Mother Chrystal licks her newborn calf just moments after his birth Sunday, encouraging him to stand and nurse./Dallas Zoo

The Dallas Zoo has welcomed a leggy, 6-foot-tall baby giraffe, born Sunday to first-time mother Chrystal. The energetic male calf weighs about 120 pounds and appears to be healthy.

His arrival wasn’t without excitement. Giraffe keepers and the veterinary team had closely monitored the pregnancy, including using ultrasounds, and were prepared. When 6-year-old Chrystal’s labor halted after about two hours, the team quickly moved her into a special, custom-built chute in the giraffe barn. There, keepers were able to restrain her without using anesthesia, a risk they wanted to avoid for the health of both mom and calf.

With Chrystal safely ensconced in the chute, the veterinary team moved in quickly. Jan Raines, D.V.M., determined that the calf’s head and neck were positioned to the side of the front legs, instead of aligned with them. Raines was able to move the calf’s head and neck into the correct position, and Lynn Kramer, D.V.M., and the giraffe keeper team delivered the newborn. They gently lowered it more than 6 feet to the ground. Then they moved the calf into the barn’s maternity stall, equipped with extra layers of soft sand and overhead video cameras. Chrystal immediately joined the calf, licking him and nudging him. Soon he stood on wobbly new legs, and began to nurse shortly after.

“The chute and our team’s training definitely paid off, allowing us to provide excellent emergency care to Chrystal and the calf,” said Kramer, who is also the Dallas Zoo’s vice president of animal operations and welfare.

“A new giraffe is always a reason to celebrate,” Kramer added. “They’re remarkable animals, and are seriously threatened in the wild. Conservation is a key mission of our zoo, and this calf’s birth will allow us to offer a timely teaching message about the efforts being made on their behalf.” 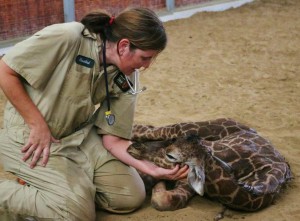 Jan Raines, D.V.M., checking out the calf shortly after the delivery./Dallas Zoo

“We were keeping a close eye on Chrystal,” Fitzgerald said. “It’s been three years since we had a calf, so our team is quite excited. Caring for a newborn this big is always a challenge, but it’s one that we love.”

Zoo staffers are now observing to ensure the calf is nursing and meeting appropriate developmental milestones. The calf could go out into the feeding habitat, with limited access, as soon as next week. For about three months, the baby and Chrystal will stay indoors together during the evening, until the calf is big enough to be with the herd at nighttime.

The calf is a reticulated giraffe, a species with fewer than 4,700 left in the wild, according to the Giraffe Conservation Foundation. The father is the gregarious Tebogo, one of the Dallas Zoo’s most popular residents.

Tebogo is the zoo’s only breeding male under the Giraffe Species Survival Plan’s (SSP) program to ensure genetic diversity within endangered species. Tebogo also is the father of the last giraffe calf born at the Dallas Zoo, Jamie, born to Katie in July 2011.

The new calf stuck close to mom Chrystal’s side on Tuesday./Dallas Zoo

The giraffes live in the Giants of the Savanna, an award-winning 11-acre habitat in the heart of America’s blackland prairie. The Savanna is the only habitat in the United States where giraffes mingle alongside African elephants, impalas, zebras, ostriches and other animals, as they would in the wild. Eventually the calf will integrate with these other animals.

Watch this sweet video of Chrystal and her baby bonding after birth. 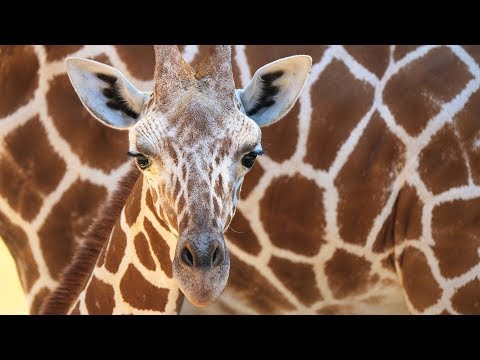 23 thoughts on “IT’S A BOY! Meet our long-legged baby”