The chattering of a rattlesnake’s tail, warning that you’re getting too close, is chilling to many people who aren’t snake fans. But rattlesnakes serve a critical ecological role, keeping rodent populations in check and controlling the spread of diseases. 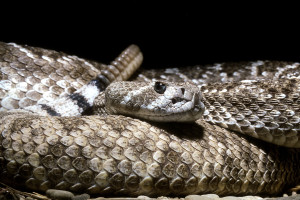 The Western diamondback rattlesnake is the largest western rattlesnake, and the most harmed snake in Texas rattlesnake roundups.

These reptiles are worthy of our respect and protection, yet they’re being driven from their dens, transported to “rattlesnake roundup” festivals, then slaughtered in a misguided effort to clear areas of these declining keystone predators. This spring, the Dallas Zoo’s reptile experts are taking a stand against these inhumane events.

“It’s senseless killing of these animals,” said Ruston Hartdegen, Dallas Zoo’s curator of herpetology. “More Americans are killed every year by dog bites, bee stings, and even lightning strikes than by rattlesnakes.”

Most states have outlawed rattlesnake roundups, but Texas, Oklahoma, Alabama and Georgia continue to let these commercial events thrive.

Months before a festival, the rattlesnakes are flushed out of their dens with gasoline and other toxins, which hurt untargeted animals as well. They’re stored in large masses in inadequate conditions and arrive at roundup events starved and dehydrated.

“It’s a carnival atmosphere where people watch as the snakes are strung up alive, then decapitated and skinned, often with children helping,” Hartdegen said. “Roundup organizers promote the snakes to be dangerous, yet they’re teaching these kids irresponsible and potentially harmful behavior.”

In an effort to halt these cruel roundups, the Dallas Zoo is supporting the second annual Texas Rattlesnake Festival in Round Rock on April 11-12. It’s a no-kill festival created to celebrate, rather than destroy, misunderstood rattlesnakes. Dallas Zoo staff will have a booth set up with kid’s activities, and visitors can meet our reptile keepers and learn about rattlesnake conservation – and why these remarkable creatures matter.

“We ask our guests to take a stance and protect rattlesnakes by not supporting rattlesnake roundups,” Hartdegen said. “Rattlesnakes don’t have vocalizations, so they rattle to warn people to stay back. They may not be an animal that people traditionally empathize with, but they absolutely feel pain and deserve better treatment.”

The Association of Zoos and Aquariums (AZA) also stands behind efforts to end the cruel and ecologically destructive practice of rattlesnake roundups, and encourages its member institutions to actively oppose such activity through public education and the support of legislation. The Dallas Zoo and other AZA-accredited zoological parks are committed to conservation and education about wild places and wild creatures.

To learn more about the Texas Rattlesnake Festival, click HERE.