An amazing spring for our Bird Team

While giraffe and ocelot babies have gotten a lot of attention at the Dallas Zoo this spring, our world-class bird department quietly has been notching success after success in breeding remarkable, threatened animals. The births are very carefully planned under recommendations from the Species Survival Plans, coordinated through the Association of Zoos & Aquariums to help ensure the survival of endangered species.

Here are just a few of the new hatchings, and why they matter so much:

White-backed vultures: One chick, hatched May 25. This is a remarkable achievement; we’re just the fourth North American zoo to hatch these African birds, and the first in 16 years to do so. There are only 13 white-backed vultures, including our chick, in U.S. zoos.

Kori bustards: Two chicks. These threatened African birds are among the heaviest flighted birds in the world; the males can weigh more than 40 pounds when full-grown. They’re being raised off-exhibit, so you can’t see them just yet. These new additions give us seven! 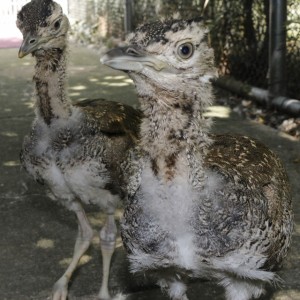 African spoonbill: Six chicks, making us home to 22, more than any other U.S. zoo. (And we expect to have a few more soon, too!) The chicks are being raised off-exhibit so they continue to thrive, but you can see our adult African spoonbills in the A.D. Martin Forest Aviary in the Wilds of Africa.

Yellow-billed storks: Three chicks, giving us 14.These hatchings are hugely significant, because they’re genetically important key players in the Species Survival Plan. There are only about 50 in U.S. zoos, and 14 of them are at the Dallas Zoo.

Southern ground hornbill: One chick. Only a handful of these threatened African birds hatched out within the last year in the United States. These are the “wolves of the bird world,” living in family groups. You can see them along the monorail habitats when it reopens this fall.

Marabou storks: Four chicks. These African birds are being raised off-exhibit, but one is being raised by its parents in an outdoor nest among the Bush Overlook in the Wilds of Africa. You’ll need a sharp eye to spot the nest! These baby birds look a lot like pterodactyls, but we promise they have nothing to do with the Giants of the Jurassic exhibit. These new babies are significant because husbandry of this species is challenging. 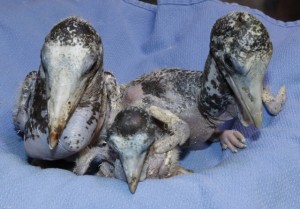 Waldrapp ibis: One chick. This little one is extremely significant because Waldrapp ibis are the most critically endangered bird at the Dallas Zoo. They’re native to Morocco and one or two other places in the world, but only a few hundred remain in the wild. About 150 live in U.S. zoos, including our 12. (Harrison Edell, our senior director of Living Collections, is the coordinator of the Species Survival Plan for this species.) Meet the Waldrapp ibis in the Forest Aviary, along the Gorilla Trail in the Wilds of Africa. 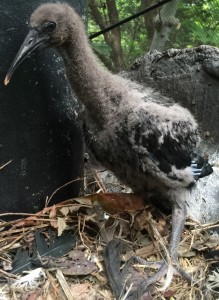 Hadada ibis: Two chicks, both hatched in the past three weeks. These African birds, easily distinguishable by their long, thin beaks and iridescent feathers, aren’t easy to breed. They’re being raised off-exhibit, but you can see adult Hadada ibis in the Forest Aviary. (Edell is also the SSP coordinator for these.)

African black-footed penguin: One chick. As previously noted here on ZooHoo!, this April 15 hatching is the first penguin chick ever at the Dallas Zoo, making it the tenth member of our exhibit flock. The chick now weighs about 6 pounds, and is beginning to grow feathers to replace its soft gray down. Once those feathers grow in, the chick can begin to practice swimming in Don Glendenning Penguin Cove. 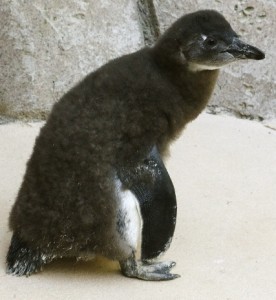 King vulture: One chick, our newest, hatched June 6. The strikingly unique birds have beautifully colored orange-and-purple heads, hairless as is typical of vultures. (It keeps them cleaner, since they are carrion eaters.) They’re native to Central and South America, but you’ll find ours on Wings of Wonder in ZooNorth.

“A combination of factors contributed to our success this spring,” said Sprina Liu, the Dallas Zoo’s bird curator. “First and foremost, our bird keepers have a total of over 300 years of experience, and many came here with experience from other institutions. So we have a strong team that keeps a close eye on the birds to ensure they have the environment they need to breed successfully.

“We give the adults what they need to breed and they do the rest,” Liu said. “If not, having the observational and technical skills to identify problems and decide what to do is vital. If we encounter problems, we methodically review each step of our management (both historical and current), how the birds or chicks reacted to it and what we need to do to make it better. We did that many times this year, and depending on the situation, we modified our approach every few hours.

“In addition, we have strong animal nutrition and veterinary staffs that react immediately to changes that needed to be made.

“And lastly, while much has to do with skill, in some situations I think just plain dumb luck helped us out,” she added with a smile.

The Dallas Zoo’s bird experts will continue to work with SSP coordinators for these birds to determine where they will be placed.