Posted on September 11, 2015 by Anna Campitelli

About an hour’s drive northwest of Abilene, the ranch was established to study habitat management for bobwhite quail in West Texas in hope of identifying optimal conditions for sustainable hunting.

“Fortunately, the conditions here that cater to quail – dry areas with sparse vegetation and loose soil for digging or burrowing – are also perfect for horned lizards,” Lawrence says.

Lawrence’s eyes concentrate on the road ahead, looking for the telltale movement of horned lizards.

Suddenly, Lawrence shifts the ATV into park and hops out, his eyes focused on the spot where a lizard just darted into the brush. Crouched low, he carefully scans the vegetation (while also keeping a lookout for rattlesnakes), searching for where his target has now flattened down and camouflaged with its surroundings.

When Lawrence emerges, he’s holding a small, gray-and-tan male with brown spots, a white stripe down its back and small horns covering its head and flat body. “This one’s about a year old. Adult females can be as long as your hand,” Lawrence says.

Lawrence checks for evidence of a previous capture, which allows them to compare new measurements to previous data. He scans the specimen – no ID found.

Next, he goes through a checklist of measurements on his digital GPS/data collection device.

After noting the gender, he takes down the animal’s snout-to-anus length (55mm – anything over 50mm gets tagged) and total length (80 mm). Using a spring scale, he records its weight (11 grams).

Lawrence takes a ground temperature with an infrared thermometer (106 degrees) and a UVB light-reading scan with a radiometer. Lawrence also notes whether the lizard was captured near a harvester ant nest – a species which accounts for 80 percent of the horned lizard’s diet. In this case, a large colony resides just a few feet behind the ATV.

Horned lizard mating is observed often on the protected land.

Then, Lawrence indicates any notable behavior displayed during the capture. Horned lizards have three defense mechanisms – the first being very unique. When threatened by coyotes, they squirt blood (containing a chemical that deters canids) from their eyes up to four feet away. For some predators, they stand up on their side and inflate, trying to look larger and more intimidating. For birds of prey and rattlesnakes, “they usually take off,” then rely on camouflage – as this one did.

Finally, it’s time to insert a passive integrated transponder (PIT) tag, the same kind of chip used to help identify lost dogs and cats. Lawrence swabs the lizard’s side with alcohol. Then he uses a small syringe to inject the tag just under the lizard’s skin, sealing the small entry wound with a vet-grade tissue adhesive that dries in seconds.

“It’s basically blue superglue that costs nine times what superglue costs,” Lawrence says. “But we use it, because it’s nothing but the best for these guys.”

Finished collecting the information he needs, Lawrence takes the lizard to the edge of the road and gently places him on the ground. The lizard freezes for several seconds, then waddles for cover and disappears.

Before leaving this site to find more lizards, Lawrence returns to the back of the ATV and pulls out a handheld vacuum cleaner.

To feed the Zoo’s Texas horned lizards (which staff eventually hope to breed), Lawrence currently has to order harvester ants online and rush-ship them from a supplier in Utah. So he happily sucks up some free ants, carefully emptying the dust canister into a plastic container to avoid their unpleasant stings. 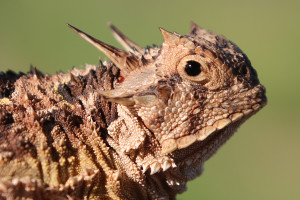 During this expedition, it’s hard not to fall in love with horned lizards. While resembling small, fierce dinosaurs, they don’t bite or scratch and are so docile that they fall into a near-trance if you stroke their smooth bellies.

“They’re one of the gentlest animals on the planet,” Lawrence says. “Once you see a horned lizard in the wild, it’s almost everybody’s favorite animal from that point on. They’re so awesome.”

WATCH footage from out in the field. For more information on this project visit the Texas Horned Lizard Conservation website. 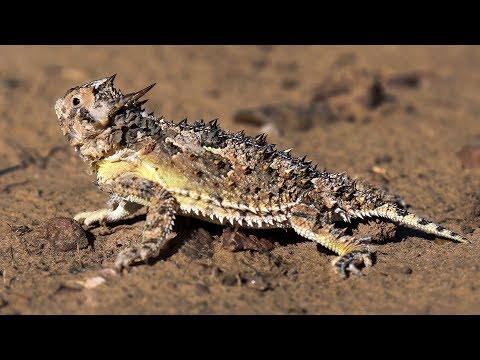