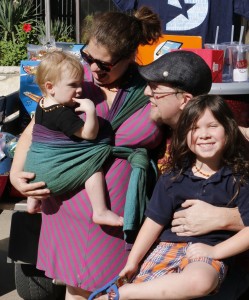 Jonathan and MJ Martin and their sons, Zachariah and Corwin, were the Zoo’s millionth family Wednesday.

The Dallas Zoo surprised its millionth visitor Wednesday with a BIG celebration. Parents Jonathan and MJ Martin and sons, Zachariah (4 years old) and Corwin (16 months) from Anna, Texas, were the special family that helped the zoo top the mark for first time in its 127-year history.

“We are so proud to have consistently reached monumental attendance milestones the past five years, but today’s millionth guest is the one we’ve been waiting for,” said Gregg Hudson, Dallas Zoo president and CEO. “Our community supports us and recognizes the changes we’ve made in recent years.”

This milestone also marks the zoo’s sixth consecutive year of record attendance. Of the 228 facilities accredited by the Association of Zoos & Aquariums (AZA), the Dallas Zoo now joins only 30 others to reach a million visitors annually.

“The Dallas Zoo has transformed into one of the best zoos in the country,” Dallas Mayor Mike Rawlings said. “One million visitors from across the nation this year have seen this incredible facility, and how a successful public-private partnership can bring about a remarkable renaissance. We’re proud to boast about our world-class zoological park, including the award-winning Giants of the Savanna habitat. I congratulate the zoo’s leaders and staff on their hard work that’s led to this milestone.”

Staff cheered on the surprised guests Wednesday morning as zoo leadership greeted the family. The Martins were awarded with an exclusive prize package including game tickets to the Texas Rangers and Dallas Mavericks, a tablet from AT&T, a hotel getaway at the Hyatt Regency Dallas, and more. The family was taken on a special tram ride to Camp Okapi for an up-close animal experience, followed by a chance to feed an African elephant, and a free lunch at the Prime Meridian restaurant in Zoo North at a specially decorated table.

All guests Wednesday received FREE rides on the zoo’s Endangered Species Carousel and the T-Rex Mini Express as part of the celebration. Tom Thumb also donated cupcakes for guests to enjoy.

The attendance record adds to several major recent accolades for the zoo, including:

–          Fourth consecutive Certificate of Excellence award as one of the world’s best businesses by TripAdvisor, the largest travel reviewing and planning website, and maintains a four-star rating on Yelp and a 4.5-star rating on Facebook.