Now is the time to learn to be a gorilla.

Deep in the heart of a remote forested mountain in rural Democratic Republic of Congo (DRC), 14 highly endangered, orphaned Grauer’s gorillas are learning how to survive on their own.

No longer are the days of easy meals from caretakers who hand-picked 600 pounds of fresh vegetation daily for the growing great apes. The youngsters now must forage for their own food daily on two dozen acres in their one-of-a-kind forest enclosure.

In their short lives, these innocent gorillas have been through the unimaginable. As infants, they lost their parents to poachers who killed them for bush meat, then were violently torn from the forest, destined for a sad life in the animal trafficking trade.

But their resiliency is inspiring. And thanks to some noble wildlife conservationists, with help from the Dallas Zoo and a few others in the U.S., these young gorillas are thriving again in the forest. 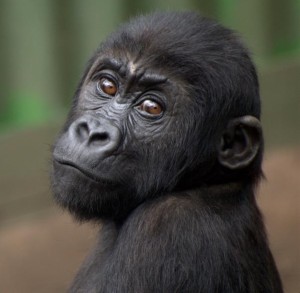 Amani, whose name means “peace”, was confiscated in April 2009. She is one of the most gentle gorillas at GRACE./GRACE

Closely related to the better-known mountain gorilla, Grauer’s gorillas, or eastern lowland gorillas, are the largest subspecies, making them the largest primates in the world. They only live in eastern DRC, where researchers believe only 5,000 remain.

Pressure built as word spread about the growing number of Grauer’s gorilla infants illegally held by poachers and traffickers. In 2008, the parentless infants were saved from the pet trade by the Congolese Wildlife Authority, but officials scrambled to find them a permanent home.

In 2009, GRACE was created — the Gorilla Rehabilitation and Conservation Education Center, the only facility in the world dedicated to rehabilitative care for Grauer’s gorillas. Soon after, the babies were moved to their new home to begin the long recovery process.

A gorilla scales a tree in the 24-acre forested enclosure, overlooking the mountain range./Andrew Bernard, GRACE

GRACE is a 370-acre, forested safe haven near the Tayna Nature Reserve in eastern DRC. This spring, the non-profit finished an unprecedented project, and the Dallas Zoo was honored to be part of it. With financial and expert help from us and a few other U.S. AZA-accredited zoos, GRACE opened a 24-acre protected forest enclosure for the orphans. It’s the largest of its kind in the world.

Send in the expert

After traveling for eight days there and back by many forms of transportation (with a few flat tires), Dallas Zoo mammal Curator Keith Zdrojewski’s first trip to GRACE two years ago remains one of the best experiences of his career. 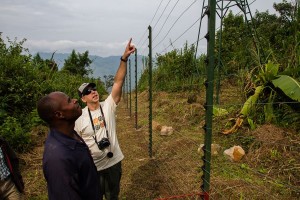 Nestled inside the mountainous nature reserve 6,000 feet above sea level, 17 GRACE staff members and Zdrojewski set out to string 20 miles of hotwire to the enclosure’s 12-foot-tall perimeter posts. Dubbed the “hot-wire expert,” this was still no cakewalk for Zdrojewski.

“The fact that GRACE took this on with no roads to bring the materials in was amazing,” he said. “They had to install 330 posts, with holes 3 feet deep, and they dug it all out by hand.”

Zdrojewski also helped design a corridor and built a door connecting the outdoor gorilla yard to the new 24-acre enclosure, giving the gorillas access to the forest.

In February, Zdrojewski ventured back out to the remote region to oversee the historic release of the youngsters.

“It’s always been a dream of mine since I was a child to see gorillas in the wild,” he said. “But to help orphaned gorillas has been 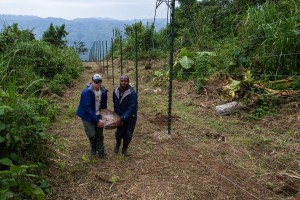 even more fulfilling, especially seeing the good work people are doing for them.”

Zdrojewski spent a few days lending elbow grease, making sure the enclosure was completely sound and running staff drills for potential emergency situations. On his final day at GRACE, satisfaction took over.

“The only thing separating us was the hot-wired perimeter we built. They were so close, I could hear them breathing,” he said. “It was very emotional for the people who had been there since the beginning, putting in hours of blood, sweat and tears. You could see their relief and excitement.

“The gorillas ran through the forest, made their paths and climbed up the trees. They were seeing natural wildlife again for the first time in years and learning how to deal with the dangers.”

Once physically and emotionally fragile, now the young gorillas are flourishing. They’re becoming self-sufficient, especially in relational acceptance of each other.

“Amazingly, they’re all very well-rounded,” Zdrojewski said with a smile. “They seem to accept new members of their separated troops very easily. They get along so wonderfully, it’s as if they all know the struggles they went through.”

About 26 local staffers care for the gorillas daily, and other villagers helped build GRACE’s infrastructure in 2009 and the new forest enclosure. The nearby village of Katoyo donated the land on which GRACE was built. These residents once again know gorillas.

“These people are proud to have gorillas living in their mountains again, instead of being killed for the bush meat and pet trade industries,” Zdrojewski said. “The community is taking a major role in this. They want to save gorillas.” 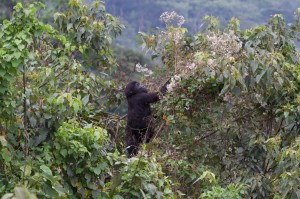 A gorilla forages for food in its new forest enclosure./Andrew Bernard, GRACE

Each morning at GRACE, the 14 orphaned gorillas shift from their night quarters into the enclosure for a day full of exploration. There, in the protected forest, they scale mountains, climb trees, mingle with monkeys, birds and more, and forage for their next meal.

GRACE’s ultimate goal is to reintroduce the Grauer’s gorillas back into their natural habitat.

“Everything we do at GRACE keeps this aim in mind. This is the primary reason that we built the 24-acre enclosure – to give gorillas access to a forest so they can practice skills needed for survival in the wild,” said Sonya Kahlenberg, GRACE’s executive director. “We are also closely monitoring their behavior to assess their rehabilitation progress and readiness for release. We are working with our partners in DRC as part of the Conservation Action Plan for Grauer’s gorillas to locate a suitable release site for the gorillas that will help bolster the dwindling wild population. Any reintroduction that occurs will need to be carefully planned and follow the International Union for Conservation of Nature (IUCN) guidelines.”

And until that day comes, work at GRACE doesn’t stop. With 1-2 orphaned Grauer’s gorillas entering the center each year, GRACE is expanding the night quarters.

“The best-case scenario would be if no more gorillas came to GRACE, since these gorillas belong in the wild, but that’s not the reality,” Kahlenberg explained.

GRACE is also building a quarantine facility for gorillas and recently hired a veterinarian who will oversee animal care and help the Congolese staff advance their veterinary skills.

“The Dallas Zoo has been a long-time supporter of GRACE, and we are so appreciative of this partnership. The zoo not only provides financial support for our programs, but it also goes above and beyond to lend us needed expertise,” said Kahlenberg. “Dallas Zoo’s president and CEO, Gregg Hudson, has played an important leadership role in GRACE for years as a member of our Board of Directors, and curator Keith Zdrojewski serves on our Animal Care and Welfare Advisory Group. Keith’s most recent visit to GRACE was especially important, because he conducted the final safety inspection of the forest enclosure and provided both technical and moral support to our team when they first introduced the gorillas to their new habitat.”

As GRACE’s staff and gorillas continue to settle in, Zdrojewski says his expertise is becoming less needed. 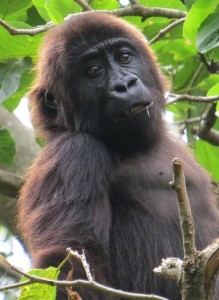 “We still talk monthly, but the staff is becoming so great at what they do that the calls are just becoming more of updates,” he said. “I’m so proud to have been a part of this, to go over there and make a small difference in the animals’ and locals’ lives. It meant more to me than to them.”

Three-year-old Kalonge arrived at GRACE by helicopter in late July after she was found trapped in a snare by villagers near Kahuzi Biega National Park. She was sick and thin, with a snare wound on her wrist. Before her trip to GRACE, Kalonge was cared for at the Senkwekwe Center in Virunga National Park, where she had several unfortunate setbacks, including a respiratory illness and a fractured femur from falling out of a tree.

Once she healed, Kalonge safely landed at her saving GRACE. She met her new great ape family, revealing another reason why these young parentless gorillas are so remarkable.

“All of the gorillas have been through so much in their short lives, including watching their families be killed and enduring terrible conditions after capture. It is wonderful to see the social bonds they have formed with each other and how they are helping one another heal. Their resiliency never ceases to amaze us.”

Kalonge and her 13 adopted siblings are the fortunate ones, with a second chance at life as an option because of conservation heroes who refuse to let them suffer. Now, they know love; they know family; and they know how to be gorillas.

WATCH footage from Keith Zdrojewski’s GRACE trips and hear from him on this meaningful partnership. 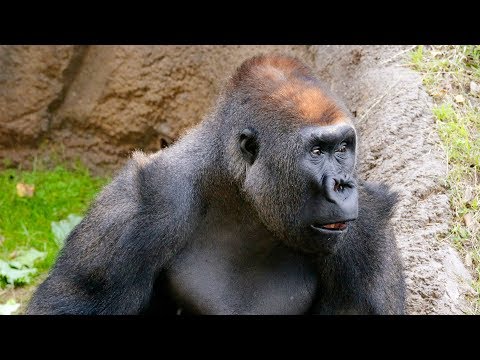 One thought on “Helping orphaned gorillas find their way”