A mandrill puzzle: How we brought a broken troop together

When nearly 18-year-old mandrill Milo, the beloved father to Obi, passed away suddenly from a form of lymphatic cancer in June 2014, Dallas Zoo staff were at a loss. Born to Saffron, a first-time mom, Obi was just a few months old. This left a mandrill troop of only mother and baby, along with Kumi, a geriatric female who recently had lost her sister.

Keepers were left with an unusual predicament. Obi needed an older male around to learn how to behave, and how to become a respectful member of the troop.

Leaving just Kumi and Saffron as Obi’s sole troop members wasn’t the best option. Kumi and Saffron have their differences — both had sisters with whom they closely bonded, but neither had any loyalty to each other. Saffron is an extremely dominant female, and Kumi is more reserved.

Mandrills typically live in troops, with one dominant male, his harem of females and their offspring. Even juvenile and subordinate males will live under the dominant male’s leadership, helping him protect the females. At 2.5 months old, little Obi was far too young to assume that role. We wondered how he would have any clue what to do when he reached that age, without a male figure paving the path for him? 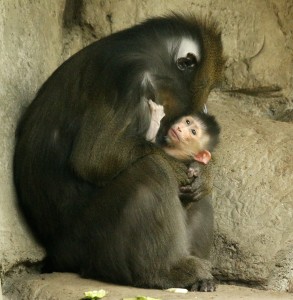 Milo’s sudden loss was unexpected. Bringing in a new, seasoned male mandrill was the natural solution. However, this wasn’t that easy. In the wild, mandrills are threatened to endangered, and it is difficult to form mandrill troops in AZA-accredited U.S. zoos due to their complicated social structure and the number of suitable males available.

We were left with few options. Ideally, little Obi would one day inherit the troop, which even further limited our options, since he was so young. Male mandrills aren’t fully mature until 9 years old, so Obi had quite a while to go. Most males of the proper age at other AZA-accredited zoos already had established troops. And younger males that had been pushed out of their troops when they became a threat to the dominant male weren’t quite mature enough to join us.

It also concerned us that bringing in a spry, young mandrill eager to prove himself to Saffron (who is particularly sassy), could pose a threat to her new bouncing baby. Some primates won’t accept the offspring of another male and will kill an infant to ensure the success of their own genetics, similar to when male lions take over a new pride. 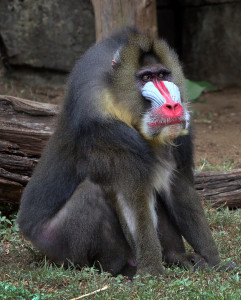 Savuti fits right in with his new family troop.

Obi is the first mandrill born at the Dallas Zoo in almost 25 years. We wanted to make sure he grew up to be a healthy troop member. Our needs for a male role model for Obi were very specific. What were we to do?

Then Savuti comes in. Savuti, a 23-year-old male mandrill from the Buffalo Zoo, seemed to be the perfect male for the troop. He lived with two older females at the Buffalo Zoo, but they had both since passed away. Monkeys are very social animals, and have a better quality of life when living with others of their species.

It was just as important for Savuti to find another troop as it was for Obi to have a father figure. However, geriatric animals, like Savuti, need specialized care and modified exhibits and barns to accommodate their aging. Some zoos aren’t equipped to take on the challenge – but we were. Honestly, aging animals in accredited zoos really have it made! In the wild, if an animal is unable to climb and keep up with the group, they usually won’t survive very long. In zoos, we make every effort to keep the elderly comfortable, safe and happy.

Little old Kumi is the most reserved member of the mandrill troop.

We knew Savuti would be a beneficial troop member for several reasons. Baby mandrills are quite a handful! But they also need to be able to follow the troop as they travel through the forest, so they are naturally equipped to be tough and rather self-sufficient. As Obi was quickly becoming a typical precocious young mandrill, we knew he could get away easily during introductions if any aggression occurred. We also knew Savuti would be unable to catch him easily in his advanced age.

Also, since Saffron is a feisty lady with high-ranking status, we were confident she would protect baby Obi. And we can’t forget about little old Kumi! She and Saffron are not BFFs by any means, and a male presence was essential to keep order within the troop. We thought an older male with limited mobility would be perfect for Kumi and Obi, as introductions can be very active.

Savuti made the journey from Buffalo to Dallas and arrived just before the huge blizzard in the Northeast, narrowly avoiding feet of snow. After a standard 30 day quarantine period, he was introduced to the mandrill barn. A “howdy” door was placed between the two rooms so he could see and interact with our girls and Obi. “Howdys” are a great way to determine how the animals will take to each other. 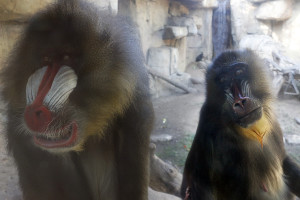 Savuti and Saffron hang out at their favorite spot together.

Their interactions were uneventful, and it was time to put everybody together. All four mandrills were let outside, with keepers and curators standing by. The face-to-face introductions couldn’t have gone better.

Saffron, who is quite the flirt, was very interested in Savuti. They grinned at each other and shook their heads (a mandrill version of hello). Saffron approached him almost right away, with Obi bounding close behind. Savuti was, at first, leery of Obi. Obi was, and still is, fascinated by Savuti. Obi immediately wanted to touch him, but when he got too close Savuti slapped the ground and bobbed his head, a common mandrill motion for “get outta here!” Mama Saffron wasn’t having it. Nobody disciplines her baby but her! She grabbed a fistful of Savuti’s hair, and he conceded. 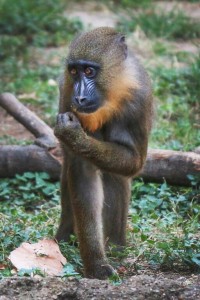 Obi is now a year and a half old.

They spent the rest of the day smiling at each other. Since that first introduction, there haven’t been any altercations. Savuti and Saffron get along famously, and at night he gets to retire from the constant activity of Obi to his own room with Kumi. The two relax in peace together like an old couple in rocking chairs.

Now that Obi is getting older and more independent, he’s often seen playing with Savuti sitting close by. When Obi gets near Savuti, he sometimes puts his little foot out, and Savuti gently holds it.

When Saffron gets some valuable time to herself, as Obi throws his favorite sticks around or finds a bird to chase, she often sits next to Savuti in the viewing windows, casually ignoring onlookers. Obi eventually will bounce up and join them, trying to wrestle Saffron or see what Savuti is eating. 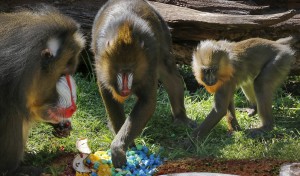 They’ve become the perfect little mandrill family, and Savuti accepts Obi as his own. Their gentle and kind interactions are more than we could have hoped for. Obi is learning how to be a respectful adult male through his observations of Savuti’s behavior.

I always suggest coming to see the mandrills right when we open at 9 a.m. That’s when they’re eating breakfast and exploring the exhibit. Savuti inevitably will end up on the ledge by the window, and Saffron and Obi join him throughout the day. Obi also loves to interact with guests, and will bounce off the windows, do flips, and be silly for his adoring fans!

4 thoughts on “A mandrill puzzle: How we brought a broken troop together”