Mourning the loss, but celebrating the life, of our oldest resident, 57-year-old chimp Bon Bon 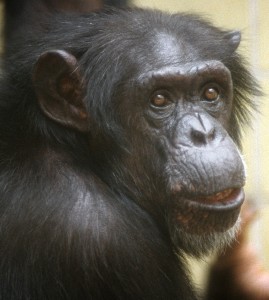 With heavy hearts, we’re deeply saddened to share news of the loss of our oldest resident, 57-year-old chimpanzee Bon Bon, who passed away this past Sunday. The matriarch of our chimp troop, she vivaciously lived to be the oldest zoo-born chimp.

In recent weeks, Bon Bon’s health had begun to decline rapidly in her advanced age. With very little eyesight and mobility, our animal care team knew it was time to say goodbye.

“She was everybody’s favorite. Since she had been here so long, staff members from all over the zoo had formed a special relationship with her,” primate supervisor Sarah Villarreal said. “People would always stop by to say hi. And she didn’t forget them. Chimps always remember.”

“Bon Bon’s quirky and charming personality will be missed by all of us. This is a huge loss to our family here,” mammal curator Keith Zdrojewski said. “As the highest-ranking female in the troop, she still had an opinion in the group, and wasn’t afraid to voice it until the end.”

The remaining eight members of the troop respectfully said goodbye to Bon Bon with hand touches and soft vocalizations.

“This allowed them to see that their matriarch isn’t there anymore. It gave them a sense of closure, and now they can determine the new hierarchy from here,” Zdrojewski explained.

After their goodbyes, the troop walked away and allowed Bon Bon’s 30-year-old daughter, Koko, to have some alone time with her mother.

“The troop let her have that time. It was very unique. Afterward, chimp Ramona embraced Koko in a hug. It was a very special moment,” Villarreal said. 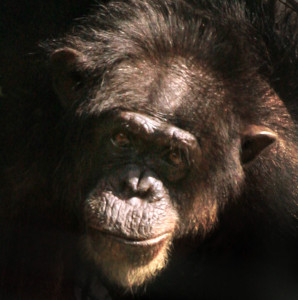 Born at the Dallas Zoo in 1958, Bon Bon was one of the first chimps to open the Primate Building in 1961 and again, our state-of-the-art Kimberly-Clark Chimpanzee Forest in 1997.

Bon Bon’s obsession with fashion items on her human companions never wavered, with nail polish and new shoes two of her favorite things. Zoo staff would take off their shoes to show her their toenails, and she would be fascinated. (For her 56th birthday last year, four of our keepers brought in different colors of nail polish, sat down near Bon Bon and painted their toes as she watched with joy.)

With four babies of her own, Bon Bon was known to be very affectionate towards all youngsters in the troop. Keeper Debbie Reid, who cared for Bon Bon for nearly 20 years, says her playful nature never ended.

“You’d see her light up when she played with the youngsters. She’d laugh with them by making a panting vocalization, and she’d tickle them nonstop,” Reid said. “With much patience, she’d allow them to climb all over her.”

And within the last few weeks, she still had these spirited moments with her adult daughter Koko.

We’ll miss you, Bon Bon. Thank you for touching our lives for so many years.

9 thoughts on “Mourning the loss, but celebrating the life, of our oldest resident, 57-year-old chimp Bon Bon”