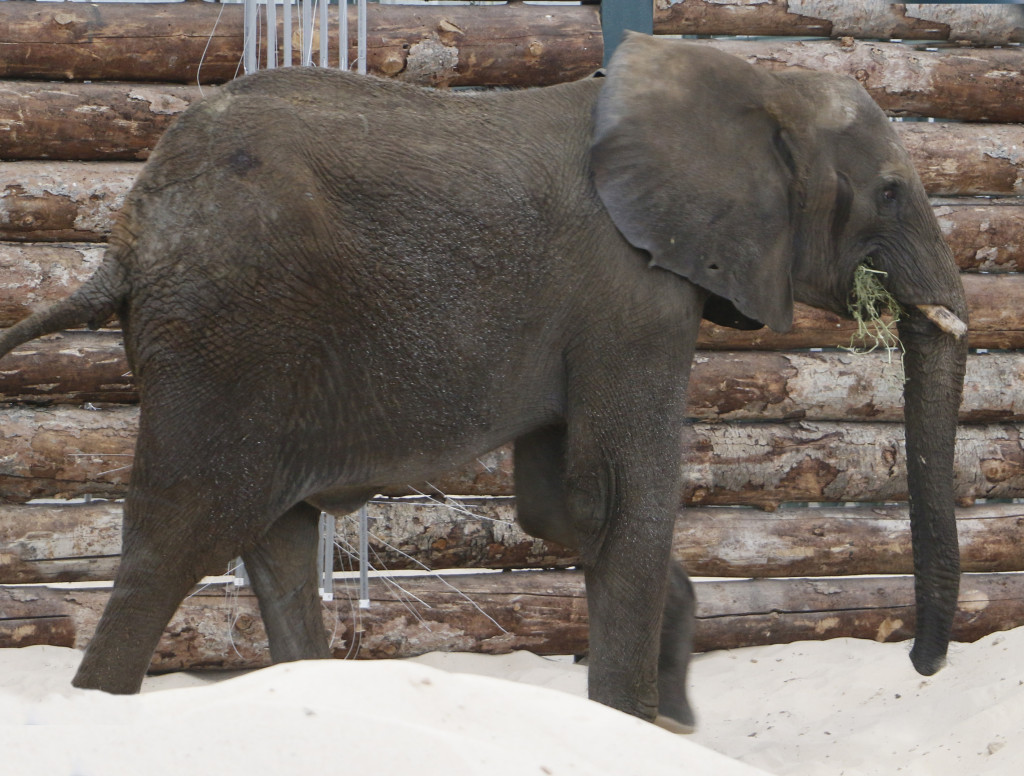 Together with our two zoo partners on Friday, we’ve successfully completed a rescue mission to relocate 17 elephants from drought-stricken Swaziland, Africa, to new homes in the U.S. The five elephants that will call our Zoo home – four females and one male – arrived today off of a special charter flight, then were whisked to the Zoo under armed escort by the Fort Worth SWAT team and Dallas Police officers.

All 17 elephants came through their travels well, eating, drinking and sleeping aboard the charter flight, which arrived just after midnight at Fort Worth’s Alliance Airport. The five new Dallas Zoo residents disembarked for the final leg of their journey beginning just after 8 a.m., and are now becoming acclimated to their new, state-of-the-art elephant barn.

The Dallas Zoo is already home to a geriatric female herd of four, fondly known as the “Golden Girls.” The new elephants do not yet have names. After a 30-day quarantine period, they will begin introductions to the Golden Girls. Guests won’t be able to see the new additions until keepers are sure they have settled in well.

We, along with Omaha’s Henry Doorly Zoo and Aquarium, Wichita’s Sedgwick County Zoo and conservation officials in Swaziland stepped up to offer these elephants a new home.

The conservation partners transported the elephants after receiving an importation permit from the U.S. Fish & Wildlife Service (USFWS) on Jan. 20, after a scientifically rigorous analysis determined that the import met regulatory requirements under the Convention on the International Trade in Endangered Species of Wild Fauna and Flora (CITES) and the Endangered Species Act (ESA).

We have held a legal permit to relocate the elephants since Jan. 20. They won a last-minute challenge by animal activists in federal court, where a judge upheld the validity of the permit and allowed the rescue to proceed. And today (Friday, March 11), the activist group which tried to delay the relocation filed a motion to withdraw its request for a preliminary injunction against the U.S. Fish and Wildlife Service. The U.S. District Court ordered that the motion is deemed withdrawn, and that the previously scheduled briefing schedule be cancelled.

The elephants came from two privately managed government parks in Swaziland, where they had been removed due to overpopulation and slated to be culled (killed). The Swaziland government declared a national state of emergency in February due to historic drought conditions. Tens of thousands of animals are dying from drought and lack of food, and the United Nations is providing assistance to 200,000 people.

“We’ve worked with Swaziland wildlife authorities for several years on this assistance project, but it escalated to a rescue mission last fall due to this state-of-emergency drought,” said Gregg Hudson, Dallas Zoo president and CEO. “Tens of thousands of animals have died, as well as people, too.”

“In addition, there are reports coming out of Africa that the drought will kill more rhinos than poachers will this year,” Hudson added. “We had to act quickly to save as many animals as possible. The well-being of these elephants is more important to us than anything.”

We’ve paid to bring in truckloads of hay from South Africa to feed elephants and other animals in the parks; however, many animals – including 38,000 head of livestock – died in the severe conditions. The urgency of the situation increased further in December when we were notified by wildlife managers in Swaziland of the death of one of those elephants that was awaiting relocation to the U.S. The death resulted from an acute gastrointestinal medical condition, which was impossible to treat in the field. We recognized it was our duty to act promptly on behalf of the remaining 17 elephants, by relocating them quickly so they could receive the veterinary care we can provide.

“There are those who would rather see elephants die than live in accredited zoos. We strongly disagree with that position,” Hudson added. “As animal caretakers and conservationists, we care about populations as a whole just as much as an individual animal. We can provide these elephants a safe future while making an enormous impact on rhino conservation in Africa, and inspiring future generations to take actions to prevent the extinction of elephants in our lifetime.”

The transfer also creates critical room for rhinos in Big Game Parks, which plans to expand its conservation efforts for these critically endangered animals. All three zoos are providing ongoing support for Swaziland’s rhino conservation program, which is expected to significantly contribute to the survival of rhinos in Africa.

“Today is a day to be grateful, and hopeful,” Hudson added. “These elephants will receive advanced veterinary care, and plenty of food and water in a spacious, stimulating, modern habitat that advances elephant families. Endangered rhinos in Africa suffering from the drought already have been moved into the bomas where these elephants had been living and will receive desperately needed support. So it’s a good day.”

For more background on this conservation effort, please visit: www.RoomForRhinos.org.