Tracking fire and wolves: A zookeeper’s trek through the Canadian Rockies 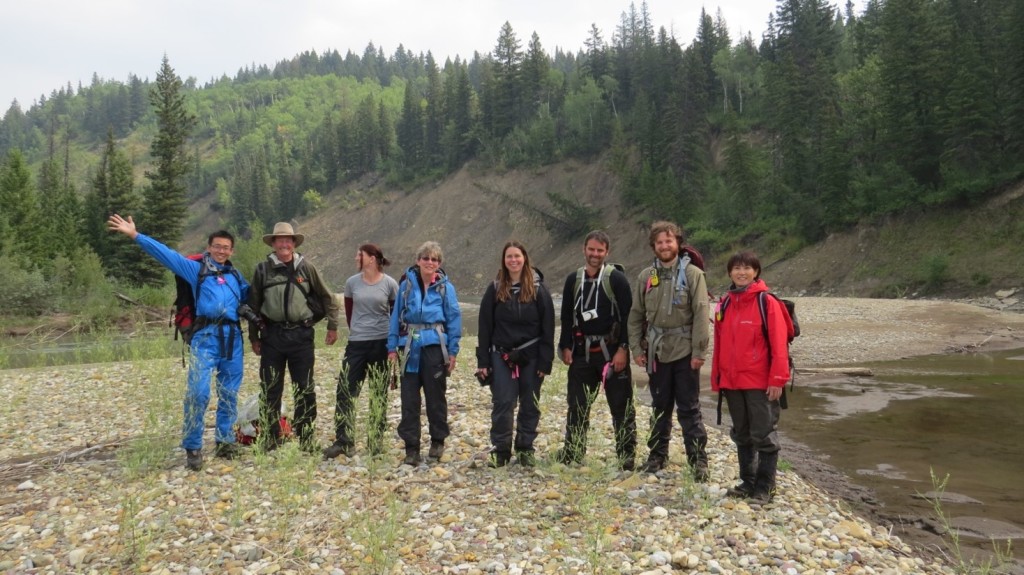 Megan’s pictured in the center, fourth from the right with the research team.

Visiting a place as part of an Earthwatch expedition, you are not a tourist, nor a spectator. You are part of a team, connected to scientists and colleagues from around the world. You are immersed in an environment and given the unique opportunity to apply your individual talents to scientific efforts toward a sustainable planet.

My Earthwatch expedition, made possible through the Dallas Zoo, plunged me into the dense aspen thickets of Waterton Lakes National Park in Alberta, Canada. Waterton is one of the wildest and most intact places in North America. The park contains six million acres of protected wilderness and all mammal species present during the Lewis and Clarke expedition. The dramatic landscape, where the Rocky Mountains abruptly meet a glacier-formed prairie, is an important refuge for carnivores. Such a rich environment is able to support a variety of large predators and herbivores alike, including moose, elk, bighorn sheep, mule deer, timber wolf, grizzly bear, black bear, and cougar. 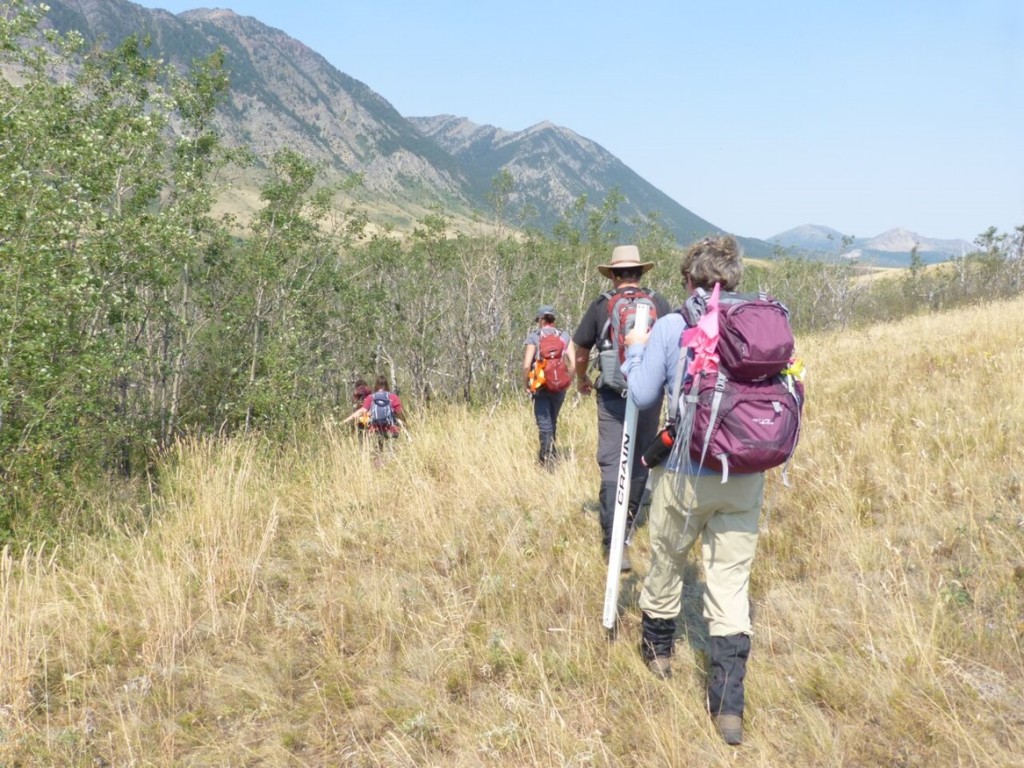 The team would walk 4-5 miles daily into the aspen.

For more than 10 years, forest ecologist and expert wildlife tracker Dr. Cristina Eisenberg and her team of field biologists have examined the effects of fire and wolves on the ecosystem in Waterton. These two forces of nature, previously eliminated from the area, have returned with striking effects. Their renewed presence has transformed the landscape into a richer and more resilient ecosystem.

“The power of nature” is a phrase we often use when confronted with images or actual experiences of storms, fires, earthquakes or other events beyond our control. We may feel a sense of fear mingled with admiration, since we have not found the ability to harness this power in order to protect ourselves and our interests from potential dangers. We know, in theory, that destruction is a healthy part of nature, but we don’t want any part of this force to truly touch our lives.

More than a century ago, a movement to “dewild” the North American landscape by removing as many potential threats to civilization as possible led to the eradication of the gray wolf throughout the United States and Canada. Populations of elk and deer exploded, ravaging plant communities, as the herbivores literally ate themselves out of house and home. 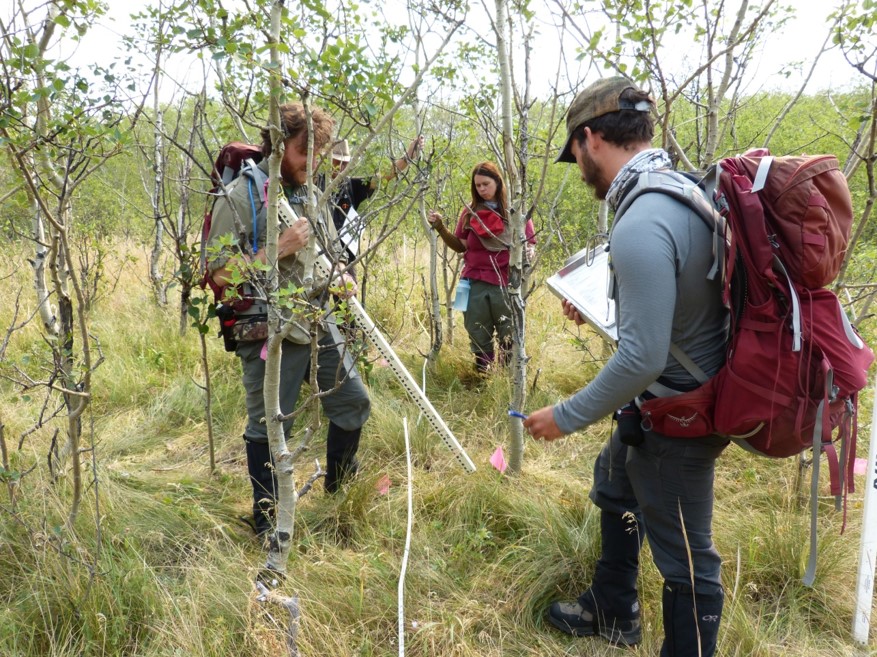 The researchers studied the utilization of the aspen by the elk. With no wolf presence, the effects are devastating on aspen, which is 75% of the elk’s winter diet. (Megan pictured center.)

Aspen, the preferred winter food of the elk, has proven particularly vulnerable to damage from overpopulation. Aspen systems are of high value in relation to biodiversity and the overall health of the community. With elk able to browse the aspen unchecked, saplings never grow into mature trees. Only old trees above browsing height survive until their natural life cycle has ended, and the aspen stand dies out completely.  Wolf removal has threatened to cause the extinction of the entire ecosystem with lasting effects not only on plant and animal life, but also on erosion, water/air quality, and the health of the landscape itself.

Over the past 40 years, changes in legislation have sought to restore balance and health to the environment by protecting wolves and other large carnivores. The wolves have returned to a handful of ecosystems. In some cases, wolves have been reintroduced to areas like Yellowstone National Park.  In other cases, the timber wolf, never fully eradicated from the far north, has slowly and fragilely begun to repopulate areas like Southern Alberta and Montana on their own.

What impact has the renewed presence of wolves had on the ecosystem of Waterton Lakes National Park? Dr. Eisenberg’s research has found that the effect of wolves consuming elk is a small part of their overall benefit. More significantly, wolf presence changes elk behavior in ways that promote the aspen.

Simply put, elk that live in an environment with no threat of wolves behave differently from elk that have experienced predation. With no fear, a group of elk can stand and munch for hours on end. They do not need to look up from their meals. They can stay in the same aspen stand for days, until all available shoots are consumed.

With only a small number of wolves, the mere threat of the wolf teaches elk to utilize the landscape differently. The elk will look up more often to scan the horizon for danger.  They will move from plant to plant/area to area. They don’t browse in the middle of the aspen stand to avoid entanglement and ambush by the wolf. They browse the aspen in a more sustainable way, allowing a number of young plants from individual stands to grow into mature trees. 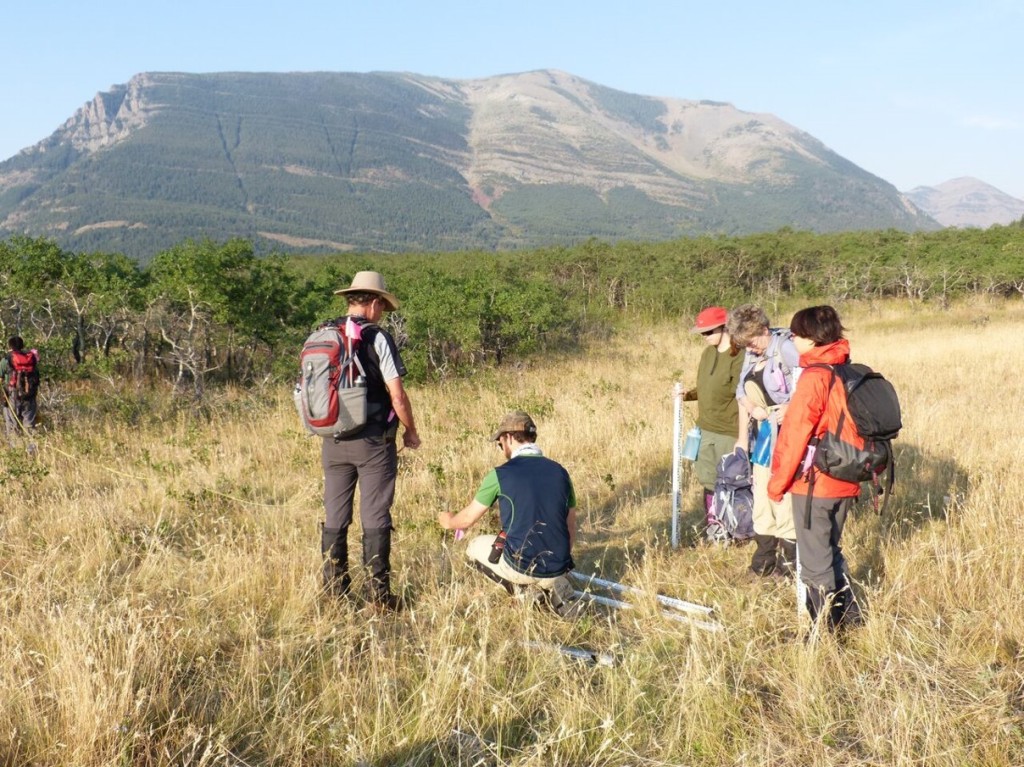 The team pounded stakes into the ground to mark the beginning of their transect into the aspen.

Dr. Eisenberg’s long-term research study has examined the browsing behavior of the elk in response to the return of the wolves. Data collected focuses on measuring the aspen stands over time, identifying and recording elk browsing activity on individual plants, and recording the presence of wolves when evidence is found. It is easy to measure the negative effects of wolf presence (as in the number of cattle lost: .06% of losses are attributed to wolves). Only through research studies like this one can we begin to measure the positive effects. Restoring keystone predators helps tip many systems back to a healthier state with minimal manipulation of physical structure, and stability and resilience are important to human survival!

As my Earthwatch team walked for miles into the heart of the research site, everywhere the evidence ofthe daily drama of life and death manifested itself in carcasses, prints, scat, and downed vegetation.  Remains of a cougar kill that was scavenged by a grizzly, prints indicating a wolf gathering by the river, an immense expanse of flattened prairie grass where the elk had spent the night. We were careful to walk deliberately with our presence known, calling out calmly, “Hello, bear” — to alert the animals of our presence, so that they could avoid us. The feeling of literally blazing a trail in a space where elk, wolves, and bears recently slept, browsed, and hunted is invigorating.

I have come from this Earthwatch expedition with a heightened awareness of our connectedness to nature, with firsthand knowledge of the benefits of biodiversity, and with a sense of hope concerning our power to affect positive change on the environment. While serious challenges persist and continue to threaten biodiversity, I have experienced the recreation of lost habitat where local ranchers have made commitments to peaceful coexistence with wildlife and work together with scientists to accomplish a mutually-beneficial existence with wild things and wild places.

One thought on “Tracking fire and wolves: A zookeeper’s trek through the Canadian Rockies”