A keeper’s tale: Extra care for a tiny newborn 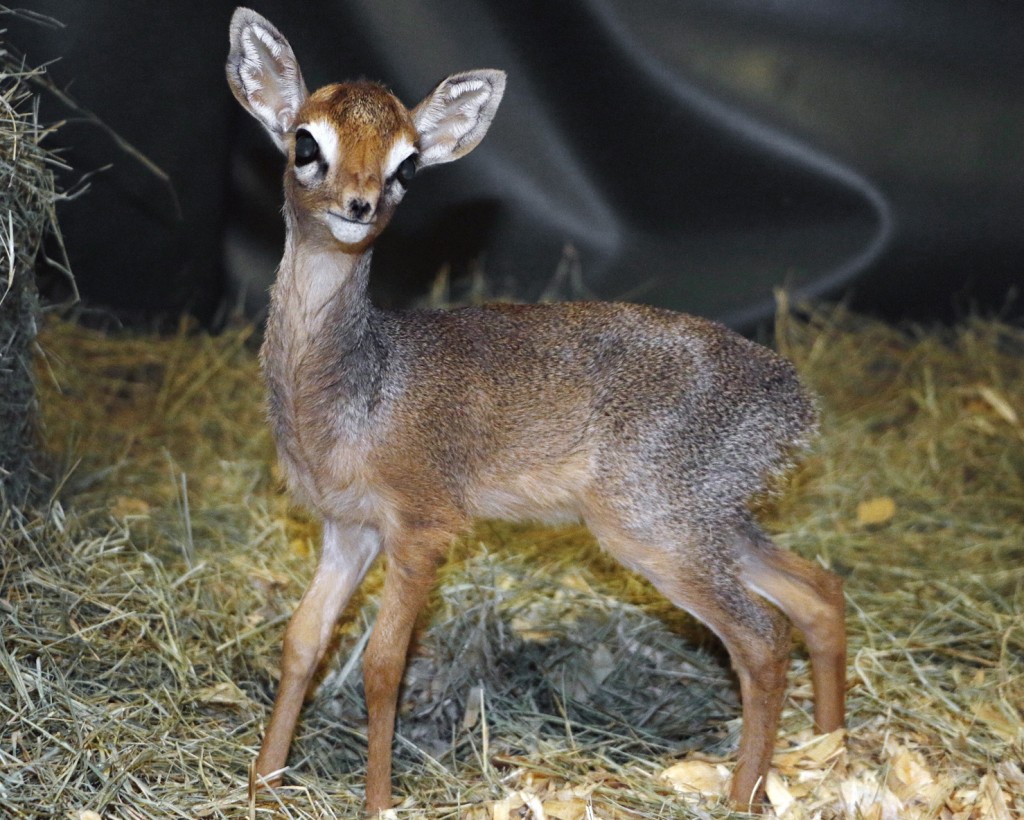 When little Dasher was born just a few days before Christmas, we were elated! Previously the Dallas Zoo – historically one of the most successful for breeding Kirk’s dik-dik – hadn’t kept a breeding pair of the tiny antelope species in 20 years.

Strong and healthy, newborn Dasher weighed just under 2 pounds at birth and stood just 7 inches. We monitored the newborn and his mother remotely through cameras in their barn prior to his birth. Unfortunately, Dasher wasn’t receiving the care he needed from his mother. When veterinarians and animal care staff realized he would need to be bottle-fed, we quickly formed a team to carry out the protocol for hand-rearing. 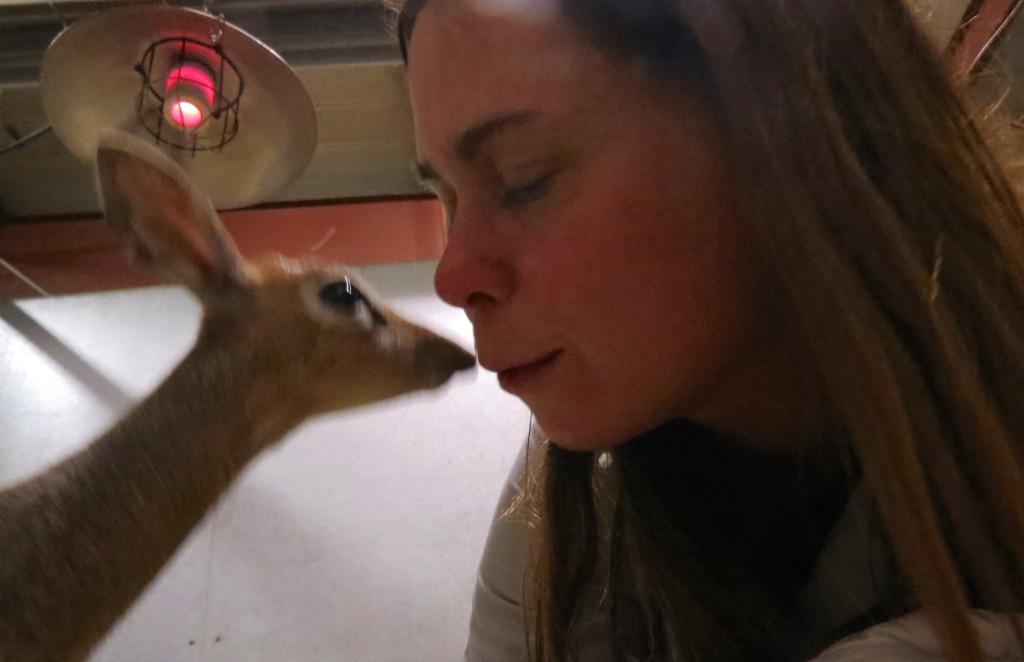 Bottle-feeding hoofstock can be challenging, but Dasher was hungry and readily accepted the bottle. Little tricks facilitated the early feeding process. He responded well to keepers leaning over him, as a dik-dik mother would do. Dasher also ate more readily when keepers simulated grooming by rubbing him with a warm, damp cloth. In the beginning, we needed to feed Dasher seven times a day, often returning to the Zoo in the very late and very early hours to care for him.

Dik-dik calves typically nest and spend most of the day separate from their mothers; therefore, Dasher slept between scheduled feedings. But when we’d appear with the bottle, Dasher would live up to his name and greet us by darting and dashing excitedly around our feet. He drained the bottle in just a few minutes, then we’d spend time stimulating him to urinate and defecate – just as his mother would do. We weighed Dasher before his first feeding early in the morning, so the feedings for the day could be adjusted according to his weight gain. 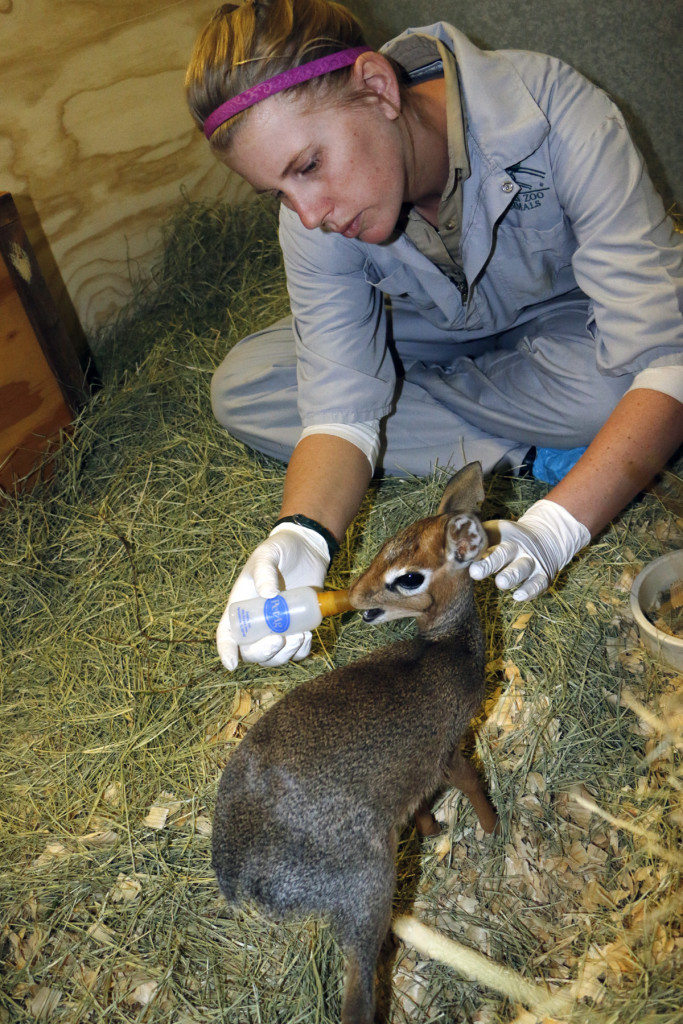 Measuring just over a foot tall as adults, dik-diks are one of the tiniest of all antelope species. Socially, male and females live in monogamous pairs and are found in the grasslands of Kenya, Tanzania, and Namibia. The name “dik-dik” derives from the sounds the tiny antelope make when alarmed and running for cover. It’s not easy being a very small animal in the wild!

Most definitely a prey animal, dik-diks are quick to react and run when frightened. However, Dasher’s frequent interactions with his caregivers taught him to be brave and bold in new activities and situations. He quickly learned to mount a scale voluntarily, to enter a crate for transport, and to allow staff to touch and lift his feet for hoofwork if needed.

Keeper staff relished time spent with Dasher. A peaceful pause during the course of busy routines, feeding time was quiet and focused – until the feeding was over, and Dasher would spring into energetic motion. Recharged with milk, he frequently would jump and scamper around his hay-filled stall. Dasher would run circles around us, vocalize with excitement, and sometimes display his mohawk. As dik-diks are typically quite secretive, Dasher’s comfort and familiarity with his caregivers made us privy to the immense charm of this tiny species.

As part of the feeding team, we all communicated closely concerning Dasher’s daily activities and enjoyed celebrating his various firsts – including the first time he urinated by himself. Zookeepers get excited about the strangest things! 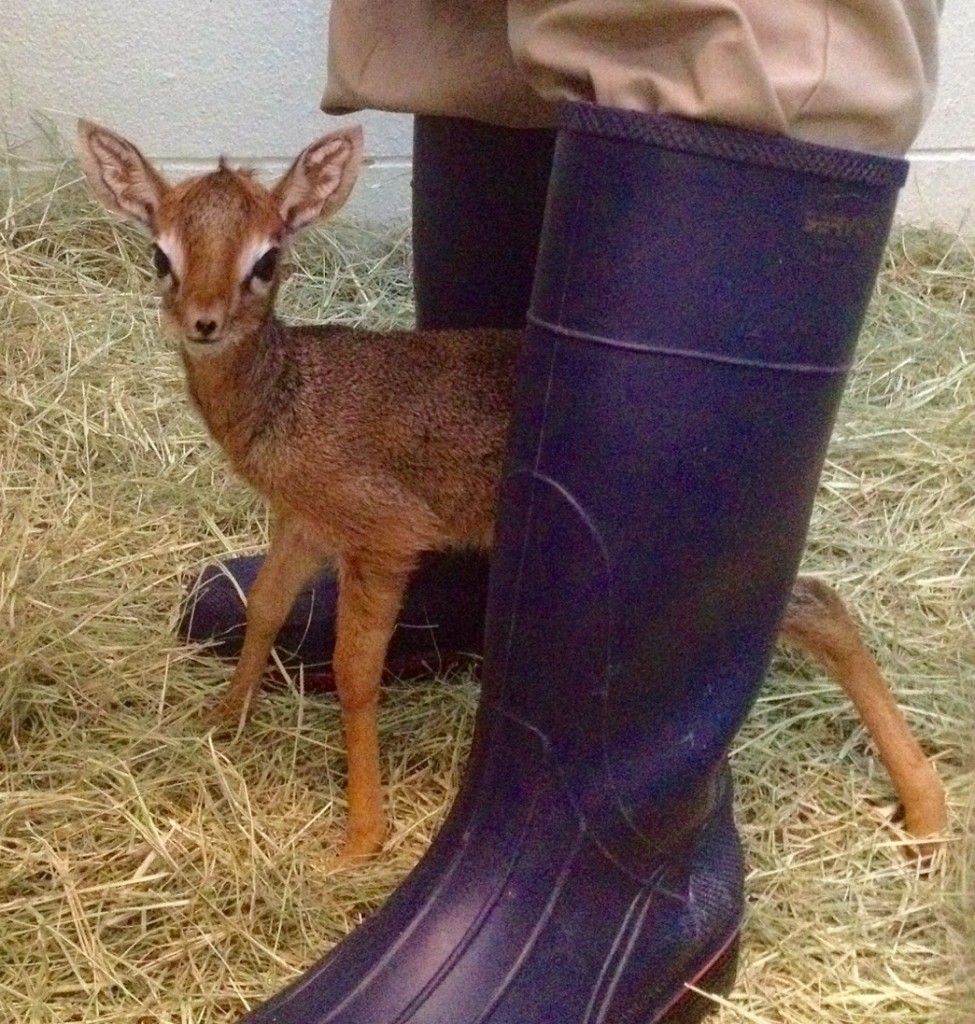 Newborn Dasher was an instant charmer with keepers.

As Dasher grew, we offered him fresh leaves and grain to introduce him to the solid foods he would enjoy after weaning. After two short months, we began to decrease his bottle feedings and increase time spent introducing solids. The weaning process was so gradual that Dasher didn’t appear to miss the bottle. His time spent with keepers remained the same positive sessions that they had been from the beginning.

At 3 months old, Dasher was reintroduced to his mother so he could learn the finer points of dik-dik behavior – basically, anything his human “mothers” may have missed. Initially, his mom avoided contact with him, but soon learned that he wasn’t looking to nurse from her. The two can now be observed lying closely together in the same barn stall overnight. As we continue to weigh Dasher and work with him closely on hoof-work training, maybe his mother will learn a thing or two from him! Dasher still has a few more months of growing to do before he can be seen in his habitat from the Wilds of Africa Adventure Safari monorail.

(See why Dasher’s name is so fitting!)

One thought on “A keeper’s tale: Extra care for a tiny newborn”