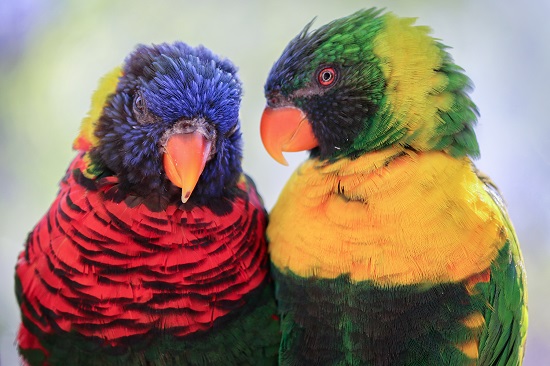 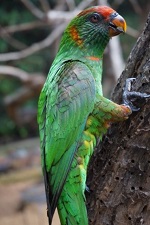 Most are rainbow lorikeets, but we also have two marigold lorikeets and five dusky lories. Lories and lorikeets are similar and fall under the same family of birds. Both are known for their specialized brush-like tongues designed specifically for drinking the nectar of soft fruits. There are a few differences, too: Lories are usually larger and have shorter, blunt tails, while lorikeets are smaller, with longer tails that end in a point.

We have 30 of these birds, ranging from 3 to 18 years old. Some are named after sounds they make – such as Volt, who mimics our radio batteries – or fruit they love, like Raspberry and Blueberry. Others have names with Australian meanings, like Dag, which means funny person or goof, and Sheila, which means woman. It takes some time to get to know each bird, but eventually they can be distinguished by looks, personality, and who they like to hang out with!

Let me introduce you to a few of our most distinguishable lorikeets:

• One of the easiest to identify is 5-year-old Lucy. She’s believed to be a hybrid between a rainbow lorikeet and a yellow-streaked lory. She’s all green with just a little red at the top of her head, which is why she’s affectionately named after “I Love Lucy.” She’s very friendly – she loves to steal nectar cups and fly away with them and unbutton shirts and jackets!

• Another easily identifiable bird is rainbow lorikeet Apple. He has a very noticeable gray ring around his eyes that extends all the way to his beak, making him look like he’s wearing glasses. He’s always one of the first to land on visitors when they walk into the aviary with cups of nectar. His best friend is Hop – they’re always getting into mischief together. 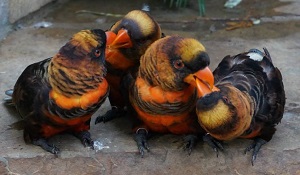 Part of the Dusky Pack

• Our pack of five dusky lories are a crowd favorite. These brown-and-orange birds are larger than the others, and Joey, Melody, Valerie, Sheila and Chiclet love to land on people in a big group and make lots of noise! Since they like to stick together, if one dusky lands on you, look out for the rest of the group coming your way.

• Some lorikeets are shyer and prefer to stay on a perch to be fed, including 13-year-old Guacamole. He is easily identified by the few missing feathers at the nape of his neck. Guacamole and his mate, Gladys, love making nests and typically can be found on the ground on the back side of the aviary. Guacamole loves nectar, but he prefers to be offered the cup while he’s on a perch, rather than an arm.

• Linguini is the smallest lorikeet. He’s a marigold lorikeet and has a bright yellow chest and green belly, unlike the orange chests and blue bellies of the rainbow lorikeets. Linguini loves to sit on shoulders and upper backs and play with guests’ hair. He’s friendlier than fellow marigold lorikeet Macaroni, who’s typically found with her buddy Pickle.

• Bruin is one of the biggest personalities. He’s like the high school quarterback – all of the female lorikeets want to be with him! He knows how popular he is, too, and uses that to his advantage to get the females to share their nectar cups.

• The largest bird is another hybrid lory, Pig Pen. He’s a very distinctive black/iridescent green color with yellow streaks around his neck and chest. Pig Pen hangs out with the dusky pack, getting into trouble.

• Sundrop is my favorite. (Shhh, don’t tell the others!) He was one of the first lorikeets I met when I started working here. I named him Sundrop because the band used to identify him is a light yellow, kind of matching the color of the Sundrop soda logo. He’s very friendly and enjoys giving “Sundrop kisses” to his favorite people. He loves to take baths and splash around in the water bowls. He’s also one of our more vocal lorikeets, often making a vocalization that sounds slightly like “pretty bird.” When he wants some quiet time, he’ll hang out in the middle window at the end of the aviary with his mate, Conan.

These are only a handful of our lovable ’keets, so mixing all of these personalities can be very tricky. It takes a lot of time, observation and creativity to keep them entertained. Their differences in personality also keep things interesting for us keepers. We each have our favorites, but all definitely hold special places in our hearts. Next time you visit, be sure to spend some time at Lorikeet Landing meeting all of our birds and getting to know them. Our staff will be glad to help you figure out who’s who!