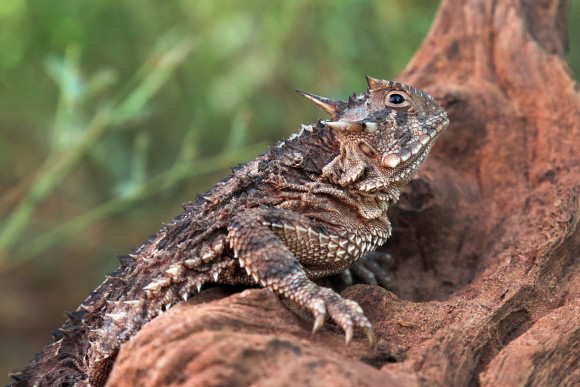 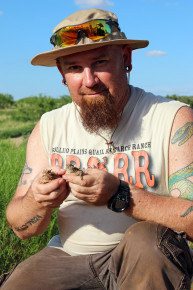 This is Dallas Zoo’s seventh year working on the ranch, studying the life history of this Texas icon. Sadly, their numbers have declined drastically over their natural range. Invasive fire ants, over-collection, habitat destruction, and lack of harvester ants (their main diet), have all contributed to the downfall of our official state reptile.

Which is why our reptile team spends many days on this protected ranch each spring and summer, collecting as much data as we can to shed light on what these lizards need to make a comeback.

Spring can bring some violent weather to the rolling plains of Texas, and this year has been a doozy. My first six evenings out west brought six pretty rough storms, high winds, driving rain and some baseball-sized hail.

Precipitation is crucial to the survival of many species at the study site, including horned lizards. So I can’t complain about the rain. I have to take every opportunity to look for lizards in between the storms. When the sun comes out, so do the lizards.

The resources available to all of the wildlife at the ranch this year are great. I hear quail everywhere, and deer, rabbit, rodents, birds, insects are all abundant. It seems that ground squirrel and rat numbers are climbing quickly. 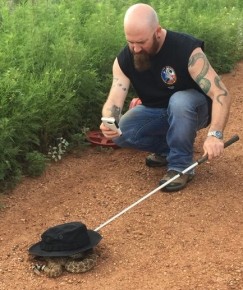 Fortunately, I have seen many healthy, robust rattlesnakes this year, too. Rattlesnakes are crucial to rodent control and the ecosystem – they’re the most efficient way to keep rodent populations in check. They keep rodents from overwhelming native plants, as well as our crops. And most importantly, rattlesnakes protect us from many serious diseases carried by rodents.

While in the field, we also record as much data about the rattlesnake population as we can. About ten years ago, this land was used to hunt rattlesnakes. Rattlesnakes were driven from their dens, and were stored off-site in inhumane conditions, then transported to cruel “rattlesnake roundup” festivals and slaughtered in a misguided effort to clear areas of these keystone predators.

Now that rattlesnakes aren’t harvested on this preserve (thanks to the current owners), we’re using this opportunity to look at how they’re doing since they’ve been left alone.

We process each rattlesnake we catch in the same way we do with the horned lizards, but with more safety measures. They are weighed, measured, and their GPS location’s noted. We record their microchip number if they have one, if not we give them one. (The passive integrated transponder tag we insert on horned lizards and rattlesnakes is the same kind of chip used to help identify lost dogs and cats.)

Then we send them off on their merry way, and get back on our ATVs in search of more reptiles.

As summer comes to an end, we start to see many horned lizard hatchings. It makes me hopeful for this threatened animal’s rebound and, of course, ends the tagging season on a great note.

WATCH this awesome video of our trip out to the ranch last year.