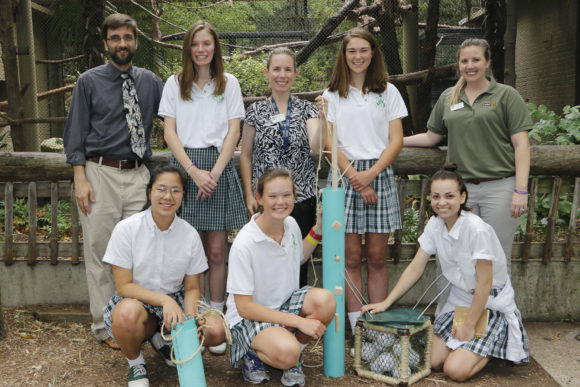 Hockaday students present their enrichment devices at the Zoo

For most high school students, the semester is filled with standard classes like calculus, biology, english, and history – but a group of five Hockaday students can proudly add monkeying around with STEM to their academic repertoire. 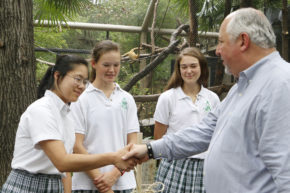 It all began with a unique partnership between the Zoo and the Hockaday School. Several Hockaday students were already involved in our Teen Science Café and Zoo Corps group, so it only seemed natural to find a way to further engage other students, using Zoo related problem solving.

“We value long-term partnerships like this because they can result in a deeper connection with the Zoo’s conservation mission. As the students delve into their projects and learn more about the animals they are helping, they can come away feeling more connected to the animals, which is important since their generation does and will have so many opportunities to make a positive difference for species worldwide,” said Dallas Zoo’s director of Education Marti Copeland.

The Hockaday School had just the person for taking on this wild task. Science teacher Leon de Oliveira began a brand new course for the semester entitled “Community Impact by Design.” The class allowed students to work in small groups while engaging in the design and engineering process in order to solve a problem. This year’s challenge: find a creative way to encourage small primates to use more vertical space in their exhibit. 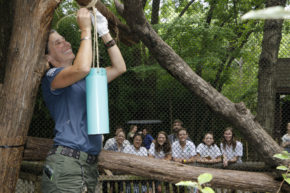 Keeper Audra C. put Wendy’s and Kate’s treat shaker to the test after filling it with food

How exactly does one prompt a primate to move onwards and upwards? Through enrichment, of course! However, Zoo staff left the designing fully up to the students. The class made multiple trips to the Zoo to observe their subjects while working closely with primate keepers and our education team. After multiple models and prototypes made out of various approved materials, the students were able to turn their ideas into actual enrichment items.

“I have just been blown away by their creativity and perseverance throughout the challenge. To see the whole process starting from their initial cardboard designs to the final product was incredible. What a transformation!” Education supervisor Courtney Jonescu said.

Hockaday seniors Wendy Ho and Kate Keough created a “treat shaker” out of PVC pipe. The capsule shaped item, designed to hang from a tree branch, has maze-like layers of plexiglass on the inside. Primates must shake the apparatus to move food through the levels until it falls out a small hole at the bottom in order to be consumed.

Sophomore Meredith Jones approached the task from a different perspective, developing a “treat tree” with branches for food pieces to hang. Primates must pull levers in order to release the tree, allowing it to sprout out of a PVC pipe and reveal more and more treats depending on which lever is activated. 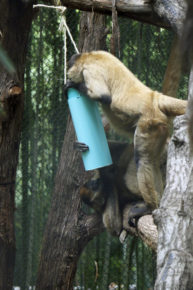 Junior Annie Allen and senior Audrey Black cleverly worked together to craft a “ball box.” The cube-like structure is made of mesh and houses a second cube within it, filled with whiffle balls, which have perfectly sized holes for primates to reach their fingers into and attempt to work food out.

“You had to really think like a monkey and consider everything that they could do, like their strength,” Allen explained.

And think like a monkey they did! Wendy’s and Kate’s treat shaker was even put to the test on May 11 after the students presented their final enrichment deliverables to Zoo staff and interested onlookers. Keepers hung the device from a branch in the spider monkey habitat, warning that the primates might be somewhat shy to approach it – but the troop proved otherwise.

“The device worked exactly like the students hoped it would, and the spider monkeys were immediately interested in it. They looked down the tube through the plexiglass window, just like the girls imagined they would.  Then they manipulated the tube until yummy treats fell out of the flawlessly cut hole at the bottom. It turned out to be perfect and all of us were thrilled to see that,” said Jonescu.

We think the students deserve an A+ for their hard work, creativity, ingenuity – after all, it’s not every day that one receives the monkey seal of approval.