Coordinator of Animal Behavior Science Nancy Scott guest-blogs on ZooHoo! about a study conducted on our elephants’ sleep habits and behaviors.

Sometimes we can’t sleep the night before Christmas or before a big test. Whether it’s something exciting or scary, big events can affect how well we sleep at night.

The same goes for animals, too. When the Dallas Zoo rescued elephants from Swaziland last spring, we really wanted to confirm they felt comfortable enough in their new environment to sleep well at night.

Our first step was to see how many hours our longtime residents, the “Golden Girls,” were sleeping at night, so we could compare the groups. The thing is, I like to sleep as much as the next person, so how were we going to keep track of elephants sleeping while we were sleeping, too?

Technology to the rescue! We used video cameras in the elephant barns to record what the elephants did at night, and then reviewed the footage the next day… while we were awake.

Although elephants can doze standing up – sometimes even while leaning against a rock or using their trunk as a fifth limb for balance – they’re most relaxed when lying on their sides.

“The most surprising thing to me was that elephants lay down to sleep,” said research volunteer Becca Dyer. “I thought that, because of predators, they slept standing.”

For this study, we wanted to know how much time the elephants were lying down and getting the very best sleep.

Our observations of the Golden Girls told us Jenny likes to go to bed around 10-11 p.m., while the other three females are usually asleep by midnight. And just like you may have to get up in the middle of the night to use the bathroom or raid the fridge, the elephants don’t sleep through the night, either. They usually get up three or four times a night, sometimes changing sides, or location.

“When Gypsy finally goes to sleep, Jenny will bug her until she wakes up … and then lay down in her spot! Gypsy doesn’t seem to mind. What a friendship!” research volunteer Jill Donaldson said.

While volunteering as a Base Camp ambassador, Jill has seen the elephants using sand to dust themselves in the Savanna – especially after a good mud wallow – but she didn’t realize they also use the sand piles as a pillow. The keepers often see imprints of the elephants’ skin in the sand piles in the mornings. 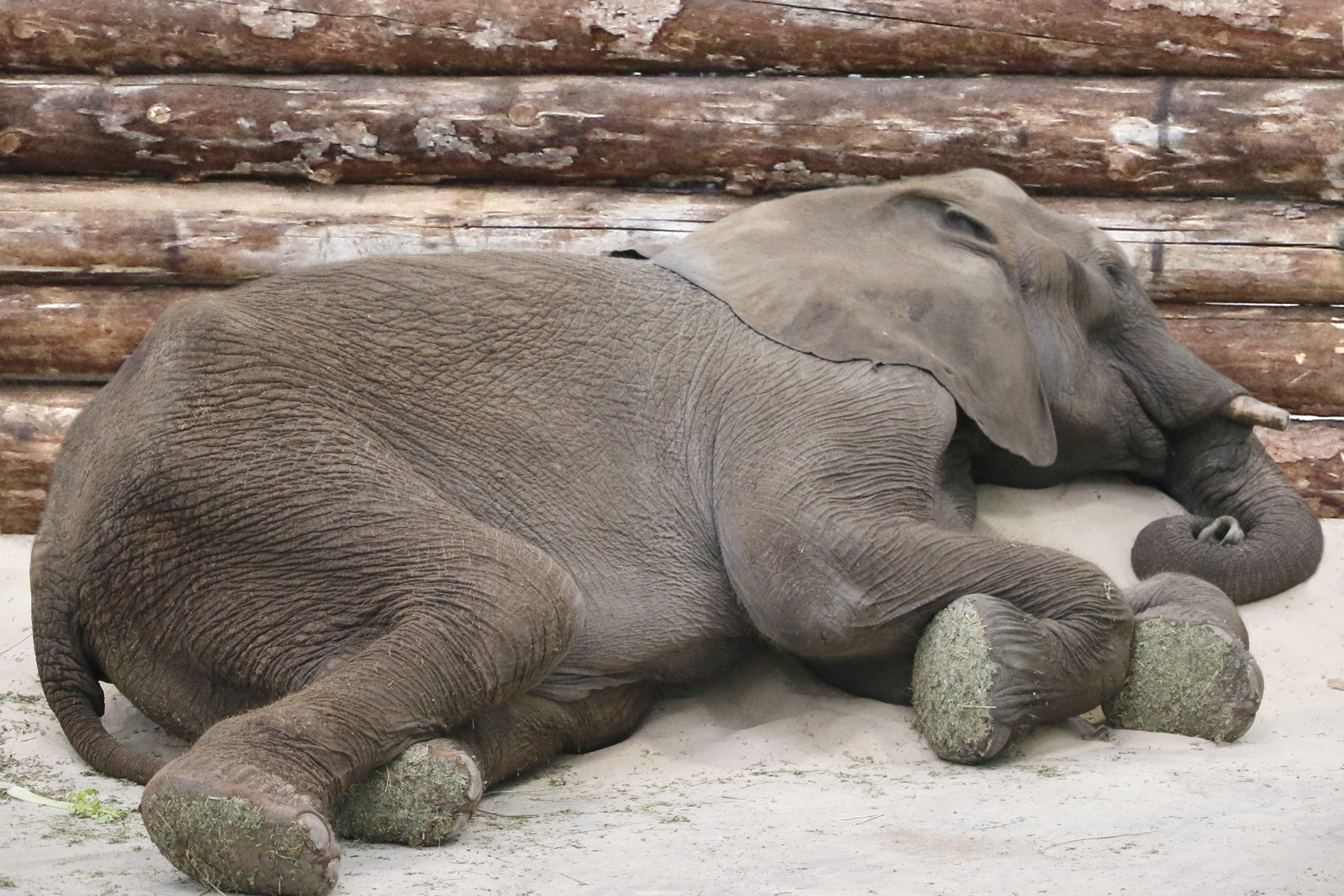 Our elephants tend to sleep on their sides, much like humans do

The elephants rescued from drought-stricken Swaziland seemed very comfortable their very first night in their new home at the Dallas Zoo, according to our observations from just about a year ago. There was plenty of sand for pillows, and they certainly took advantage of it. Feeling relaxed in their new home, the rescued adults slept just as long as our resident Golden Girls – about 3-4 hours per night.

We quickly learned their personalities from the overnight video. Our bull, Tendaji, likes to sprawl out with his legs in front of him and will sometimes be on his side with his eyes still open, trying to eat hay while he’s lying down.

Nolwazi tends to go face-first into the sand when she beds down. Research volunteer Julie Evans (who can also be found in the Gorilla Research Station or Base Camp when she’s not observing sleeping elephants) remembers a favorite moment when “Nolwazi raised her head to check that her daughter, Amahle, was sleeping peacefully, then Nolwazi put her head back down.” A typical youngster, Amahle sleeps longer than the adults, resting around 4-5 hours each night.

Donaldson wasn’t sure if watching sleeping elephants would be interesting when she first signed up to help, “… but no way am I bored. They are all fascinating!” she said.

After calf Ajabu was born last May, we learned a lot about baby elephant sleep patterns, too. He loves to climb all over his mom just as she’s trying to get some much-needed shuteye for herself (sound familiar, parents?).

“If all else fails, he’ll curl up under her chin and sleep a little longer,” said research volunteer and Base Camp ambassador Barbara van Pelt.

Ajabu takes more than a dozen naps each night (for a total of 6-7 hours of rest) when he’s not pestering his mom, playing with Amahle, or practicing his balance skills on a log. While Jill and Barbara are impressed by his perseverance, Rhonda loves watching him for his tightrope skills. You may have seen him practicing in the habitat by climbing rocks.

Our volunteers contributed an average of 20 hours a week over the past 14 months on this important project.

“It’s a great group of people who volunteer for the study, and we enjoy sharing our thoughts about what we see,” said Barbara. When asked why she likes to help with this study, Julie said, “Why? Because research is my passion!”

5 thoughts on “Snoozing in the sand: Studying elephant sleep habits”