The first foal named Kalila, meaning “dearly loved” in Arabic, was born July 9 to 13-year-old mom Liberty. This is dad Abai and Liberty’s third foal together – the pair previously welcomed two babies at their former home, the St. Louis Zoo. 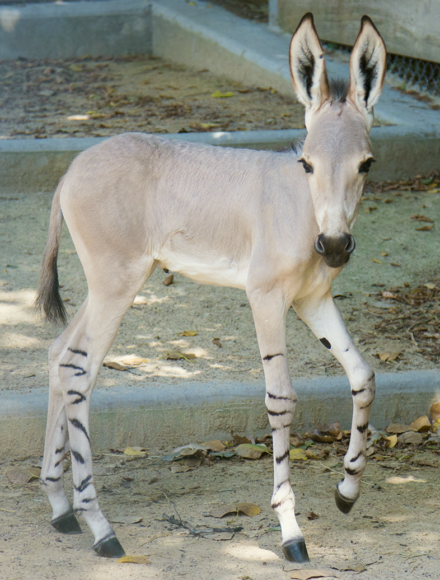 The second foal named Naima, meaning “calm” in Arabic, was born July 19 to dad Abai, and first-time mom Hani, who turns five years old next month. And just like her older half-sister, Naima was standing, walking and nursing within minutes.

“This is a big moment for our hoofstock team. Somali wild asses are critically endangered with less than 600 left in the wild,” mammal curator John Fried said. “Only nine institutions in the U.S. care for this rare species, and to be able to welcome two babies is truly one of the highlights of my career.”

Native to the arid regions of the Horn of Africa – Ethiopia, Somalia and Eritrea – there are many reasons the Somali wild asses’ numbers have dropped drastically in the wild. Locals hunt this species for food and traditional medicine – some believe their fat treats tuberculosis. Somali wild asses also directly compete with livestock for limited land and water sources. Plus, wild asses are crossbreeding with domestic asses, hurting the genetics of this species.

With unique zebra-striped legs, a soft gray upper body, a white belly, and a spikey black-and-gray mane, Somali wild asses are the smallest of the wild equids (horses, asses, and zebras). Standing about four feet at the shoulder and weighing roughly 600 pounds, these animals also have the smallest hooves of any equid, which help them navigate rocky slopes.

The Dallas Zoo is working with the Association of Zoos and Aquariums’ Somali Wild Ass Species Survival Plan (SSP) to increase their numbers in human care and keep the North American gene pool genetically sound. In 2005, father Abai arrived from the Basel Zoo in Switzerland to bring a new bloodline to the U.S. Since then, he’s sired multiple foals. 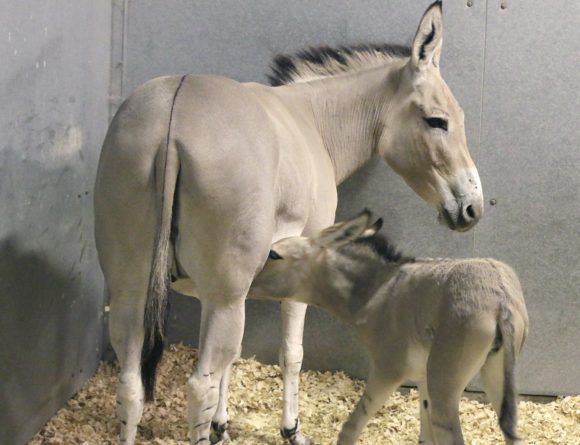 “These little girls have brought so much excitement to our hoofstock barn,” mammal supervisor Christine Rickel said. “Although they were born 10 days apart, they look vastly different. We joke that Liberty has super milk because Kalila’s already a big girl. She was born weighing 65 pounds – 14 pounds heavier than Naima.”

Liberty, Hani and their foals were introduced to each other last week behind-the-scenes, but the protective mothers are hesitant to allow the little ones to play together, who just want to run in circles to their hearts’ content.

The babies will soon venture into the arid habitat off the Wilds of Africa Adventure Safari monorail. And, in time, they’ll meet the gemsbok, addax and ostriches, with whom they’ll eventually share the habitat.

Stay tuned for more updates as these precious girls continue to grow.