Six months with lion cub Bahati & the journey to get here

Guests have fallen in love with our now 6-month-old Bahati Moja, the first lion cub born at the Dallas Zoo in 43 years. Her birth on St. Patrick’s Day this year via a scheduled C-section left nothing to chance. The positive outcome was the result of a well-coordinated and meticulously planned group effort between our animal care, veterinary, and nutrition teams.

The veterinary team knew that Bahati’s mother, Lina, has a narrow pelvic canal and small hips, which had resulted in two stillborn cubs during her previous pregnancy. Once keepers noticed Lina breeding with Kamau, the planning began to try to ensure a healthy pregnancy and birth. The team determined the safest option for mom and baby would be a scheduled C-section. Then the staff planned out 105-110 days, the length of lion gestation, so that full veterinary and carnivore care teams could be on hand for the day of delivery. 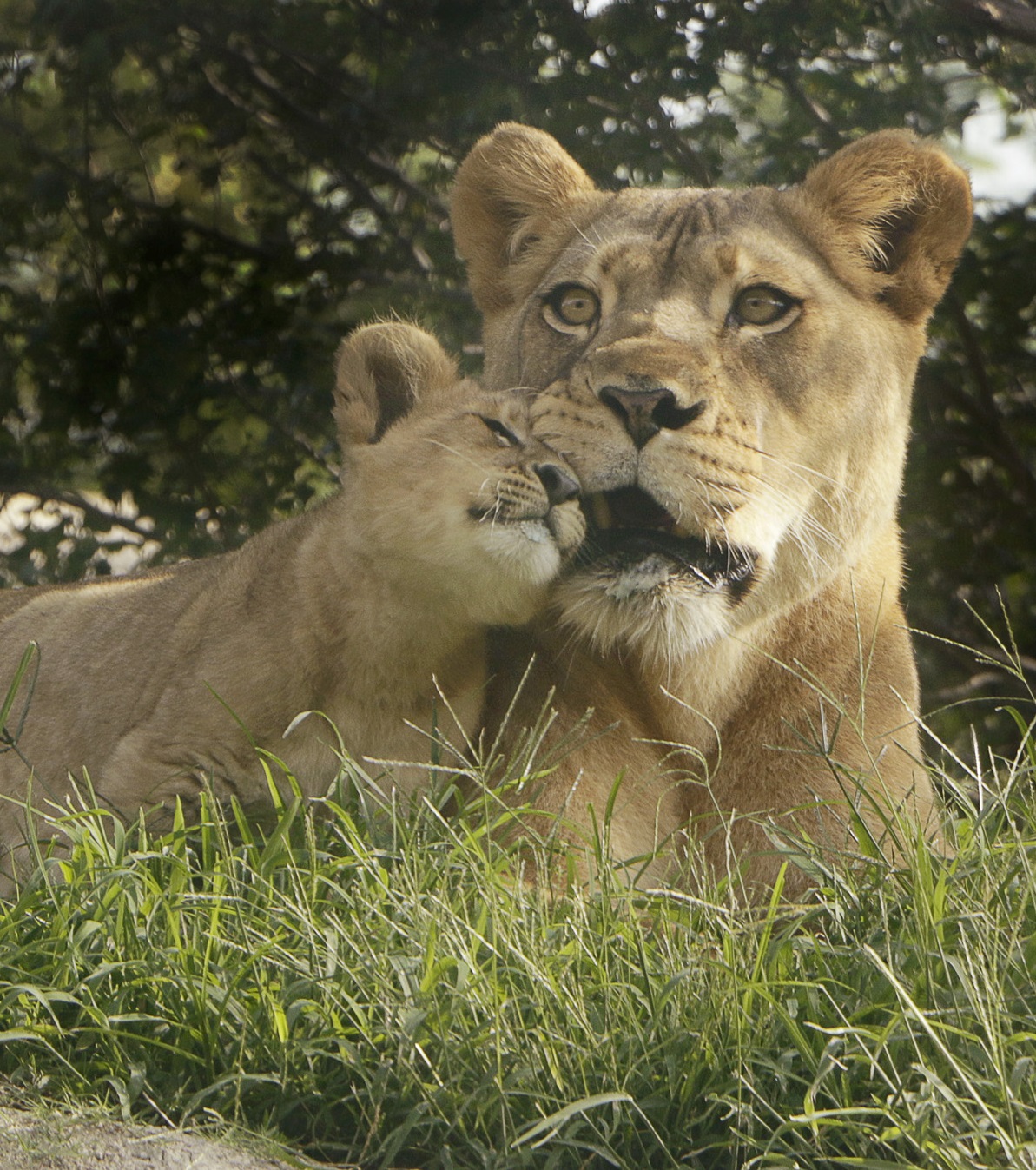 Bahati nuzzles up to mom Lina.

When the big day finally arrived, all the careful planning paid off. The veterinary team performed a by-the-book C-section and ran into no issues during the procedure. Bahati was strong and vocal immediately after birth. Mother and cub returned to the carnivore barn soon after delivery so Lina could wake up from anesthesia, recover from surgery, and meet her cub in familiar surroundings. Keepers bottle-fed Bahati a special formula the first few days until mom fully recovered, but Lina showed excellent maternal instincts and took over care just 30 hours after her operation.

Bahati has been consistently gaining two to three pounds per week, and now weighs 60 pounds. In addition to nursing, the little predator now gets her own diet of bones and ground meat. In the wild, these carnivorous cats are opportunistic feeders and prey on zebra, wildebeest, buffalo, antelope, and other sources of meat.

This smart cub has mastered shifting from her yard to the barn and is working on target training, lying down, and sitting during voluntary training session with keepers. Soon she will advance to presenting her paws for inspection and conducting blood draws on her tail. Guests can watch her progress during training demonstrations at Predator Rock in our Giants of the Savanna habitat. 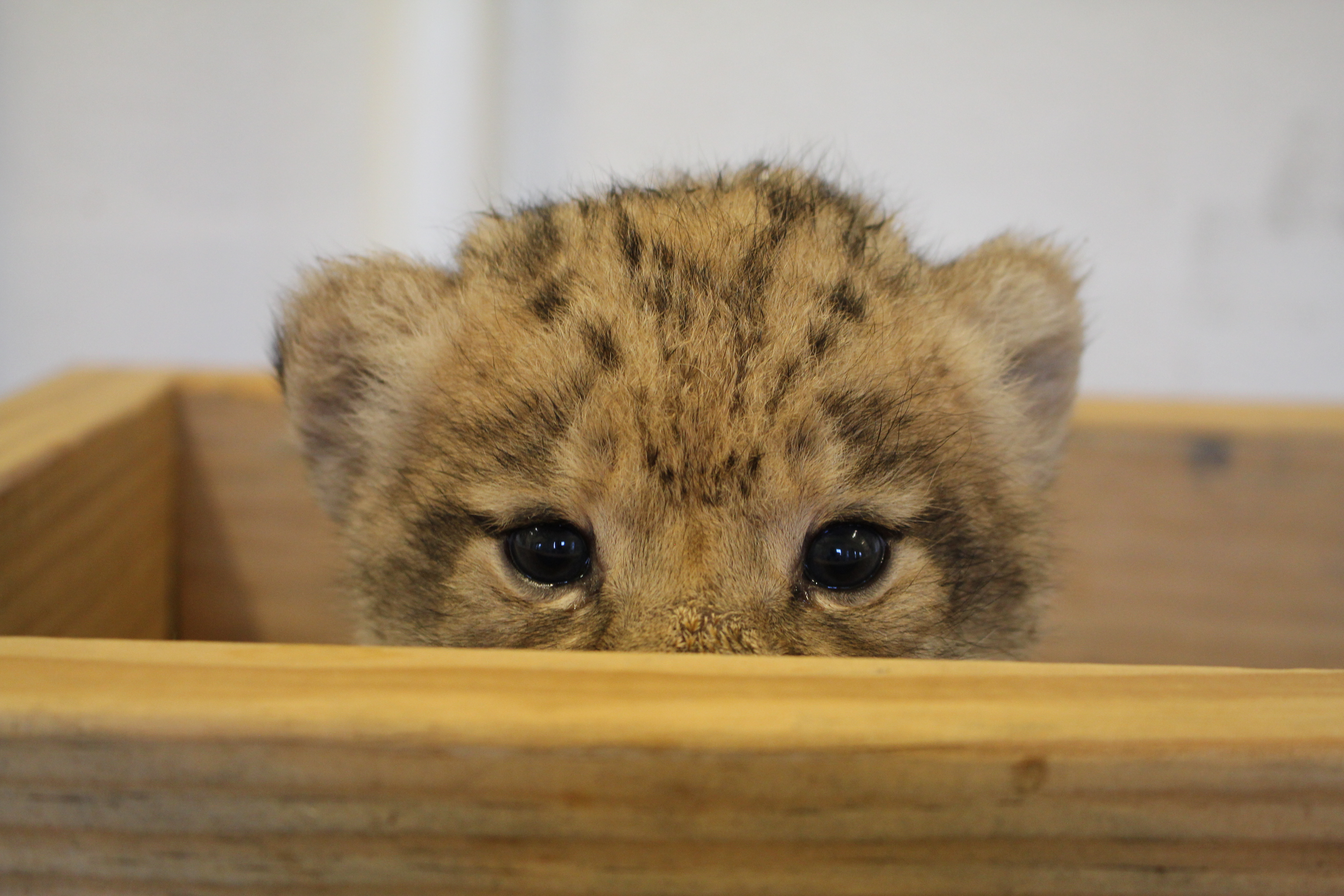 During a weighing session, newborn Bahati sticks her head out of the scale box.

Since lions are the only true social species of big cats, females tend to work together to raise all the cubs in their pride. It’s no surprise, then,  that aunt Jasiri enjoys her wild and playful niece and often helps Lina by babysitting. Even dad, Kamau, is playing a part in rearing the cub. When Bahati practices her stalking on Kamau’s thick mane and tail, dad is loving but stern in his response.

Bahati is putting her climbing skills to good use, exploring the rocks and hills in her habitat and climbing over mom, dad, and aunt Jasiri. In Africa, lions will lounge underneath trees to escape the heat and insects, and you’ll often see the same with our pride here.

You may hear Bahati mew and growl, but it will still take a few more months for her to develop a full roar. As she grows, she’ll lose the spots of a newborn and will develop a full tail tuft. Come to Predator Rock – or the Serengeti Grill windows – to see our new pride and joy for yourself!