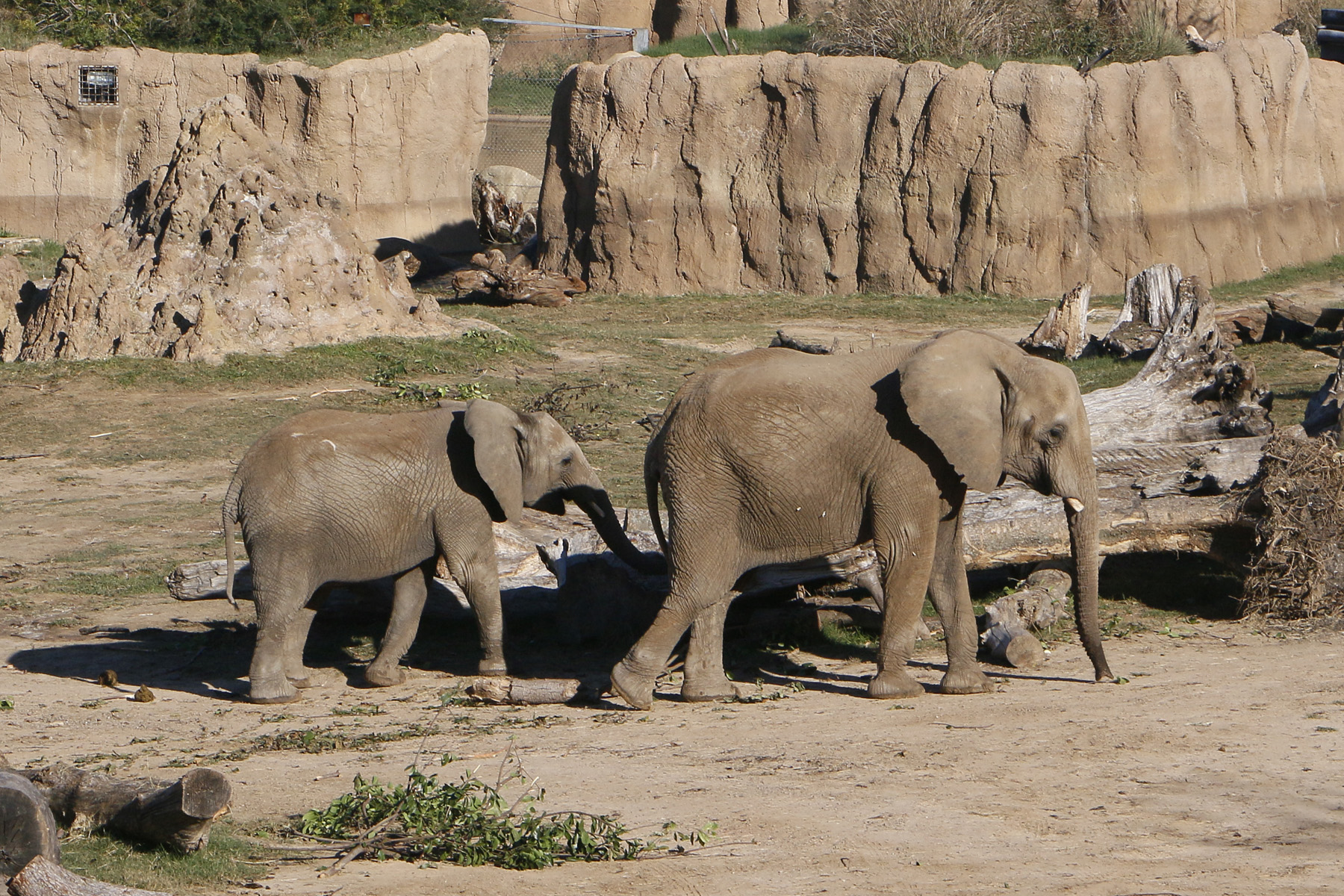 Mother/daughter pair Nolwazi and Amahle moved to their new home at the Fresno Chaffee Zoo in California this week.

A small task force from our animal care team has been hard at work for months preparing to relocate elephants from our herd to a new home. Those months of thoughtful preparation, diligent training, and a 32-hour trip are now over, and we’re happy to report that Nolwazi and Amahle have safely arrived at Fresno Chaffee Zoo in California.

The pair are getting acclimated to the zoo’s expansive, naturalistic mixed-species African Adventure habitat after arriving in Fresno on Tuesday evening, October 16.

The unique situation in Fresno presented an exciting opportunity to move Nolwazi (approx. 24 years old) and her daughter Amahle (approx. 9 years old) to an AZA-accredited zoo that shares our same philosophy of animal welfare and approach to animal care. The Fresno elephant team cares for one bull and one young female, and we hope the move will allow Nolwazi to assume a matriarchal position, leading a herd of her own – a role for which we believe she is well-suited. This also gives Amahle a similar-aged female with whom to socialize and play.

“We have been looking to grow our African elephant herd,” said Amos Morris, Deputy Director/Chief Operating Officer at Fresno Chaffee Zoo. “Having Nolwazi and Amahle join us accomplishes that, and will hopefully create a successful family group that may lead to breeding in the future.”

Fresno Chaffee Zoo’s herd now consists of four elephants, and Dallas Zoo remains home to an eight-elephant herd, including our four “Golden Girls,” and four elephants that were a part of the Swaziland rescue in 2016.

Planning for a massive move

Animal moves are complex, meticulously planned endeavors – particularly when they involve animals as intelligent and social as elephants. This move has been months in the making, and our team has worked closely with staff from Fresno to ensure a successful move and safe introduction to the new home for the elephant pair. Members of Fresno’s elephant team have visited Dallas multiple times over the last few months to work with our staff and to familiarize themselves with Nolwazi and Amahle’s routines and personalities.

During their visits, Fresno’s team observed both elephants were curious about them but did not appear nervous, and the team was able to start working with and have positive experiences with both Nolwazi and Amahle almost immediately. They also noted how critical it was to begin forming relationships with both elephants ahead of the move, which should help ease the transition now that they have arrived at their new home in California.

Dallas Zoo’s elephant team created and followed a comprehensive training plan in the months leading up to the move to ensure Nolwazi and Amahle would be as comfortable as possible with the transport crates that would house them during their trip to Fresno. Both crates were equipped with video cameras so the travel team could monitor the pair throughout the journey.

Four Dallas Zoo team members, along with a curator from Fresno Chaffee Zoo, two veterinarians, and two expert consultants, traveled with Nolwazi and Amahle during the drive from Dallas to Fresno, providing updates every few hours on progress and ensuring the animals’ comfort throughout the trip. By all reports, the trip went off without a hitch.

Dallas Zoo staff members will remain in Fresno for several days to work with the team and the elephants to help ensure a successful transition to their new home, where we are excited to see them continue to thrive!

Nolwazi and Amahle came to Dallas in March 2016, along with bull Tendaji, and females Mlilo and Zola, as part of a multi-zoo rescue project to save elephants from being culled (killed) in drought-stricken Swaziland, Africa. When these elephants arrived, they were underweight and in need of TLC, so our dedicated animal team immediately began administering round-the-clock care. Becoming comfortable with their new home and feasting on a well-maintained diet, the entire Swazi herd soon began to gain weight and bond with keepers.

Just two months later, our Swazi herd of five grew to six with the unexpected arrival of adorable baby Ajabu to mom Mlilo. Over the course of almost a year, Dallas Zoo’s elephant team carefully orchestrated introductions of the Swazi elephants to our “Golden Girls” – Jenny, Gypsy, Congo, and Kamba.

We’ve loved watching Nolwazi and Amahle’s personalities develop and grow over these last two years within our dynamic herd. While we’re sad that Nolwazi and Amahle have left our herd, we know the opportunity for them to be a part of a growing family herd at Fresno Chaffee Zoo will allow them to flourish. That’s what we want for every animal in our care – and that’s why we do what we do every day.

We know you’ll join us as we wish Nolwazi and Amahle well in their new home in Fresno!