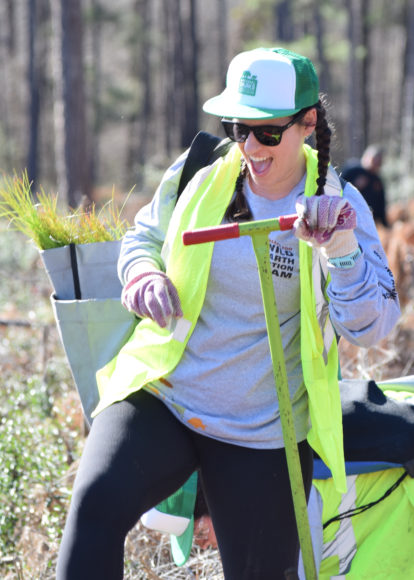 What’s black, white and red all over? No, not a penguin with a sunburn. Try again. It’s the red-cockaded woodpecker! (The red part is actually just a small stripe on its head). Sadly, though, these little guys are nearly extinct.

But our Wild Earth Action Team (WEAT) is ensuring these birds keep pecking away for a long time. The team just wrapped their third annual trip to the Big Thicket National Preserve where they planted longleaf pines to help restore habitat for this endangered bird and other species.

For the red-cockaded woodpeckers to survive, they need to be able to safely nest – and they rely on longleaf pine forests to do that. So we’ve gotten to work, and over the past few years, the Dallas Zoo and a team of volunteers have planted more than 30,000 longleaf pines to reforest 300 acres for habitat. 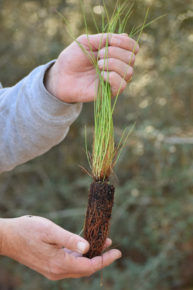 “We’re thankful to all our volunteers, including the Dallas Zoo, who have played a vital role in the reforestation efforts in the Preserve,” said Jason Ginder, Park Ranger at Big Thicket National Preserve. “Re-establishing an ecosystem based on native plant communities is vital to a healthy forest. Longleaf pine trees thrive in the Southeast Texas climate, and make it ideal habitat for the endangered red-cockaded woodpecker.”

We couldn’t make these expeditions happen without our rock star community joining us to protect Texas wildlife.

“Getting the chance to go on this expedition was probably one of the most exciting things I’ve ever been able to do,” said Jon V., Dallas Zoo Conservation Guide. “It felt so amazing to participate in the active conservation process and to help restore the habitat of the endangered woodpecker, so that hopefully one day, it will be taken off the endangered species list.”

We rely on people like you to help us reach our conservation goals. One of our most ambitious goals this year is to remove ten tons of litter pollution from wildlife habitats. Help us reach this by pledging to pick up just ten pieces of litter every Tuesday. It’s that simple! Learn about the Ten on Tuesday campaign here. You can also join us on one of our Wild Earth Action Team expeditions! We head to Corpus Christi March 2-4 to restore habitat for the endangered whooping crane, plus, we’re doing a ton of cool activities. Learn more about the trip!