Posted on December 7, 2016 by Shannon Simmons

“Our volunteers are simply amazing! They bring a wealth of knowledge, skill, and enthusiasm that is unmatched. We could not accomplish what we do here without them. Together, we are building a better world for animals.”

Long before the Dallas Zoo had an organized volunteer program, 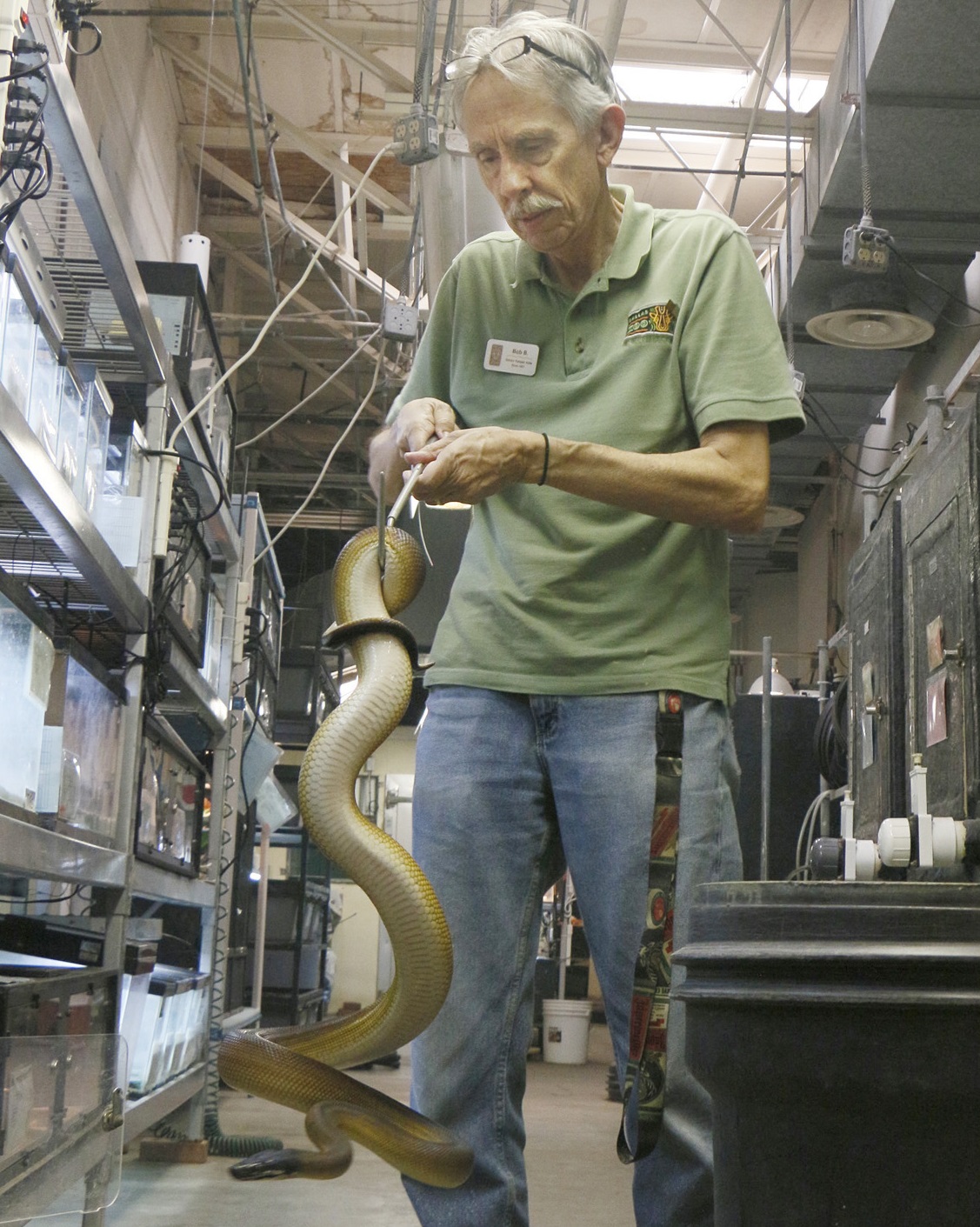 Bob Butsch spent his Saturdays helping take care of various animals in the Herpetarium where our reptiles reside. For free!

As of today, he’s our longest serving Keeper’s Aide volunteer, having volunteered almost every Saturday for nearly 30 years. (Yes, three decades.) If you do the math, half a day for 50 Saturdays out of the year for 29.5 years totals 5,900 hours! That’s 245 days. Can you imagine having that under your “Volunteer” tab on your resume? Wow.

Additionally, he’s been in the Herpetarium longer than anyone, including keepers and curators. Bob began as a volunteer at the Zoo on Memorial Day weekend in 1987. On a trip to the Zoo with his wife and then 2-year-old son, he wondered about putting his master’s degree in biology to work. He called the Zoo’s Education Department, who told him they had no openings for volunteer docents (who answer guests’ questions). They directed him to the reptile department, who took him in.

In 1987, he started out answering guests’ questions as a docent. After his first few months, a reptile keeper took him behind the scenes to give him an impromptu “evaluation.” This simply involved seeing how well he could handle the animals. After he handled a snake with no fear, he became a Keeper’s Aide Volunteer. 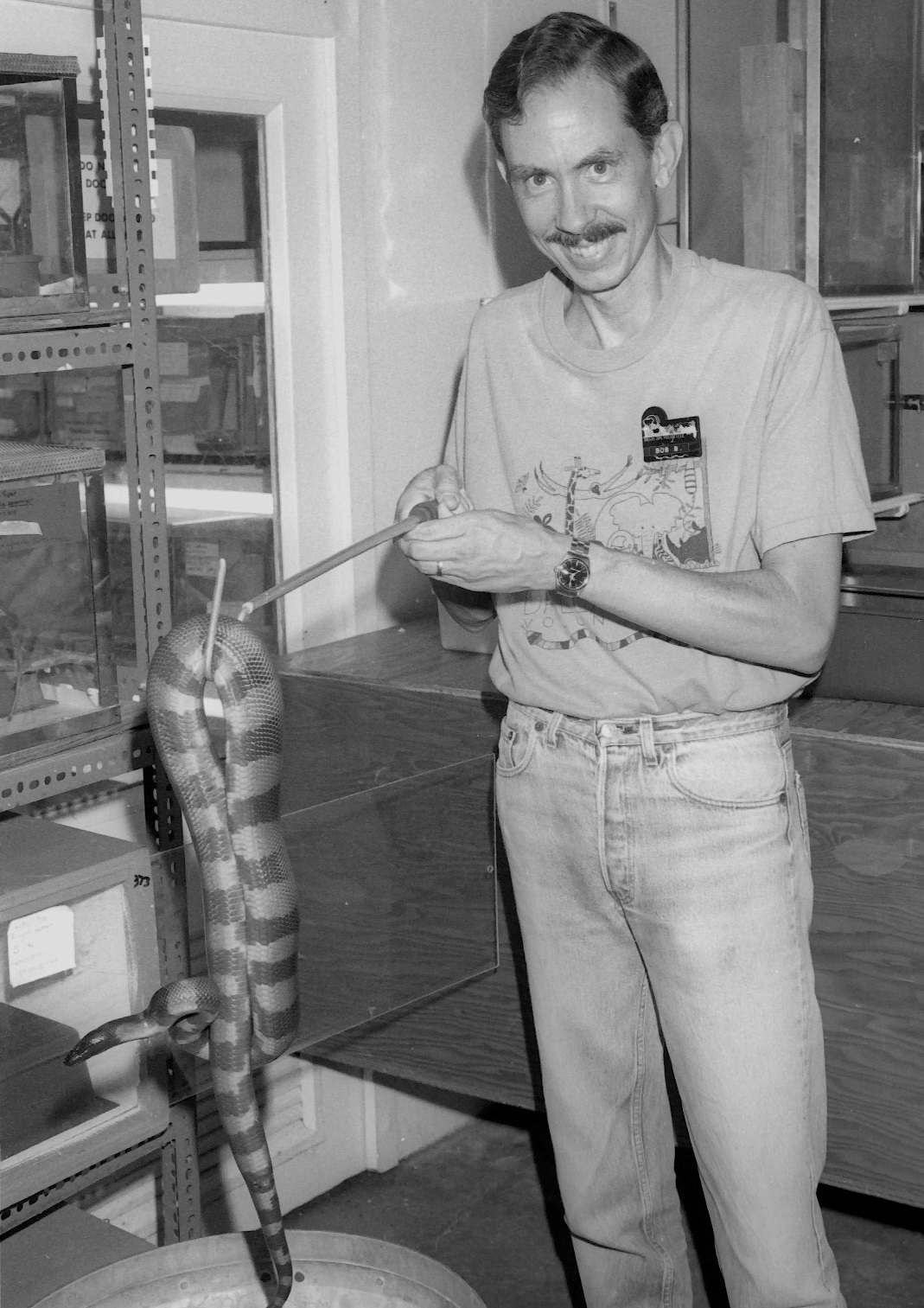 In July 1991, Bob Butsch was recognized at Dallas Zoo’s volunteer of the month.

Ever since, he’s worked with various animals in the Herpetarium, including amphibians and reptiles of all kinds. He’s done every job available to volunteers for this department. While he has helped in several different ways, he still must follow the rules specific to volunteers, despite his long career of volunteering.

“As a volunteer, I’m only allowed to do certain jobs,” he said. “In the reptile department, it is very important to follow the rules, because of the dangers that are present with venomous creatures.”

Yet he’s been around on Saturdays for so long that nobody has to watch over his shoulder as he goes about his work. “It’s really flattering when I come in,” he said. “They hardly bat an eye.” That’s the ultimate sign of trust that he’ll do the job right.

He’s seen many changes at the Zoo over the years, like the fact that the Herpetarium used to be an aviary, with birds and reptiles coexisting in the same building. He’s also lived through the replacement of the entire AC unit, taking care of animals out in the lobby so they were out of the way for the workers. And construction, lots of construction, as the Zoo remodeled and improved exhibits.

So why has he continued to volunteer 50 Saturdays out of the year for 29 years? The answer is simple: “The work I do is therapeutic for me, and it’s wonderful to come work in an environment full of happy friendly people who really love what they do.”

As for us at the Zoo, we love having such a dedicated and happy volunteer helping us build a better world for animals.

For information on how you can volunteer at the Zoo, check out our Volunteer page.