A Swingin’ Success for Chimp Conservation 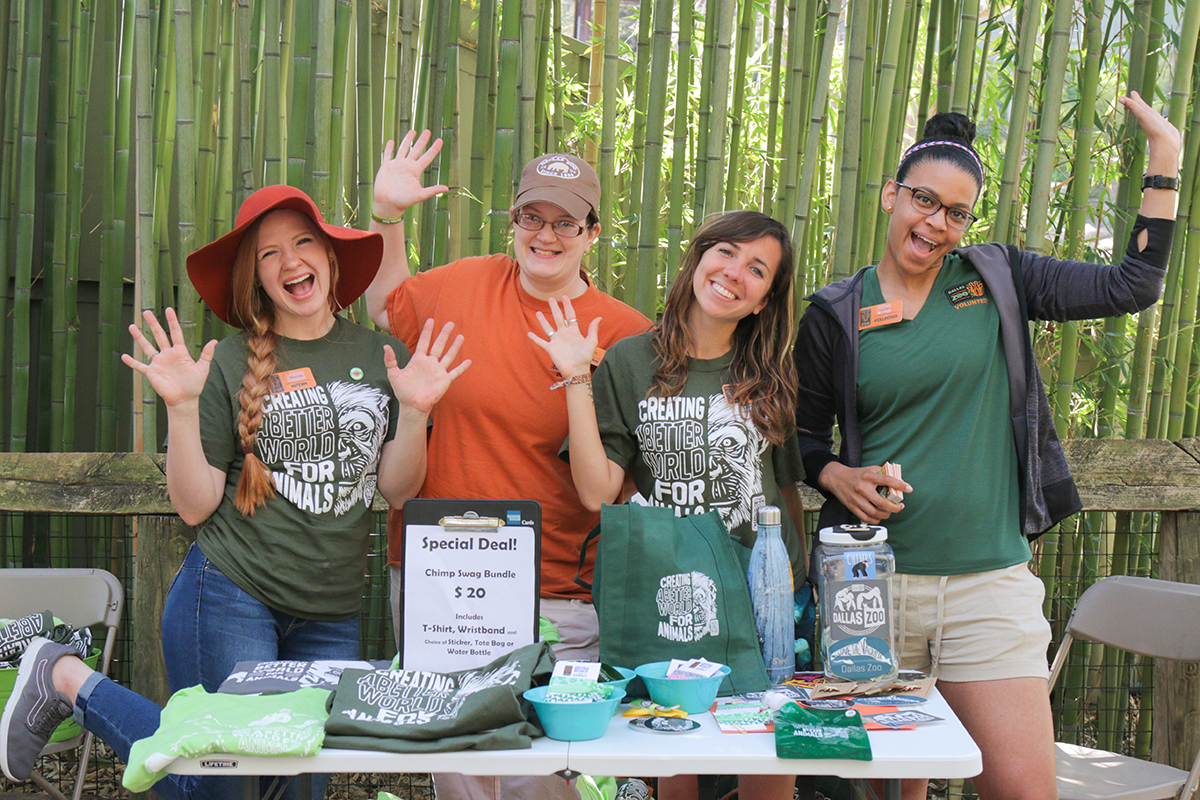 As we wrap-up our “Swing Break” Saving Chimps Week, we can’t believe what an extraordinary, record-setting time it was. Our community’s passion for wildlife conservation is truly amazing. We had an awesome week with beautiful weather and a Zoo full of people, hitting a spring break record of 103,000 guests visiting us in nine days!

Volunteers and interns started the month with ambitious plans for chimp conservation. Our goal was to raise $14,000 for the Jane Goodall Institute, collect 3,000 personal pledges for conservation action, and receive 300 recycled mobile phones. We set up booths in the Zoo and at various off-site events to help reach these goals. 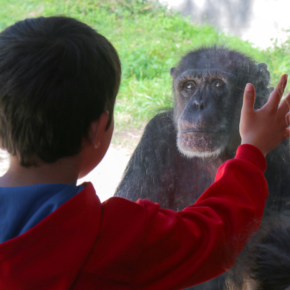 A little boy gets up close and personal with chimp Missy.

After spreading awareness about the importance of recycling cell phones and paper products, 223 phones were donated—just shy of our initial target. However, we surpassed our pledge goal by getting 3,980 total personal pledges for pro-environmental behavior that will benefit chimps and other forest-dwelling animals.

Finally, after selling custom-made chimp conservation T-shirts, wristbands, art pieces, and various other items, it gives me great pleasure to announce that we hit our financial goal of $14,000 to care for two orphaned chimps rescued from the bushmeat and illegal wildlife trade! This money ensures that the two chimps will be well-taken care of for at least one year in a Jane Goodall Institute sanctuary in South Africa.

We could not have done it without everyone’s continued support. Thank you to all of our guests, staff, and off-site friends (Deep Ellum Brewing Company, Kendra Scott West Village, Summit Dallas, Starbucks Cedar Hill, and Lilly Pulitzer)! Our collective commitment to conservation shows how much we can accomplish when we all work together for the greater good of our beloved animals.

Saving chimps: Help protect one of our closest relatives 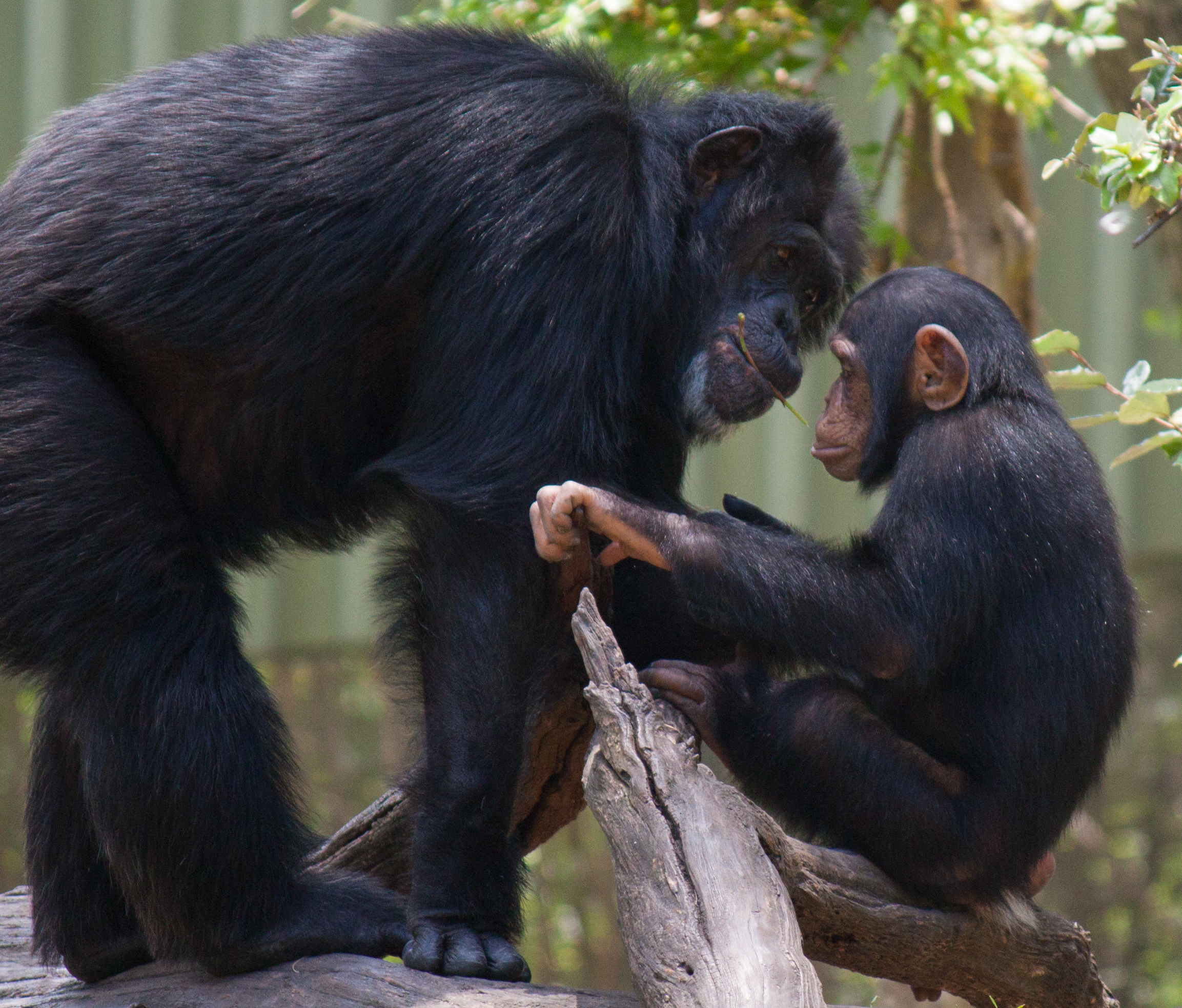 “When you meet chimps, you meet individual personalities. When a baby chimp looks at you, it’s just like a human baby. We have a responsibility for them.” ~ Jane Goodall

Chimpanzees are more closely related to humans than we may think. We share 98% of our DNA with chimpanzees and quite a few personality traits.

In 1962, virtually nothing was known about chimps in the wild. Jane Goodall changed all that. She dedicated her life to researching and observing chimps by sharing a special bond with them — she says, “One touch started a revolution.” Goodall is the reason we know so much about chimps and the personalities they possess. They share our emotions of pleasure, joy, and sadness.

Chimpanzees are very social animals and thrive in communities of about 15-20 consisting of both genders. However, they tend to feed, travel and sleep in a smaller community consisting of six or fewer. One may say that this is related to humans due to our nature of establishing close knit groups of friends and/or family we surround ourselves with on a regular basis.

Chimps are also related to us in their ability to communicate through complex systems of vocalizations, gestures, body postures and facial expressions. Grooming is an important example of their social nature. They participate in grooming for two main purposes: cleaning and establishing bonds between family and friends. It’s a critical action that helps them maintain friendships and comfort each other after a hard time or disagreement. 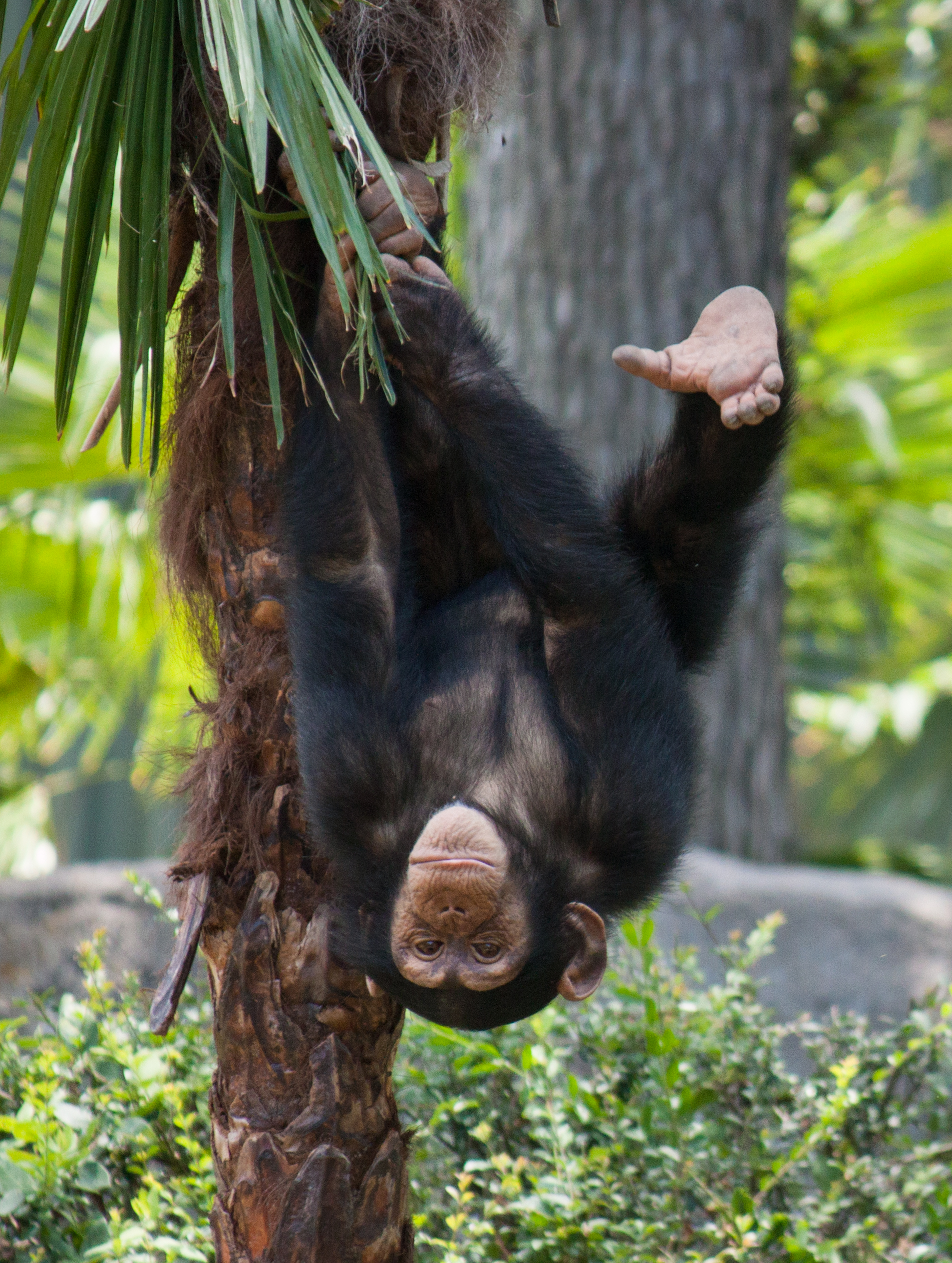 Mshindi hangs from a tree branch in the Kimberly-Clark Chimpanzee Forest. (Photo by Jackie Smith)

The use of tools was first observed by Goodall when she witnessed a chimp use the stem of a branch to collect termites for food. After this groundbreaking discovery, more evidence has been found all throughout Africa. Chimpanzees use rocks as hammers; anvils to open nuts; leaves as napkins or sponges; sticks to open beehives for honey and create spears to kill small mammals.

Chimps are actually great apes and not monkeys. An easy way to distinguish between the two is to look for a tail. Monkeys have tails, while apes (gorillas, orangutans, bonobos, chimpanzees, and humans) do not.

Chimpanzees are omnivores. Their diet consists mostly of fruit and leaves. However, they also tend to eat insects, bark, eggs, nuts and even smaller monkeys or other animals for meat.

Chimps are highly intelligent when it comes to foraging for food. They are capable of remembering where food is located and when a particular fruit is ripe. They will also coordinate their efforts and share the meat amongst the group. It has also been observed that some chimpanzees may consume certain plants for medicinal purposes, like soothing an upset stomach or getting rid of intestinal parasites.

Habitat Destruction, hunting and disease are some of the primary threats to chimpanzees. Ultimately the major risk to chimpanzees and their habitats is human encroachment.

Thanks to Dr. Jane Goodall and her research, The Jane Goodall Institute (JGI) was established to spread the conservation message by raising public awareness, advocating and promoting healthy habitats and sustainable livelihoods. JGI works to protect chimps and other great apes against disease transmission, illegal hunting and poaching, as well as human-wildlife conflict. JGI also uses the triangle approach, which relies on the cooperation between law enforcement, environmental education programs and sanctuaries. (Educate. Protect. Rescue) 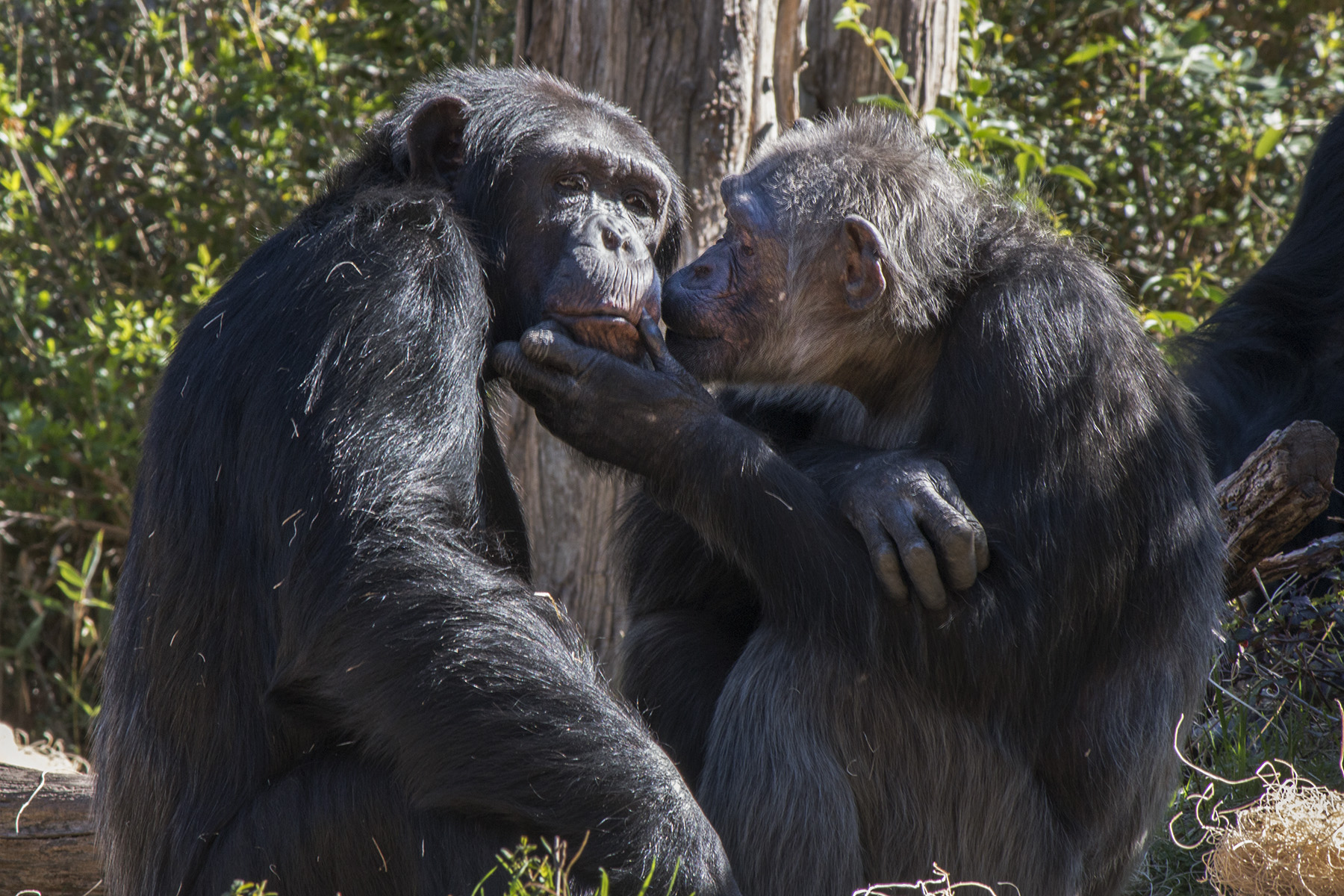 Jane Goodall Institute’s Tchimpounga sanctuary has taken in hundreds of rescued, confiscated chimps since it was founded and provides them with lifetime care. During our Swing Break event, the Dallas Zoo is partnering with The Jane Goodall Institute to raise much-needed funds to feed and care for two rescued chimps.

How YOU can help

Educating those around you about environmental issues and promoting conservation are simple yet effective actions you can take, too. Goodall strongly believes that it is our responsibility as humans to speak up for those who cannot speak for themselves.

A group of Dallas Zoo interns, including myself, have organized a jammed-packed week full of fun events and conservation engagement. We hope you join us at the Dallas Zoo during SWING BREAK through March 18 to help us create a better world for animals.

We’ve set ambitious goals for chimp conservation and we need your help to reach them:

Please support our efforts of raising funds for chimpanzees and the Jane Goodall Institute, so we can continue making a positive impact for the lives of great apes!