Halloween creepy-crawlers not so creepy

Admit it, there are a few creatures that make your skin crawl, or maybe make you squeal, jump on top of a table, or run like the wind. In honor of the spookiest time of year, we’ve compiled a list of the scariest creatures at the Dallas Zoo. But we’re not trying to intensify your phobias — zookeeper Tim Brys tells why our top five “scariest” animals are simply misunderstood.

1. Texas brown tarantula: They freak out arachnophobes, but they’re usually fairly docile, often kept as pets. They’re more likely to flick itchy hairs from their bodies to keep you away than to attack you. Their bite is like a bee sting, but they’ll warn you first by rearing up with their front legs raised. They’re a great pest control for many insects found around your home.

2. Snakes: Let’s start off with this: snakes are shiny, not slimy! And they’re not out to bite you, even the venomous ones. In fact, they’d rather not bite, because it risks damaging their teeth and wastes venom they need to catch food. Snakes would rather just crawl away and hide somewhere, so let them be.

3. Rats: Rodents have instilled fear in humans since the time of plagues. Like any animal, they can spread disease when populations are too high… which is why we have natural controls for them, such as snakes! (See how that works?) If you take a closer look at rats, though, they’re highly intelligent. They can be trained like a household pet and bond well with humans. Plus, they’re furry – and who doesn’t like cute and fuzzy?

4. Madagascar hissing cockroaches: It’s hard for me to look at these insects as scary. I got one as a Christmas present when they were first available in pet stores. They do hiss, but that sound is actually from air being squeezed through holes (spiracles) on the sides of their bodies. They do this when touched, because they don’t know if it’s a predator. They’re nature’s recyclers – they break down organic material, which gives plants access to previously trapped nutrients. Their feet may be a little prickly, but they’re harmless.

5. American alligator: These scaly guys aren’t normally aggressive, but they can become that way when people feed them. If a bite occurs, it usually happens when a person is doing something foolish, in an area that maybe they shouldn’t be (like swimming where alligators have been fed by people), or if there isn’t enough food to go around (often because of overpopulation and habitat loss). They’re incredible creatures that can survive over a year without eating and have some of the strongest stomach acids known to animals.

So put aside your fears and come see for yourself during Halloween Nights why these creepy crawlers aren’t so creepy. Meet the dedicated zookeepers who care for them during this naturally spooky – but not too scary! – event in ZooNorth. For four evenings Oct. 23-26, our gates will creak open from 5-8 p.m. Costumed kiddos can trick-or-treat at 16 themed treat stations, meet Zoo Hilda the friendly witch and other costumed characters, catch an animal show and stage shows by Monster Mash and Peter and the Wolf, and more. Tickets are $10 per person (children 2 and under free). More info: bit.ly/HWN14DZ

With bikini season in full swing, our four resident sheep have shed a few pounds – 8 pounds of wool, to be exact.

Mary, Matha, Alice, and Herbert look a little lighter than usual in the Lacerte Family Children’s Zoo farmyard. To keep them cool and comfortable during warmer months and to prevent their hair from covering their eyes, they are carefully sheared twice a year. Summer temperatures have been known to get as high as 110 degrees in Dallas, and that’s too warm if you’re wearing a wool coat.

But it’s not as easy as getting a haircut. Each sheep was bathed with a special lanolin shampoo a day before so its thick wool could dry completely before shearing. With the help of our Junior Zookeepers, all of the dirt, pine shavings, and hay that had hibernated into their wool was removed. The next day, one by one, the sheep were brought into the barn for a gentle trimming with electric clippers. Unlike commercial farms, where shearing is done quickly, our staff takes their time to ensure that it’s a good experience for the animals.

Ours also don’t have as much wool as other species of sheep, because they’re one of the smallest breeds, often called miniatures. Known as Babydoll Southdown sheep, they’re one of the oldest English breeds, originating in the South Down hills of Sussex County, England. And they produce some of the best wool — their fleece is so fine, it’s put into the class of cashmere.

Of course, we never want to see anything go to waste. “We give the wool to other animals in the Zoo as part of enrichment,” zookeeper Sarah Brys said. “They can smell it, play with it, just get a sense of another animal’s coat.”

It’s been eight months since the Rowland family won a one-year Zoo membership, and they can’t stop visiting. 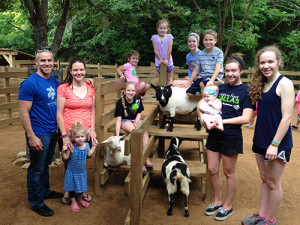 In our first Instagram photo contest last December, we asked guests to tag us with a holiday photo shot at the Zoo. We couldn’t help but choose this family of 11 as the winner after they gathered around our iconic bronze giraffe statue, then creatively added a winter scarf around her neck to make their photo picture-perfect.

The family membership couldn’t have gone to a more appreciative family. Matthew and Jane Rowland homeschool their nine kids, ranging in age from 10 months to 15 years. It’s a special day when they can take their children out to our interactive classroom.

“Several of our children have participated in the Junior Zookeeper program,” Jane Rowland said. “They’ve learned so much about science and taking care of farm animals. It is so awesome that we can make learning fun and an adventure whenever we come to the Zoo.”

A typical day at the Zoo for the Rowland family starts with rides on the carousel, followed by 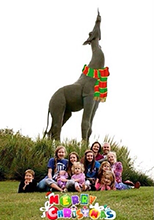 a stop at their favorite exhibit, the Giants of the Savanna.
They like to finish the day by cooling off at the Lacerte Family Children’s Zoo. “The little ones especially love dipping their feet in the pond,” Jane said.

Our #ZooHoliday contest was the first Instagram contest the Rowlands have ever entered. And they’re loyal Dallas Zoo guests, having had a membership for the past 12 years. We appreciate that the Rowlands are active members, and that they help spread the word about the great things we’re doing.

And this spring, we had nearly 250 guests enter our #DallasZooStatues Instagram contest, tagging their favorite photos posing with our bronze animal statues found across the zoo. Congratulations to Teresa Miranda for her winning photo!

Watch our Instagram feed at @dallaszoo for more contests, and you may win something cool, too.