Bobby Brett trains Ginger, one of two capybaras new to the SOAR, A Festival of Flight show. Dallas Zoo/Chelsea Stover

R.O.U.S.’s (rodents of unusual size) are no longer a fictional character in the beloved film “The Princess Bride.” They’re real, and sharing their amazing natural adaptations with Dallas Zoo guests in the SOAR: A Festival of Flight show.

Fred and Ginger are capybaras, new stars who captivate and engage the audience — even those who claim to be afraid of rodents such as rats and mice.

Capybaras are the world’s largest rodent, an average of 140 to 160 pounds when full grown. Named after the great performers Fred Astaire and Ginger Rogers, Fred and Ginger are a brother-sister pair who were born at the Cleveland Zoo in 2013.

Now comes the fun part: giving you an inside view of how these incredible rodents are trained.

As primarily a bird trainer for the past 13 years, I was a little apprehensive. (OK, I was quaking in my rubber boots.) However, you just don’t pass up the chance to share the stage with the Godzillas of the rodent world. Also, the fact that they’re aquatic made the challenge that much more complicated and appealing.

We started with having Fred and Ginger walk onto stage and onto two stumps, where they were given their favorite treats of cut-up corn, sweet potato, apple, kale, romaine lettuce, and collard greens.

This was fairly simple and progressed quickly.

The second part was a little more challenging than we expected: getting the capybara to voluntarily enter the water and swim. Yep, we were a little surprised that getting an aquatic animal into the water turned out to be difficult, but there

it is. We would try to lead them to the water, expecting them to jump in at their first opportunity. But they actually avoided the water! So how do you get a 50-pound animal to walk into water?

Our plan involved a capybara, the “river” on our stage, a section of plastic shelving we screwed together to make a makeshift platform, lots of treats, and a pair of swim trunks. And did I forget to mention that we started this training in January? Bring on the fun!

We coaxed the capybara into the water in the shallow area in front of the waterfall with the help of the corn and sweet potatoes. Once they were comfy with that, we introduced them to the shelf platform. 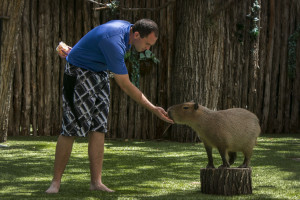 This is where the swim trunks came into play. By standing in the water with the platform between us and the animal, the capybara were more willing to take the plunge. Fred and Ginger showed behavior that indicated they were getting more confident: entering the water faster after chewing, hair on the back of their neck lying flat, walking more easily and confidently, vocalizing their chittering/chirpy call more frequently.

So we began moving the platform further from the edge of the shallow end and into deeper water. This way, Fred and Ginger had to start swimming to get from the “beach” (as we began to call it) to the platform. Over time, we were able to make the swim to the platform longer and longer, until they were swimming the entire length of the river.

We also discovered that the water temperature was too low for Fred and Ginger. We’ve since installed a water heater to make them more comfortable and cause them to be willing to participate in programs for more months of the year. This decision also benefitted our black-footed penguins, Mortimer and Turnip, who also prefer warmer water that’s more similar to what they would find in their native habitat in Africa.

Fred and Ginger are currently in the SOAR: A Festival of Flight shows, so catch one on your next visit.