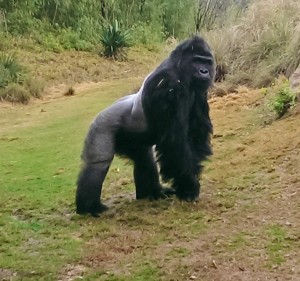 It’s been a year since we said farewell to our beloved Western lowland gorilla Patrick. You helped us send off the 24-year-old silverback with presents, cupcakes, cards, and a whole lot of love. Patrick now calls the Riverbanks Zoo and Garden in Columbia, S.C., home.

Patrick was hand-raised by keepers at the Bronx Zoo due to maternal neglect. But he grew to prefer his own company more than socializing with other gorillas. After years of trying to socialize him with his own kind, it became clear he prefers to live a solitary life. The move to Riverbanks Zoo gave him the opportunity to fully thrive by himself, but in close proximity to other gorillas.

Riverbanks Zoo’s curator of mammals, John Davis, says Patrick fits in perfectly at his new home. Just as he was a visitor favorite for 18 years at the Dallas Zoo, Patrick has continued to have special interactions with Riverbanks

zookeepers and guests. “Patrick is a real crowd-pleaser,” Davis said. “Some people call just to make sure he’s out before they come.”

However, saying goodbye to Patrick wasn’t only hard for our team, but also our guests. Seven-year-old Zoé Neff feels a special connection with Patrick, and recently traveled across the country with her Grandmother to visit him.

“She cried for two days after Patrick left. She’s known him since she was 7 weeks old,” said her mother, April Neff. “We used put her up to the glass and he would follow her all around. It was love at first sight.”

And it was that interaction Zoé knew they’d have again. With her hands pressed hands against the glass, she peered into Patrick’s new home and waited for her friend to notice her. “When she finally got his attention, he ran to the glass to say hello,” Neff said. “Zoé swears Patrick remembers her.”

Davis says the other gorillas ignore the public for the most part, but Patrick loves being with guests.

Patrick joins three other male gorillas. Although he is never physically with them, he can vocalize with them, smell them and have visual contact through a mesh barrier. “Patrick is the only gorilla who’s allowed access to both the outdoor habitat at night and the indoor quarters,” Davis said. “He has more choices, but he likes to hang near the other gorillas and see them.” 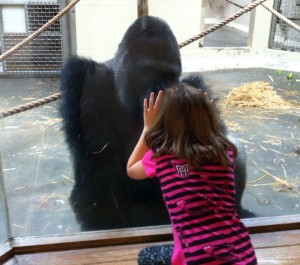 He’s also caught the eyes of his keepers, who’ve learned just how smart he is. “The keepers think very highly of him. He responds nicely with training and uses tools remarkably well,” Davis explained. “He’s great at using a stick to retrieve things outside of his exhibit during enrichment activities.”

We couldn’t be more proud of Patrick for embracing his new home and giving visitors a reason to want to learn more about his species. If you’re ever in South Carolina, stop by the Riverbanks Zoo.

The Dallas Zoo works with the Gorilla Species Survival Plan to place and breed endangered animals in accredited zoos across the nation. Western lowland gorillas inhabit the thick rainforests and swamps of Africa. Due to poaching, habitat loss and disease, their numbers in the wild have fallen by more than 60 percent in the past 20 years.