Here on a Species Survival Plan (SSP) breeding recommendation by the Association of Zoos and Aquariums, MJ has been paired with Dallas Zoo’s popular 2-year-old female tamandua, Chispa.

Born Jan. 12, 2014, MJ is the first southern tamandua born in the New York metropolitan region. Weighing only 14 ounces at birth, MJ is now 20 pounds — almost twice the size of his new companion.

“Only six tamanduas were born in U.S. zoos last year,” said Harrison Edell, Dallas Zoo’s senior director of living collections and coordinator for the Association of Zoos & Aquariums’s Southern Tamandua Species Survival Plan. “Tamandua births in human care are rare because this species can be particularly challenging to work with. They require very specialized care, including a specific diet that can be difficult to duplicate.”

“Hundreds of tamanduas have died in the past decade, stolen from their habitats and imported to the U.S. as pets,” said Harrison. “Zoo experts across the U.S. are working together to raise awareness of the plight of pet tamanduas. We’re distributing educational posters in the tamanduas’ home range, encouraging residents to protect these animals, rather than giving them to exporters.”

Much smaller than their relative the giant anteater, southern tamanduas’ unique look works to their advantage.

Found living in a variety of habitats, from rainforests to savannas, tamanduas spend half their time in treetops. They have tapered heads with a long nose, small eyes, and protruding ears.

They also have enormous front claws, helping them climb, dig for food and defend themselves. In the wild, they can eat up to 9,000 ants a day. Tamanduas have no teeth to chew their food; instead, their powerful stomachs grind and break down swallowed food. At the Dallas Zoo, MJ and Chispa are fed a special high-protein, high-fiber insectivore mixture with avocado and oranges.

As part of the Dallas Zoo’s Animal Adventures outreach program, MJ and Chispa are important ambassadors for their species. The pair will travel to schools, hospitals and events in north Texas, helping educate the public about habitat loss and conservation. They also make appearances on the Wild Encounters stage in the Wilds of Africa.

In the zoo’s Backstage Safari program, guests have personal experiences with animals like MJ and Chispa. A favorite encounter involves the tamanduas licking honey off of guests’ fingers with their 16-inch tongues. The 90-minute, behind-the-scenes program kicks off again Feb. 28. 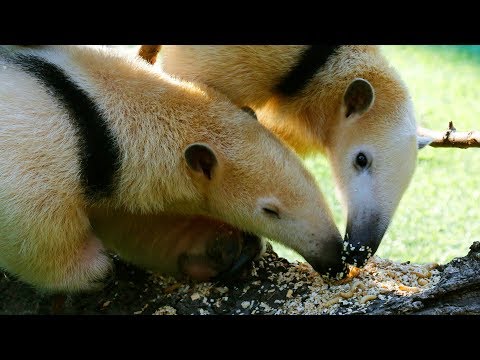