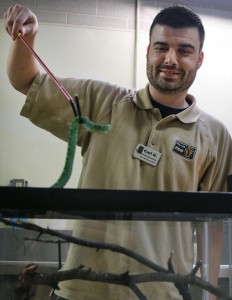 Legend has it that Ireland has no native snakes because St. Patrick banished them as symbols of evil in the fifth century. While science may say otherwise, the bottom line is, there are no wild snakes in Ireland.

So for Dallas Zoo’s Irish reptile keeper, Carl Hollowed, growing up in the Emerald Isle meant he could only learn about these slithery creatures through books and TV. (He’s also believed to be the only Irish reptile keeper in an Association of Zoos and Aquariums facility.)

With no professional experience working with reptiles, it was Hollowed’s passion and persistence that landed him a job as a keeper in one of the best herpetariums in the U.S.

“We were taught nothing about snakes or even reptiles in school,” Hollowed explained. “People say St. Patrick rid Ireland of all the snakes because they were non-believers. The legend symbolizes Patrick driving paganism from Ireland by converting people to Christianity. So if I wanted to learn about snakes, I had to watch National Geographic.”

As Hollowed’s love for herpetology grew, he resorted to discovering what he could in his back yard.

“Me da got me into animals. I was so interested in snakes and crocodiles, he’s the reason why I love them,” Hollowed said with conviction. “I vividly remember catching a frog in the garden and keeping it in a box.”

He didn’t see a snake in the wild until he was 21. A soccer scholarship to Nova Southeastern University in Fort Lauderdale, Fla., brought Hollowed to the U.S., and instantly he was like a boy back in Ireland looking for something to catch.

Listen to Hollowed describe his first encounter with a wild snake. Warning: Great accent ahead!

Hollowed’s thirst for snakes didn’t stop. A few weeks later on a trip to Key West with friends, he finally caught one and used it to his advantage. “We impressed women by telling them we caught a cottonmouth,” he said. “I don’t remember what it was, but I knew it wasn’t venomous.”

With a degree in Physical Education and a soccer injury that had halted his career, Hollowed figured he’d become a coach. But a move to Dallas and a temporary job in the Zoo’s warehouse changed everything. 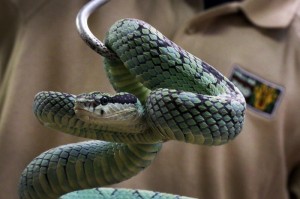 Sri Lankan green pit vipers are one of the snake species Hollowed is responsible for — he successfully bred about two dozen in 2014.

“Every time a reptile keeper would come into the warehouse, I’d ask them a million questions about their job,” he said with a laugh.

His overzealous interest eventually paid off. Curator of Herpetology Ruston Hartdegen offered Hollowed a six-month probation period, during which he had to read six textbooks with a test on each one, all while caring for about 50 animals. He aced those tests, and has now worked in the reptile department for three years, with a promotion to a Keeper II.

“People back home think I’m crazy because I work with snakes. I’ve never met an Irish person that likes snakes. Me ma thought I was mad. She worried about me when I first got the job,” Hollowed said. “I honestly never thought I would work in a zoo, it was so alien to me. Now I could never see myself doing anything else and I can’t thank Ruston enough for giving me this opportunity.”

Raised in a country where most people fear snakes, Hollowed says he wishes more Irish, and also Americans, would try to see how amazing they are. “They’re not the big, bad wolves everyone thinks they are. They’re so important for the ecosystem.”

So whether or not you believe St. Patrick drove the snakes out of Ireland, we believe we’re lucky to have a reptile keeper whose passion trumps fear. Cheers to you, Carl!