Just east of Matlock Road in Mansfield, Texas, a small, seemingly unremarkable plot of land overlooks a new shopping center. Graded for construction, the upturned earth impregnated with shale and red clay resembles so many other future building sites across the booming Dallas-Fort Worth Metroplex.

Yet this spring, this was the epicenter of a remarkable tale: a rare, 96-million-year-old dinosaur discovery by 5-year-old Wylie Brys and his father, Dallas Zoo employee Tim Brys.

When the cameras left, life returned to normal for Wylie, Tim, and Wylie’s mom, Sarah, also a Dallas Zoo keeper – with the occasional phone call from Brys’ mother, excited to share yet another news story she found. The news clippings will make a special keepsake for Wylie, still too young to truly appreciate having made the fossil find of a lifetime.

The excavation process is underway.

Foraging for fossils
Covered by ocean during the Jurassic period, much of North Texas is teeming with fossilized aquatic remains – if you know where to look. And amateur fossil hunter Tim did. He sometimes takes his son on treks near construction sites to poke around in the dirt, since buried rocks often surface there.

On a quest for fish fossils one afternoon in September, Wylie – who was 4 at the time – uncovered something much more significant.

“We were collecting some fish vertebrae, and had already found some big ones,” said the elder Brys.

“Wylie walked up ahead of me, and he came back with a large chunk of rib bone. I asked him, ‘Where did you find this?’ and then followed him back to that spot.”

Parts of the bones unearthed.

What is it?
Tim knew Wylie’s discovery was much larger than anything they’d found before, with more bones likely buried nearby. He also knew who he wanted to examine that bone: Dallas Zoo colleague and Nature Exchange interpreter Gerald Bogan, a longtime member of the Dallas Paleontological Society (DPS) and a walking encyclopedia of knowledge on paleontology, geology and the natural world.

Given the fossil’s location, Bogan and Brys figured it likely belonged to an ancient turtle, or maybe even a plesiosaur – a large, long-necked marine reptile that lived during the early Jurassic.

Either way, Bogan thought it significant enough to call in the FBI – otherwise known as the Fossil Bureau of Investigation, amateur fossil enthusiasts from DPS who investigate local fossil claims.

“We average three or four calls a month,” said Rocky Manning, FBI director. “Usually we tell them, ‘Sorry, but what you have there is just a rock.’ In this case, since Gerald thought it was something, I knew we could go ahead and call in SMU without even taking a look.”

Enter the experts from Southern Methodist University: Dr. Dale A. Winkler, director of the SMU Shuler Museum of Paleontology, and his colleague, Michael Polcyn, research associate and director of the university’s Digital Earth Sciences Laboratory. After a brief site visit, Dr. Winkler and Polcyn thought the remains were probably from a plesiosaur, since they’re common throughout the region. However, to confirm that hypothesis, their team first needed legal permission to excavate the location.

Hurry up and wait
Brys began researching the property and sought both the proper permits and required insurance waivers. For seven agonizing months, he returned to the lot almost daily to watch as workers prepared the site for development – seeing them dig a utility trench and run heavy equipment right near where the bones lay concealed.

“It made me ill to think the bones might end up buried under a parking lot or dumpster pad, and no one would ever know they were there,” Brys said.

Finally, the Dallas Zoo secured the necessary paperwork and the go-ahead from the property owners, who even stopped by to give their blessing in person.

“One of the owners mentioned collecting shells here as a child and showing them to her dad, who told her the area was once an ocean,” Brys said. “It was touching being able to share that same kind of experience with my son in the same spot – and I’m really appreciative that they allowed SMU to remove the bones for study.” 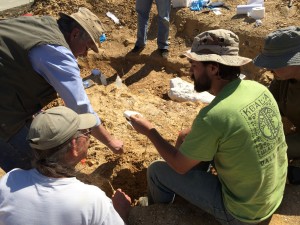 The discovery
Dr. Winkler, Polcyn and their team of SMU graduate students and DPS volunteers headed out to the dig site April 3 – coincidentally, just two days after the Zoo unveiled its new Giants of the Jurassic dinosaur exhibit, which Tim had helped set up. The uncanny timing must have been fate, because the paleontologists soon realized they had something much rarer than just another aquatic reptile.

“When we had a chance to examine the site and other bones, it became obvious that we didn’t have a plesiosaur, but a dinosaur,” Polcyn said.

Winkler and Polcyn believe the specimen – which they estimate at 9- to 12 feet long – belongs to a family of tank-like dinosaurs called Nodasauridae, an earlier relative of the well-known club-tailed ankylosaur and somewhat resembling (but not related to) a giant armadillo.

Meaning “knobbed lizard” in Greek, nodosaurs were plant-eaters with small, leafy-shaped teeth that lived from the mid-Jurassic to near the end of the Cretaceous Period, first making their appearance in Texas 100.5 million years ago. About the size of a VW Beetle, they had distinctive bony plates called osteoderms that grew within the skin and protected the upper part of their broad, curved bodies and heads from predators like Allosaurus and Tyrannosaurus rex.

And just how did a land-dwelling dinosaur end up buried at sea? “After death near the shore, their bodies bloated in the water and then floated out like giant armored beach balls,” Winkler said. 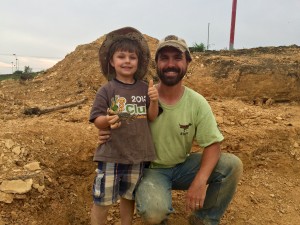 A find for the ages
Based on the bones they extracted (with a little help from Tim and Wylie), Dr. Winkler estimates this fossil is 50 percent complete – likely the most complete nodosaur skeleton ever discovered. It’s also one of only five ever found in the Metroplex, and the first since the 1990s. The bones were uncovered in the Tarrant Formation, lying atop a gray layer of bentonite (volcanic ash) in what was once the Western Interior Seaway, a body of water that forged a connection from the Gulf of Mexico to the Arctic Ocean 102-104 million years ago.

Because the Tarrant Formation rests upon a well-studied ammonite (extinct marine mollusk) zone tied to the Cenomanian Stage of the Cretaceous (93.9-100.5 million years ago), Winkler believes the nodosaur fossil is close to 96 million years old. The SMU team also took a sample of the bentonite found beneath the specimen; if they can isolate any minerals present, they may be able to radiometrically date them and, comparatively, the fossil itself. 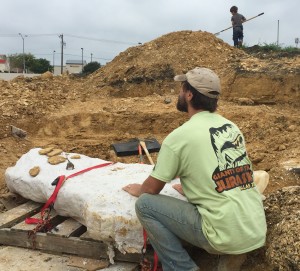 The largest portion of the fossil is ready for pick-up.

While this particular fossil is a rare find (potentially a new genus and new species), it’s not unheard of for amateur paleontologists to dig up significant specimens. In the DFW region, amateurs made more than a dozen vertebrate fossil discoveries in the past 25 years, three of them by children. Working together with credentialed paleontologists, local amateurs have uncovered new species ranging from Dallasaurus turneri (a mosasaur) to Pawpawsaurus campbelli (another nodosaur). And in addition to finding fossils, DPS members, local collectors and other volunteers contribute thousands of hours to excavations and preparation in the labs, an essential collaboration.

On April 6 – with Tim and Wylie present – the dig team removed and transported the main nodosaur fossil block to the Shuler Museum for further study and identification. Two days later, they scoured the site one last time and located additional bones several feet away – a large thigh bone and several toe bones. The museum team then began the long process of cleaning and identifying them, which will take months.

“During the dig, we found a number of bony plates of different sizes and types, which vary from [nodosaur] species to species,” Polcyn said.  “So at this point we aren’t certain what species we have, or if it’s potentially a new species.”

Added Winkler: “But given the rarity, and the suspected geological age, it’s potentially something we haven’t seen before. You never know until you get them back into the lab to prepare them and see what you have.”

Reflecting on the find
When Brys thinks back on this experience, he’s amazed at his son’s beginner’s luck. They may never find another dinosaur again – but they’ll still enjoy combing through the dirt, spending time together in the great outdoors. And after helping out on a real dinosaur dig, they’ve gained some valuable field experience.

The fossil remains under processing at SMU’s laboratory, where Brys has been helping in his spare time. So far the team has discovered a femur, foot bones, ribs, and a number of osteoderms (armor plates). SMU graduate student, Matt Clemens, who helped in the excavation, is taking over study of the dinosaur as part of his Ph.D.

One thought on “Dinosaur-hunting: A famous fossil safari”