How do you introduce lions? Very carefully

Posted on September 2, 2015 by Lydia Jennings 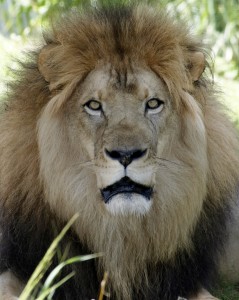 11-year-old lion Kamau is settling in well at his new Dallas Zoo home.

Some people have magical, undeniable chemistry at first glance, while others slowly grow into it, and some can’t stand the sight of one other instantaneously. The same goes for the animal kingdom.

And cats have even more stubborn sass than most. (Who can relate when it comes to your house cat? Fierce feline of the household? Ruler of all things human? Yep. You get it.)

Now take the audaciousness of your 12-pound house cat and multiply it by nine lives, three African lions, 12 paws, one mane, and three very different temperaments. 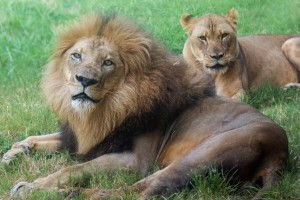 Kamau and Lina enjoy a day out in the habitat together.

This spring, we welcomed 11-year-old Kamau from Zoo Atlanta. He’s here on a breeding recommendation through the Association of Zoos & Aquariums’ Lion Species Survival Plan (SSP).

A handsome man at 420 pounds with a massive mane, Kamau has been genetically matched with lioness Lina. And for her, the fireworks are shooting off at full speed. She’s a downright flirt! 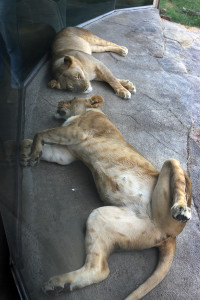 Sisters Lina & Jasiri nap together at the exhibit window.

The two have been going out into the lion habitat for a few weeks now. Kamau also has begun meeting his leading lady’s sister, Jasiri. But Jasiri hasn’t been as warm and welcoming, which is why keepers took her introduction with Kamau slowly.

That careful planning paid off. This week, Kamau, Lina and Jasiri went out into the habitat together as a pride. It was positively uneventful in lion introduction terms.

“We’re still working through the process as it’s all so new, but we’re excited with how well things have gone so far,” said Lora Baumhardt, carnivore supervisor. “We anticipate continued progress and always keep the animals’ welfare and interests in mind.”

We’re extremely proud to have a pride together again. And hey, if cubs come out of it, that’s just an added bonus!

One thought on “How do you introduce lions? Very carefully”