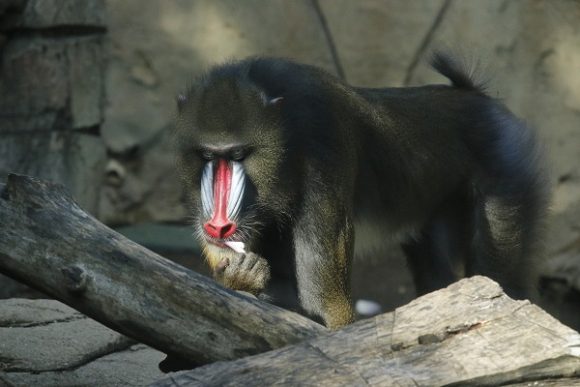 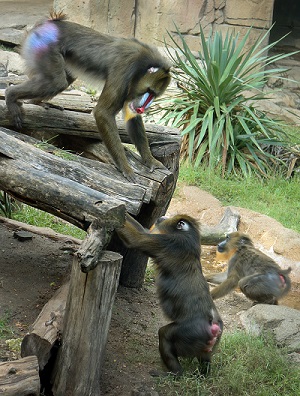 Jax shares an inquisitive moment with Saffron and her son Obi.

Milo’s sudden death left Dallas Zoo staff at a loss. But that winter, after a long search, we welcomed Savuti, a geriatric 23-year-old male mandrill from the Buffalo Zoo. Savuti would become Obi’s father figure.

But more than a year later, Savuti passed away from age-related health issues, which wasn’t unexpected due to his advanced age. And again, our search was on to find a male who would bring our family troop together and teach Obi how to be a respectful adult, so he could one day take over the troop.

That’s where 9-year-old Jax comes in. He arrived in August from Lowry Park Zoo in Tampa, Fla. Jax lived with his father, and due to this, he hasn’t developed into his full male mandrill size. But that’s about to change, and all our visitors will be lucky enough to witness his transformation. 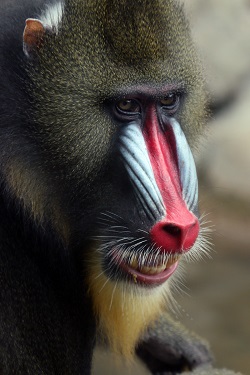 Juvenile male mandrills who live in close contact with a dominant male can be hormone-suppressed, and may stay skinny with drab colorations, as to not compete with the dominant male.

Dominant male mandrills have even more brightly colored faces and rumps than females and juvenile males, and an impressive mane and beard, too. They also have a stockier body, and you can see that our Jax is still rather skinny and lanky. We’re excited to see that since Jax has moved into our mandrill barn and met his new family, his colors already have begun to pop.

Here on an Association of Zoos and Aquariums Mandrill Species Survival Plan (SSP) breeding recommendation, Jax has been paired with Obi’s mom, Saffron, and we hope they will bring Obi a little brother or sister, as well as becoming a needed male role model in Obi’s life.

Jax sits in the window of the mandrill habitat and absolutely loves to smile at visitors. Mandrills are the only primate species, besides humans, who actually “smile” as a greeting; most other primates only show their teeth when they’re “fear grinning.” He also is very particular about his food, rinsing off produce in the habitat streams before he eats it.

Come watch Jax, Obi, and Saffron getting to know each other in our mandrill habitat at the entrance of the Wilds of Africa. We look forward to sharing more developments as our troop becomes more bonded.

One thought on “New male mandrill to unite family troop”