Elephant introductions: A peek at a very complicated process

It’s been eight months since we rescued five elephants from Swaziland, Africa, in an intricate airlift to save their lives. Since then, we’ve been introducing the new arrivals – Nolwazi, Amahle, Zola, Tendaji and Mlilo – to our four “Golden Girls,” Jenny, Gypsy, Congo and Kamba.

And believe us, entire NASA expeditions to outer space may have been launched with less care, planning, observation and hard work. Have you ever introduced a new pet to your family? Now imagine it with 10,000-pound animals.

All summer, the nine adult elephants have been in various parts of the Giants of the Savanna habitat, getting to know each other and forming their own complex social bonds. The arrival of calf Ajabu in May brought great joy, but added another layer of complexity to the introductions. 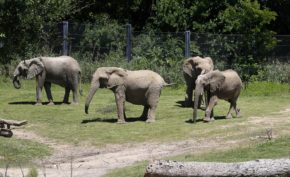 Congo, Kamba, Tendaji and Zola graze together in the Giants of the Savanna habitat.

Our keepers have monitored the elephants almost around-the-clock. (They even slept in the elephant barn after Ajabu was born, to keep an eye on the little guy.) And our research scientists and volunteers keep detailed notes of all of the interactions, to chart the herd dynamics.

It’s been complex, exhilarating, humbling, emotional, sometimes nerve-wracking – and incredibly rewarding. So we’d like to share just a bit of our daily lives with these remarkable creatures, taken from our team’s observation notes and interviews.

Remember, training occurs simply so we can provide better medical and husbandry care for the elephants. We utilize “protected contact,” not sharing their space, so we let elephants be elephants.

(Note that the italic comments are just a bit of editorial license with our scientists’ detailed observations).

This is just a sampling of the work our dedicated elephant team does every day to care for these magnificent animals in our care. Our elephant curator, Karen Gibson, and her team are second to none, able to pull off this rescue and integration of herds so seamlessly. Please come meet them at one of our Keeper Talks!

2 thoughts on “Elephant introductions: A peek at a very complicated process”