She might be small in size, but there’s nothing little about the spirited personality of our first-ever newborn tamandua. Meet baby Cora, a lesser anteater known as a tamandua, who was born Feb. 25 to mom Chispa and dad MJ.

In just over six weeks, Cora has more than doubled her birth weight, and is now a healthy two pounds.

Her birth is a major feat for a troubled species – her full name, “Corajosa,” means “brave” in Portuguese, and this little one is courageous indeed. Tamandua births are rare in zoos, as the species requires specialized care and has specific nutritional needs. Just three babies survived last year in AZA-accredited zoos. 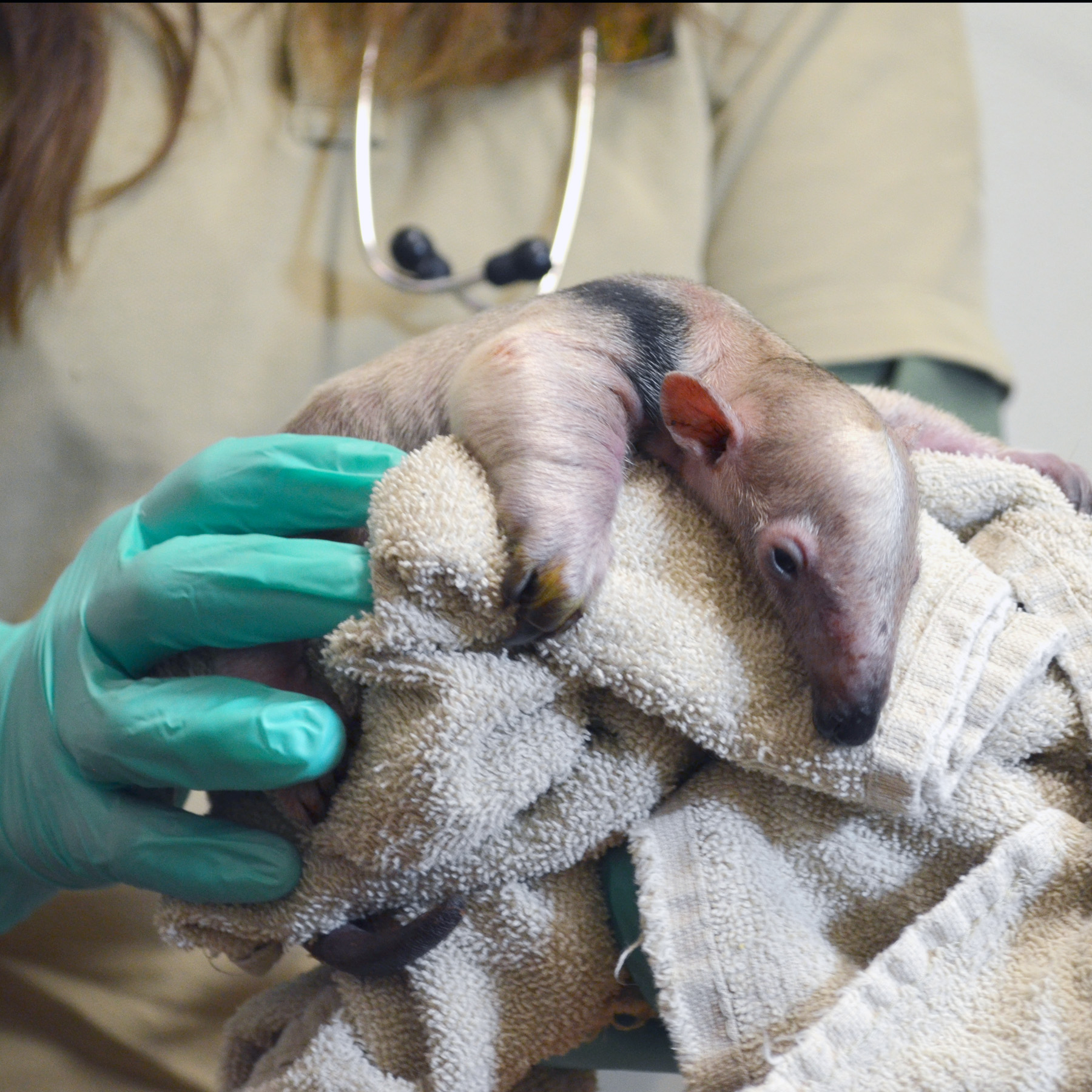 Vets perform a well-baby check on the one day old pup.

Zoos are working hard to learn how to help this unique species thrive in human care. And Dallas Zoo’s vice president of Animal Operations & Welfare, Harrison Edell, is a major key to the survival of tamanduas. As the coordinator for the Association of Zoos & Aquariums’ Southern Tamandua Species Survival Plan, Edell is responsible for the success of the 70 tamanduas living in North American zoos.

That effort is necessary because sadly, the growing illegal pet trade has led to the removal of an alarming number of tamanduas from their habitats in Central and South America. Imported into the U.S. and kept as exotic pets, hundreds have died due to lack of expert care.

“From 2000 to 2012, 475 tamanduas were sold into the exotic pet trade and imported into the U.S.,” Edell said. “These animals are very difficult to keep healthy in human care, as their nutritional needs can be really challenging. In the wild, tamanduas can consume nearly 9,000 ants a day. In all likelihood, those 475 animals are no longer living.”

Cora’s father, MJ, came to Dallas from the Staten Island Zoo as a SSP breeding recommendation, and this birth is a testament to the dedication of our animal care experts, who work hard every day to protect and ensure the longevity of this species.

The apple – or avocado, if you’re a hungry tamandua – doesn’t fall far from the tree with Cora. There’s no doubt she takes after mom Chispa, a lively and charismatic tamandua whose name means “spark” in Spanish.

“Chispa is a fantastic mom,” said Allyssa Leslie, Animal Adventures Outreach manager. “They cuddle up and sleep together for a good portion of the day, and when they’re awake, Cora enjoys riding around on mom’s back.”

This may not seem like much, but don’t be fooled – Cora’s as outgoing as a tiny tamandua can be!

“Cora is a very active and feisty young lady. We feel that her name perfectly describes her personality,” Leslie said. “There is no doubt that she 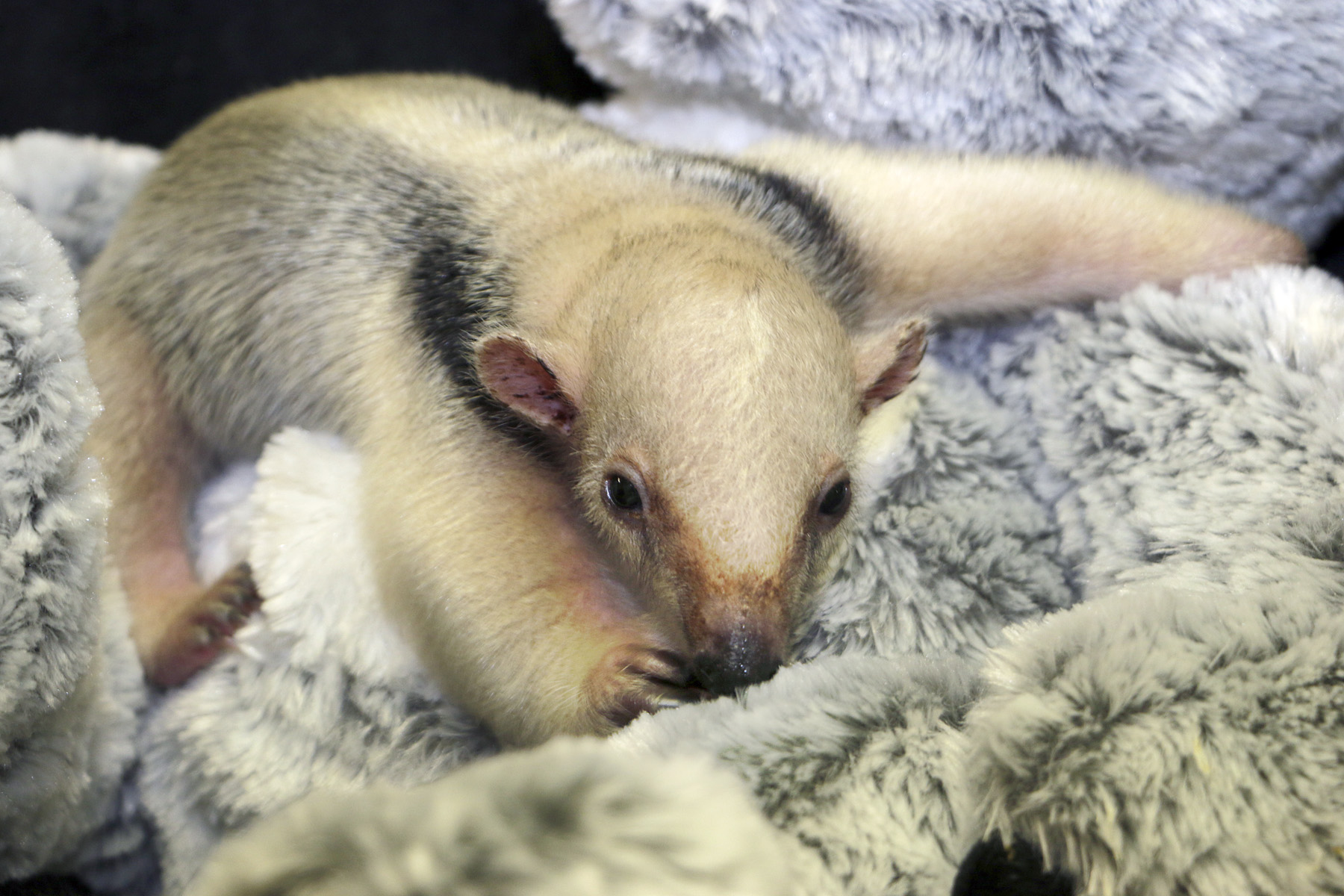 is her mother’s daughter.”

AZA partners, such as the IUCN’s Anteater, Sloth & Armadillo Specialist Group, continue to raise awareness about this international concern, educating residents in the tamandua’s home range and encouraging the protection of these creatures rather than their commodification.

Both Cora and Chispa will remain off exhibit while they bond, but will return as important animal ambassadors in our Animal Adventures outreach program. The duo will travel to schools, hospitals, and events in north Texas, informing the public about the illegal pet trade and habitat loss faced by the species.