Nine-year-old Chrystal went into labor around 8:30 p.m. after keepers had gone home for the day. But during a scheduled 8:30 p.m. check-in via the barn’s closed-circuit cameras, they could see what appeared to be hooves emerging. A group of keepers and our on-call veterinarian headed into the Zoo to monitor the labor more closely.

Around 11 p.m., Chrystal calmly delivered her second calf – this time, without intervention. (You may remember when her first calf Kopano was born in 2014, vet staff intervened and helped 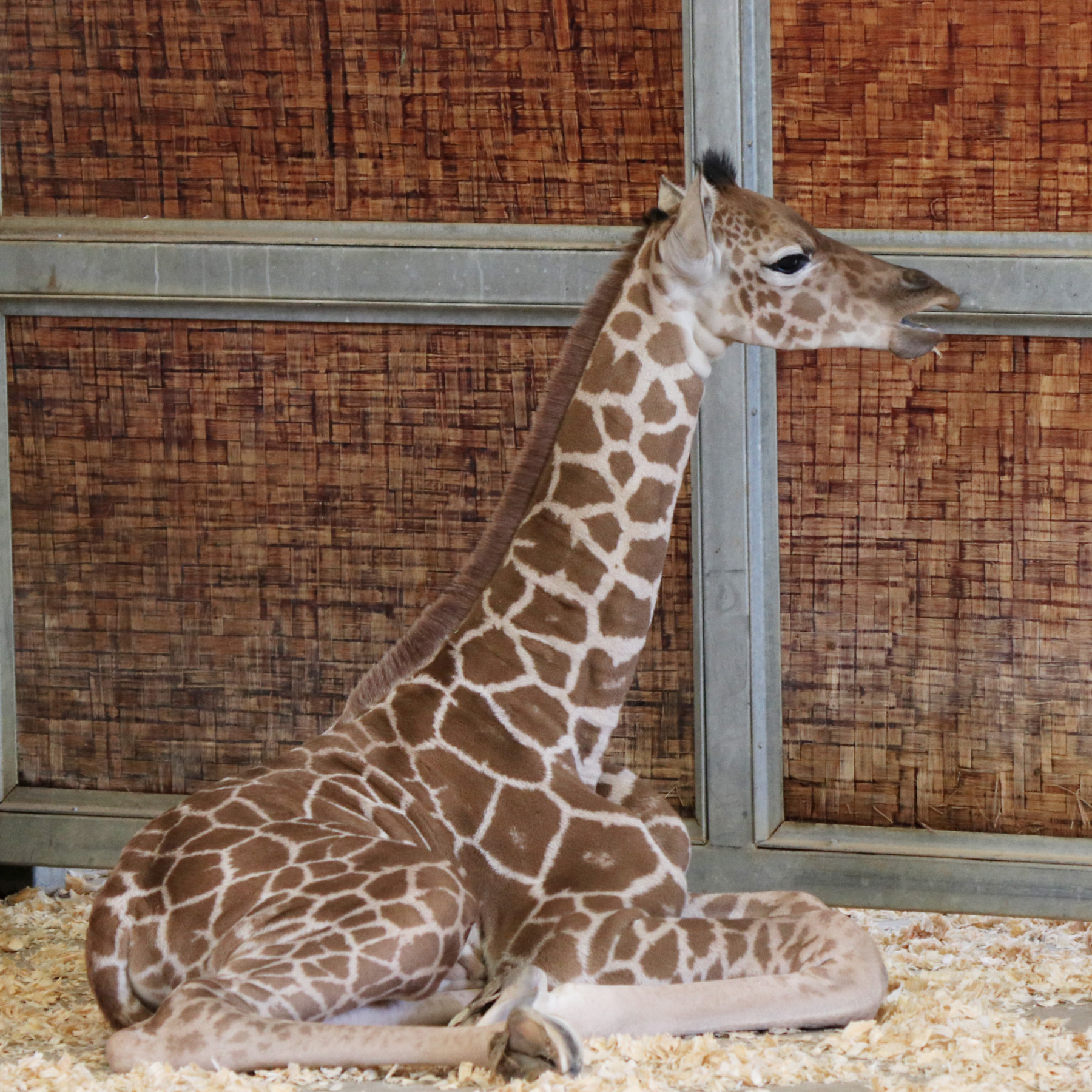 deliver the baby after a long labor.)

After the baby dropped onto the soft sand, Chrystal immediately began cleaning its face, allowing the baby to take deep breaths. Once the calf sat up, Chrystal gently encouraged baby to stand. Following a few wobbly attempts on its new legs, the calf stood up only 20 minutes after birth. Shortly after, the calf got the hang of walking, and then nursed just 45 minutes after birth.

“Chrystal showed us once again that she’s a very attentive mother,” said Allison Dean, assistant supervisor of giraffes. “She’s been busy cleaning, nuzzling, and nursing her new little one who spends a lot of time eating and even more time napping. It’s hard being that cute.”

Chrystal and her calf remain behind the scenes where they are bonding privately (of course, with interested onlookers, like “Uncle” Auggie, peering over the maternity stall to check in on the two).

In the wild, the animal kingdom’s tallest and longest-necked species is facing what conservationists call a “silent extinction.” With fewer than 80,000 wild giraffes left – a 40% drop in the past 15 years – their conservation status was up-listed to “vulnerable” last year by the International Union for Conservation of Nature (IUCN). The Dallas Zoo cares for the reticulated giraffe sub-species; it’s estimated there are fewer than 8,700 left in the wild, according to the Giraffe Conservation Foundation.

The calf’s father is Tebogo, one of our most social and well-known residents. Tebogo is our only breeding male under the Association of Zoos and Aquariums’ Giraffe Species Survival Plan’s (SSP) program to ensure genetic diversity within endangered species. Tebogo also is the father of our last four calves born at the Dallas Zoo.

Chrystal and her baby will venture into the giraffe feeding yard within the next few weeks for guests to meet them. And over the next few months, the baby will slowly meet the other nine giraffes in the herd.