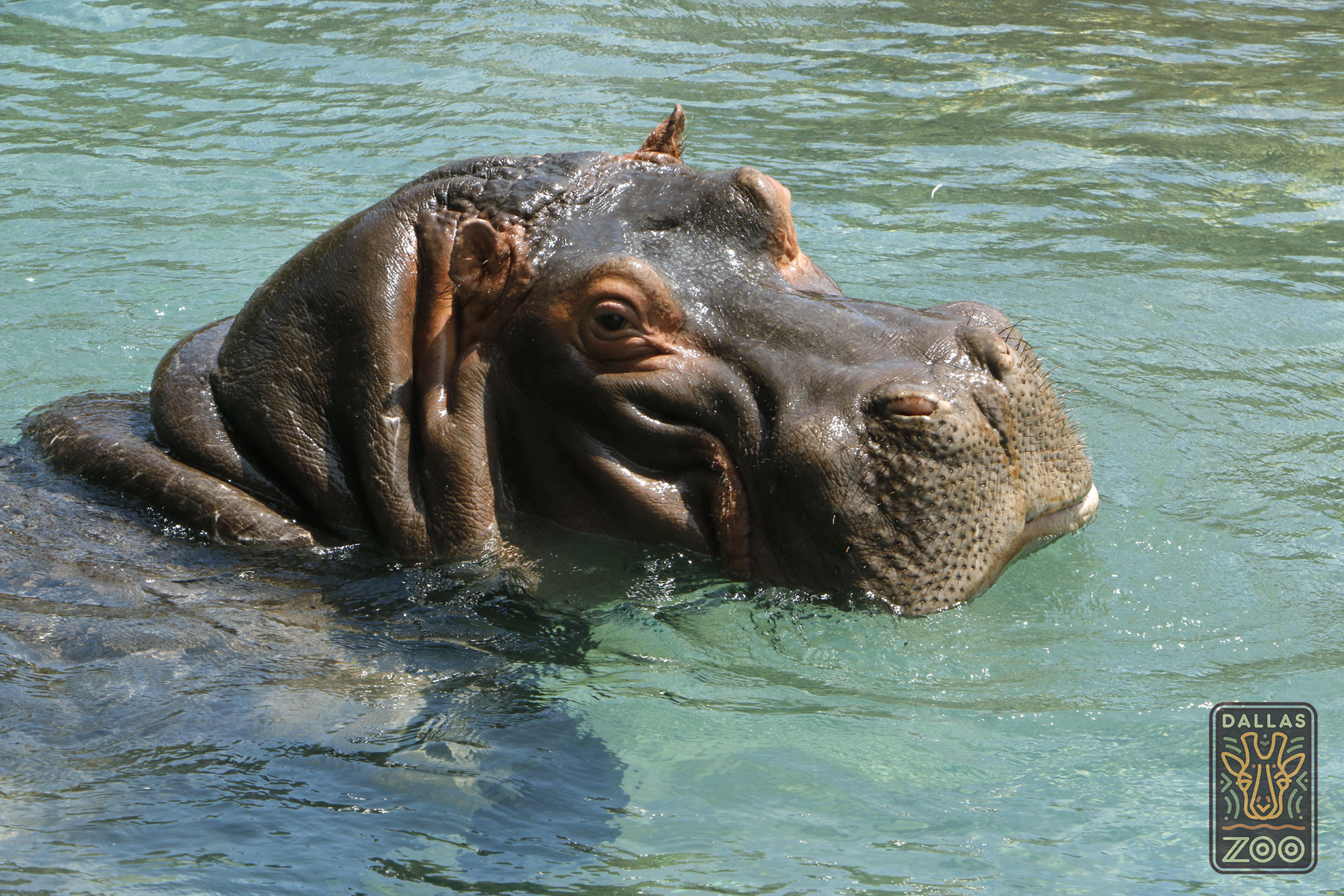 “The moves were smooth and uneventful, and our new residents have settled in nicely into their new home,” said Harrison Edell, vice president of Animal Operations and Welfare at the Dallas Zoo.

Six-year-old male Adhama arrived Tuesday morning from the Los Angeles Zoo and Botanical Gardens. The 3,722-pound hippo was loaded safely into a massive custom travel crate on an 18-wheeler Monday for the 23-hour drive. The tandem driver team drove straight through, stopping often to feed, water, and spray water on the giant amphibious animal.

Once Adhama’s travel crate was lifted off the truck and taken to the spacious new hippo barn, he wandered right out and into a sand-filled outdoor yard. Keepers met him with crisp fresh romaine lettuce and other treats. The big guy inspected every inch of the barn, room by room, before taking a snuffling drink from one of the indoor pools. Soon after, he slipped into his private pool. (The amphibious animals often choose to spend up to 16 hours a day in water.)

The driver team then hit the road again, this time to Albuquerque, N.M. At the Albuquerque Biological Park, zookeepers carefully repeated the loading process with 10-year-old, 2,395-pound female Boipelo, and the drivers took off once more for Dallas. Late Wednesday night, less than 36 hours after Adhama arrived, Boipelo made her grand entrance.

After stepping out of her travel crate, she cautiously made a few rounds of the outdoor yard, then entered the night quarters, nabbed a few bites of romaine lettuce, and immediately plunged into her pool.

Adhama was instantly interested in his new mate, leaving his pool and sniffing the air intently. The pair have been matched on a breeding recommendation through the Association of Zoos and Aquariums’ Species Survival Plan (SSP).

“Over the next 30 days while the hippos are in quarantine, our keepers, veterinary staff and nutritionists will keep a close eye on them to ensure they continue to do well,” Edell said. “For now they’re living in separate halves of the new barn, but because of its open design, they’ve already ‘met’ each other through the fences and are getting along well.”

The 2.1-acre Simmons Hippo Outpost is an immersive African waterhole habitat that includes a 24-foot by 8-foot underwater viewing area, which will allow zookeepers to teach guests about conservation efforts to help protect the world’s third-largest land mammal.

Papa, who passed away in 2001 at age of 53, was the last hippo to live at the zoo until now. At the time, Papa was the oldest Nile hippo being cared for in a U.S. zoo.

Texas may be known for horses and cowboys, but a couple of new “river horses” that soon will call the Dallas Zoo home won’t be seeing any saddles or lassos. 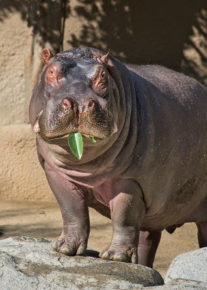 Adhama eats some greens at the L.A. Zoo./Courtesy L.A. Zoo

Adhama, a 6-year-old male from the Los Angeles Zoo, and Boipelo, a 10-year-old female hailing from the Albuquerque Biological Park, will be the first hippos at the Zoo in more than 16 years.

Through the Association of Zoos and Aquariums’ Species Survival Plan (SSP), these two Nile hippos are being paired on a breeding recommendation in hopes that one day they’ll start their own family.

So let us introduce our newest residents:

Rita Huang, assistant supervisor of the Dallas Zoo’s Inner Wilds of Africa, recently traveled to Los Angeles, where she got to meet the 3,722-pound Adhama and learn about his personality, training behaviors, likes/dislikes, if he’s a diehard L.A. Dodgers fan or willing to convert to the Texas Rangers, and much more.

“Adhama is a sweet boy,” Huang said. “He’s very curious, likes to climb, and enjoys a nice face-rub from his keepers. He also loves to sleep under the sun, and is very particular about the temperature of his water.”

Fascinating fact: Adhama has three half-sisters, all with the same mom but different dads. Those females are the great-granddaughters of the Dallas Zoo’s former hippos, Mama and Papa! Mama passed away in 1984, and Papa died in 2001 at age 53. At the time, Papa was the oldest Nile hippo being cared for in a U.S. zoo. And he was the last hippo to live at the Dallas Zoo, until now. 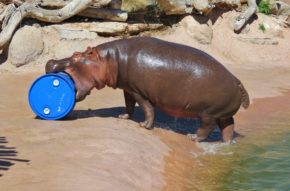 Boipelo bites down on an enrichment item at the Albuquerque Biological Park./Courtesy of ABQ BioPark

Born Aug. 17, 2006, Boipelo lives with her mom, dad and younger brother at the ABQ BioPark.

“This 2,395-pound girl is extremely playful,” Huang said. “She enjoys dragging logs around her habitat and pushing her ball around. She’s also very particular about her enrichment items. In the morning, keepers say they’ll come in to find that she’s placed all her objects back in the same spot in the barn.”

These super-social animals will meet within days after arriving in Dallas.

Welcome the duo to Texas and show ’em your favorite local spots. Print out and color this hippo coloring sheet, and snap a picture with your “flat hippo” at your beloved spots throughout DFW. Tag your “flat hippo” photos on social media with the hashtag #DallasZooHippos and we’ll pick a few of our favorite photos to feature!