Tasanee and Duranjaya snuggle up in their habitat

In honor of World Otter Day, we would like to take a moment to introduce you to the world of otters, especially our Dallas Zoo otters. You might be wondering, why are otters so important?  There are 13 species found all over the world including Europe, Africa, Asia, and North & South America, where they often serve as symbols of healthy wetlands. Otters are truly amazing animals; not only are they fun to watch, but they play a huge role in indicating a healthy environment, which is important to all species – including us!

It is important to note that 12 out of the 13 otter species worldwide are on the decline due to hunting for the illegal fur trade, reduction in available prey, habitat destruction, and road deaths.

But did you know we have otters in our own backyard? North American River Otters (NARO) can be found all over the U.S., including the stints of the Trinity River that run straight through Texas.  For several years, Texas was an otter-less state, but through clean-up efforts, NAROs have been able to make an amazing comeback.

Here at the Dallas Zoo, we care for Asian small-clawed otters (ASCO) which are the smallest otters, weighing in around 8-10 pounds and reaching only 2 feet in length.  The Giant River Otter of South America, the largest of the species, can grow up to 6 feet in length and weigh an average of 70 pounds.  Our otters are the most social of all the river otters, living in large family groups of up to 15-18 in the wild.  Currently, at the Dallas Zoo, we house two breeding pairs.  These pairings were suggested by the Species Survival Plan (SSP) and the stud book coordinator for ASCOs.

Jimmy, who is 11, was born here at the Dallas Zoo in 2006.  He has just recently been paired with Jelly, a 6-year-old female born at the San Antonio Zoo.

Tasanee, age 3, was also born here at the Dallas Zoo to Jimmy and his companion at the time, Daphne.  Tasanee has been paired up with Duranjaya, an 11-year-old male, who was born at the Newport Aquarium and arrived in Dallas almost 2 years ago.

You can see our otters at the Betty Moroney Norsworthy Otter Outpost where these two groups split their exhibit time. They spend their days swimming, eating, and playing in the large pool or napping almost anywhere on the exhibit. Take your time when you visit—they can sometimes be hard to spot, but they are always “otterly” adorable!!

Don’t forget to do your part to help keep north-central Texas waterways clean and otter-friendly.

Zoo vocabulary lesson: Stationing (or ‘how to ask an otter to sit still’)

Visitors to our Betty Moroney Norsworthy Otter Outpost have many ways to describe the personalities of our Asian small-clawed otters: quick, energetic, playful. 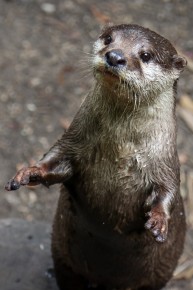 But what’s a zookeeper to do when we need a hyper otter to sit still?

You teach them to “station.” Stationing is a behavior training that our otters and many other animals (big and small) learn. Specifically, it’s when an animal is asked to sit or stand still at a designated area.

As simple as it sounds, stationing has many benefits for the animal and the zookeeper.

For every successful station, the otter receives a delicious treat. All training done at the Dallas Zoo is through positive reinforcement, and our animals are never forced to do any behaviors. They’re asked nicely and rewarded.

Stationing is also the first step to learning other behaviors like target training, spin, scale and reach. All of these behaviors help zoo staff inspect the otters and administer medicine and vaccines safely and easily.

Visit our otter keeper talks Thursday through Sunday at 1:30 p.m. and you may see the stationing yourself!

The delivery stork had a direct flight path to the Dallas Zoo last year! With more than 2,000 animals, we often welcome little ones. From (really) long-legged babies to ones the size of your palm, here’s a roundup of some of our exciting and noteworthy births in 2014:

TASANEE: Born Jan. 25, Asian small-clawed otter Tasanee needed more than 100 days of devoted care from her keepers, because single otter pups usually don’t survive. Tasanee weighed just a little over 2 ounces at birth, about the size of a “C” battery. She’s now a healthy five pounds and is full of sass! She’s very close with her parents Jimmy and Daphane who can often be seen diving deep down into their pools together or snoozing away, cuddled up with each other. 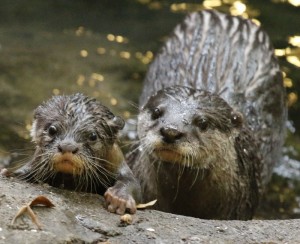 Otter Tasanee gets the hang of swimming with mom Daphne.

MSHINDI: Look at that face! Still very much a baby, Mshindi turned one year old on Jan. 26. For another two years or so, he’ll remain completely dependent on his mother, Ramona, for care. He’s now eating small amounts of food (bananas are his favorite), but also will nurse for another few years. Mshindi is the ninth member of the troop, and the first baby born since his brother, Kona, arrived in 2009. He’s added a positive dynamic to the troop’s complex social structure, especially with Kona, who has proven to be a great big brother. 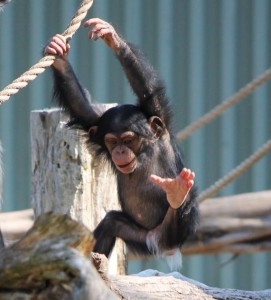 OBI: Born March 28, Obi is the first mandrill baby at the Zoo in 24 years. This little guy has a lot of energy and is often seen bouncing all over his habitat, throwing small branches in the air and playing peek-a-boo with guests. Monkeys develop much faster than great ape babies, like chimp Mshindi. Obi no longer nurses and is now completely independent from mom Saffron. But she’s still the little guy’s favorite playmate (she has incredible patience!). 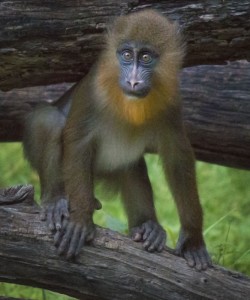 KOSOKO: This kori bustard chick still has some growing to do before he officially becomes the largest flying bird on Earth, weighing nearly 40 pounds. Born June 25 at just a half a pound, Kosoko is now a healthy 15 pounds. After multiple years of trying, Kosoko is the first surviving offspring for his parents — which is where he gets his name. From the African Yoruba language in Nigeria, “kosoko” means “child born after mother has had other children die.” It’s meant as a prayer for babies’ survival — and we couldn’t be more thankful for Kosoko’s health and well-being. 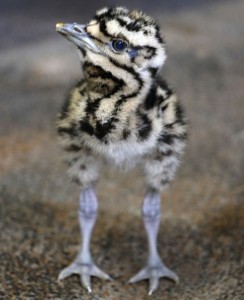 Kori bustard chick Kosoko will grow up to 40 pounds.

KOPANO: We welcomed this leggy, 6-foot-tall baby Oct. 26. Born weighing about 120 pounds, Kopano is now nearly 8 feet tall and over 300 pounds! He’s starting to munch on vegetation like mom, but will keep nursing until he’s about a year old. He’s doing great mixing with the other species in his habitat, including impala, ostriches and guineafowl. He’s also still meeting all 11 members of his herd. Guests can often see him running laps around his habitat while mom Chrystal eats. 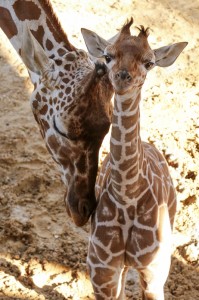 It’s not just humans who show love and affection toward each other. During this season of love, we wanted to share with you some of our longtime animal couples who just can’t get enough of each other. Humans: take note of these inspiring, lovable partnerships.

Mason & Julius: These gibbons have been together for four years, earning the name “the newlyweds” by their keepers. While they haven’t had a baby yet, Mason and Julius couldn’t be more bonded. Gibbons are one of the few serial monogamous primates. These two are constantly hugging and cuddling — making some of the simplest tasks, like separating them to work on training techniques, nearly impossible for their keepers. 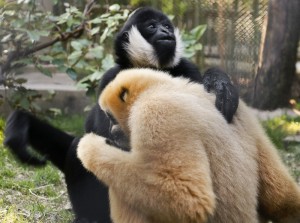 Cory & Bolivia: Together for more than 13 years, with 11 babies together, these titi monkeys know how to keep the love going! Adult titi monkeys form lifelong partnerships. Cory and Bolivia are often seen sitting in the Primate Place treetops with their tails intertwined while they groom one another. Cory is very protective of his leading lady and can’t stand to be away from her for very long. 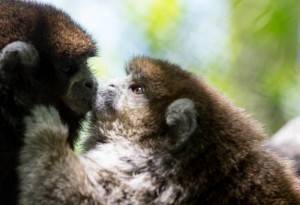 Curtis & Darlene: These true “love bids” have been together for six years and remain a very affectionate and faithful couple. Guest favorites in Travis & Zach’s Birds Landing, cockatiels Curtis and Darlene have hatched four chicks together. The duo and their offspring are usually the first to greet visitors as they walk into the aviary, even if they don’t buy food! Curtis likes to woo guests with his whistle song and preen their hair. Darlene’s a cool chick and never gets jealous — she usually watches his antics from atop the nearest guest’s head or shoulder. 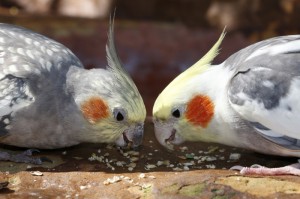 Batt & Carol Lee: Brought together in 2005, Batt didn’t need to court Carol Lee – there was an instant attraction. And shortly after meeting, their three pups were born. Batt is one of the oldest Asian small-clawed otters on record, at almost 19 years old. As he’s aged, he’s developed sight issues but Carol Lee has proved to be a loyal partner, guiding him with a nudge of her nose and bringing him food. The two can be seen sharing quite a few snuggly naps together. 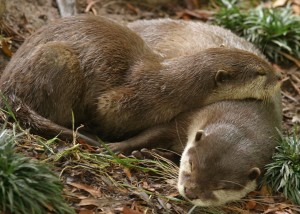 Otters Batt and Carol Lee cuddling during a nap./Dallas Zoo

Ramona & KC: Ramona came to the Zoo in 2006 and instantly caught KC’s eye. Three years later, they welcomed little Kona. KC also may be the father of 1-year-old Mshindi, but we’re awaiting paternity results to confirm. Their relationship has its ups and downs just like any, but they show sweet moments of affection, which make for great photo opportunities! 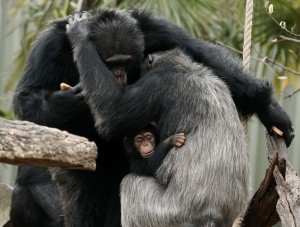 KC and Ramona hug with little Mshindi in between./Dallas Zoo