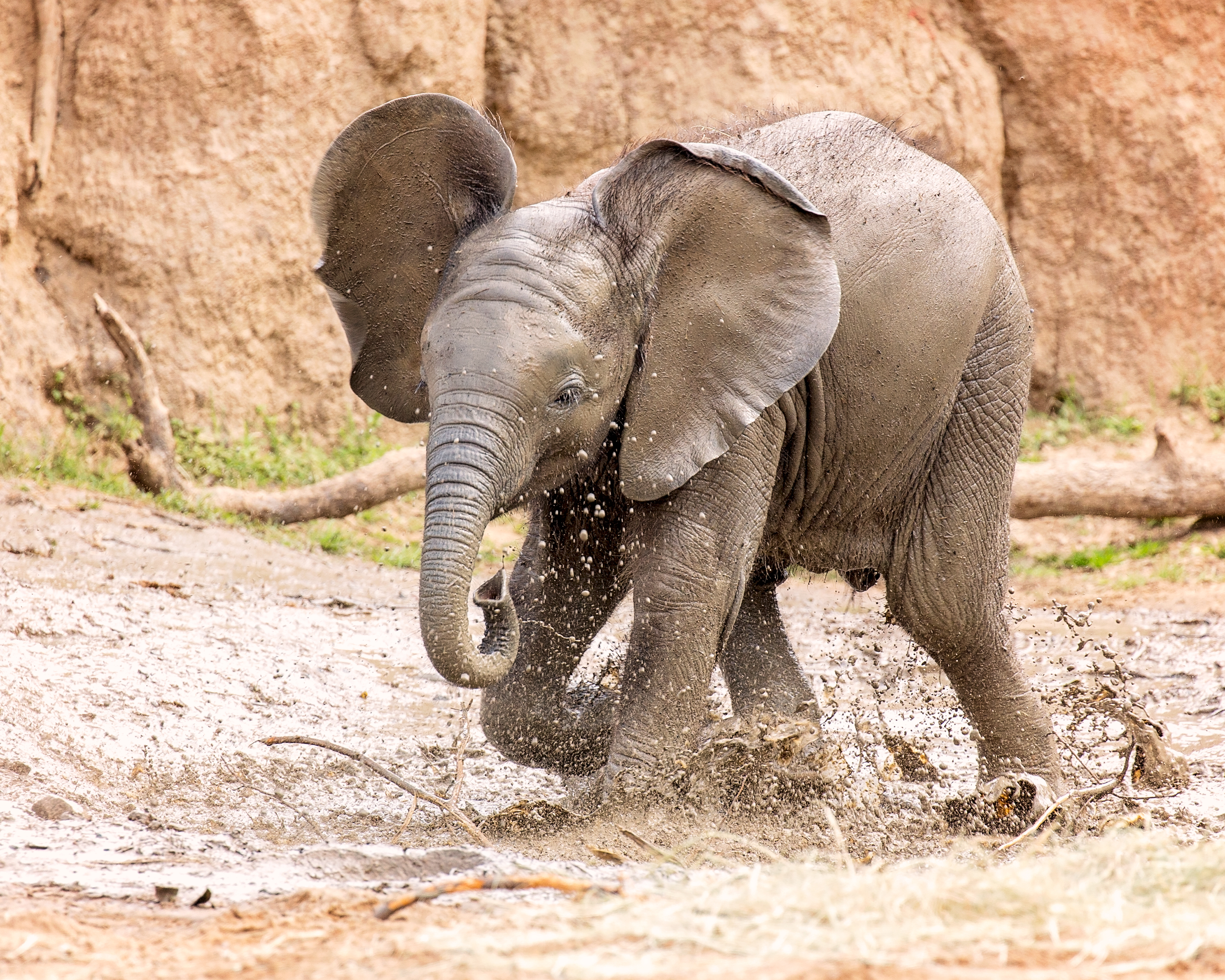 Loyal and loving fans of our baby elephant, Ajabu, and his mom, Mlilo, one of the elephants rescued from drought-stricken Swaziland this spring, can now see the mother-son pair in the Giants of the Savanna.

Earlier this week, the 5-month-old calf and his mom were gently introduced to the lower portion of the Giants of the Savanna habitat. But starting today, Ajabu will make regular appearances outdoors, weather permitting. The elephant care team will keep a watchful eye on temperature and rain to ensure that our growing calf remains safe and healthy.

“It’s an incredible feeling to see how involved the public has been in Ajabu’s five months of life without meeting him until today,” said Gregg Hudson, Dallas Zoo president and CEO. “Ajabu is a remarkable ambassador for his declining species, and now he’s able to connect our community even more to the importance of protecting African elephants.”

After his birth, we allowed several months for the calf and mother to bond privately while staff worked to “baby-proof” every area the baby

would inhabit, including two barns, behind-the-scenes yards, and the lower portion of the Giants of the Savanna habitat.

Portions of the habitat, which includes 12-foot-deep ponds and gaps that needed to be closed off, were safeguarded for the well-being of the little fellow. A shallow portion of the pond remains for the water-loving calf to enjoy. And as he grows, he will be given access to deeper parts of the pond.

At birth, Ajabu weighed 175 pounds and stood about 3 feet tall, with a tiny trunk just over a foot long. He’s now up to 332 pounds and stands almost 4 feet tall. His teeth are starting to grow in, and he’s experimenting with solid foods, like produce and hay. He still nurses often and remains close to Mlilo, who remains the ultimate, protective mom.

A constant ball of energy, Ajabu enjoys “sparring” with tree branches, pushing his favorite ball around, and exploring with his trunk, which he recently discovered makes noises when he’s excited.

In addition to Ajabu and Mlilo, who’s believed to be about 14 years old, the Swaziland elephants at the Dallas Zoo include bull Tendaji and females Zola, Amahle and Nolwazi. All range in age from 6 to their mid-20s. They join our four “Golden Girls” – Jenny, Gypsy, Congo and Kamba – in the award-winning Giants of the Savanna habitat. Ajabu and Mlilo eventually will join other herd members in the habitats after careful, methodical introductions.

Earlier this year, the Dallas Zoo collaborated with conservation officials in Swaziland, Africa, and two other accredited U.S. facilities to provide a safe haven for 17 African elephants. The elephants had destroyed trees and other vegetation in the managed parks where they lived, making the land uninhabitable for more critically endangered rhinos. Swaziland managers planned to kill the elephants in order to focus on rhino conservation. The elephants were flown to the U.S. aboard a chartered 747 jet in a carefully planned operation, arriving March 11, 2016.

All three U.S. partner zoos – Dallas Zoo; Henry Doorly Zoo in Omaha, Neb.; and Sedgwick County Zoo in Wichita, Kan. – have expansive new habitats that set the standard for an advanced way of managing elephants in human care, allowing for socialization, herd behavior and extensive walking. Public support for the rescue has been overwhelming, given the critical situation in the animals’ native land. African elephants face many threats, ranging from human encroachment on their habitat to extreme poaching, which claims the life of nearly 100 elephants every day.