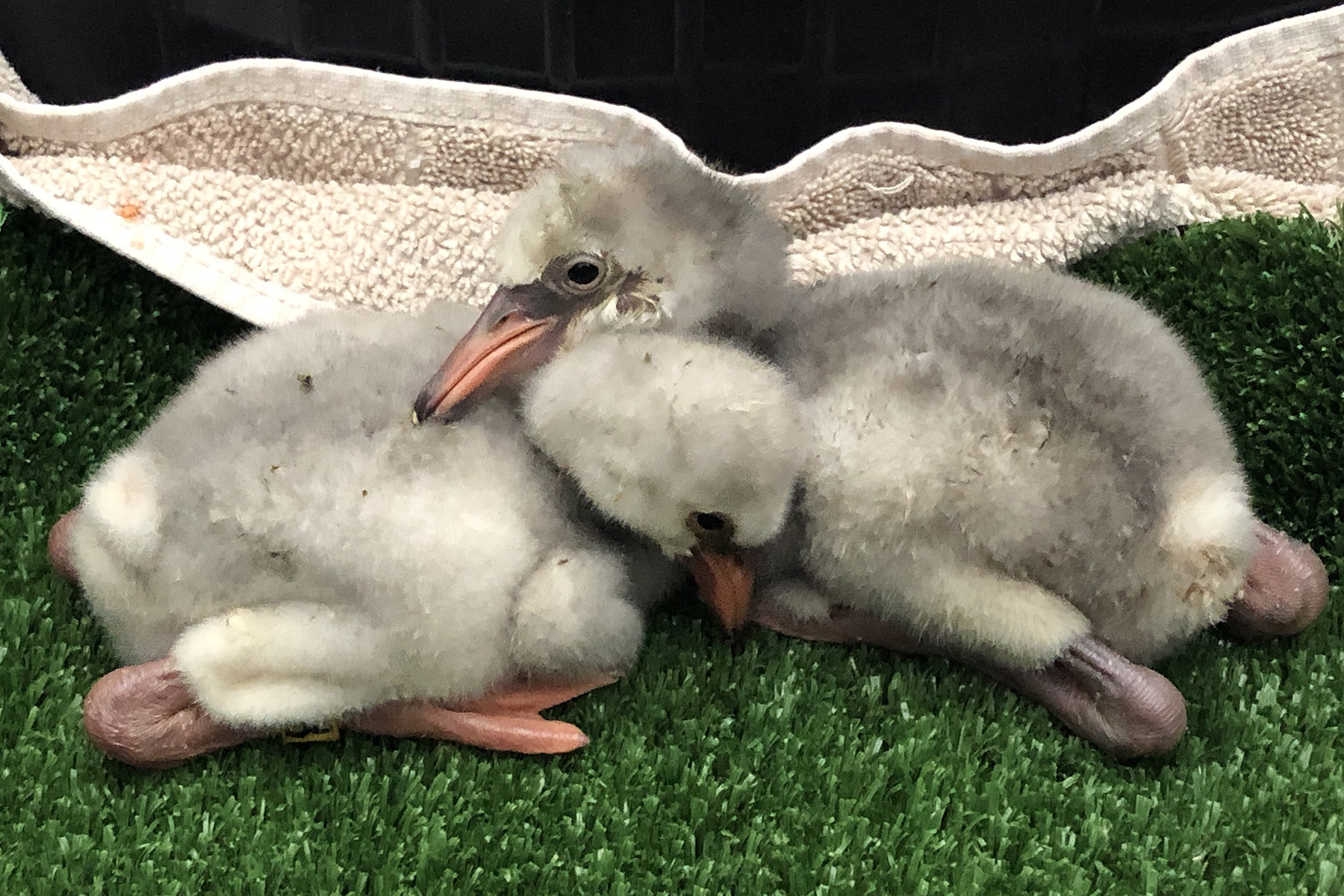 Two of the rescued lesser flamingo chicks cuddle up at the SPCA in Kimberley, South Africa.

The most urgent, wide-scale rescue of wild lesser flamingo chicks in South Africa is underway after 1,800 chicks were found abandoned at their nesting grounds. The international zoo and aquarium community has joined forces to help save the chicks in a massive rescue operation, sending critical funds and avian experts from across the world to South Africa.

A severe drought has affected Kamfers Dam in Kimberley, the capital of the Northern Cape Province of South Africa, causing adult flamingos to abandon their nests, leaving thousands of eggs and chicks behind. With only four breeding colonies of lesser flamingos in Africa and one other in India, Kamfers Dam is one of the most important breeding locations for this species in the world. 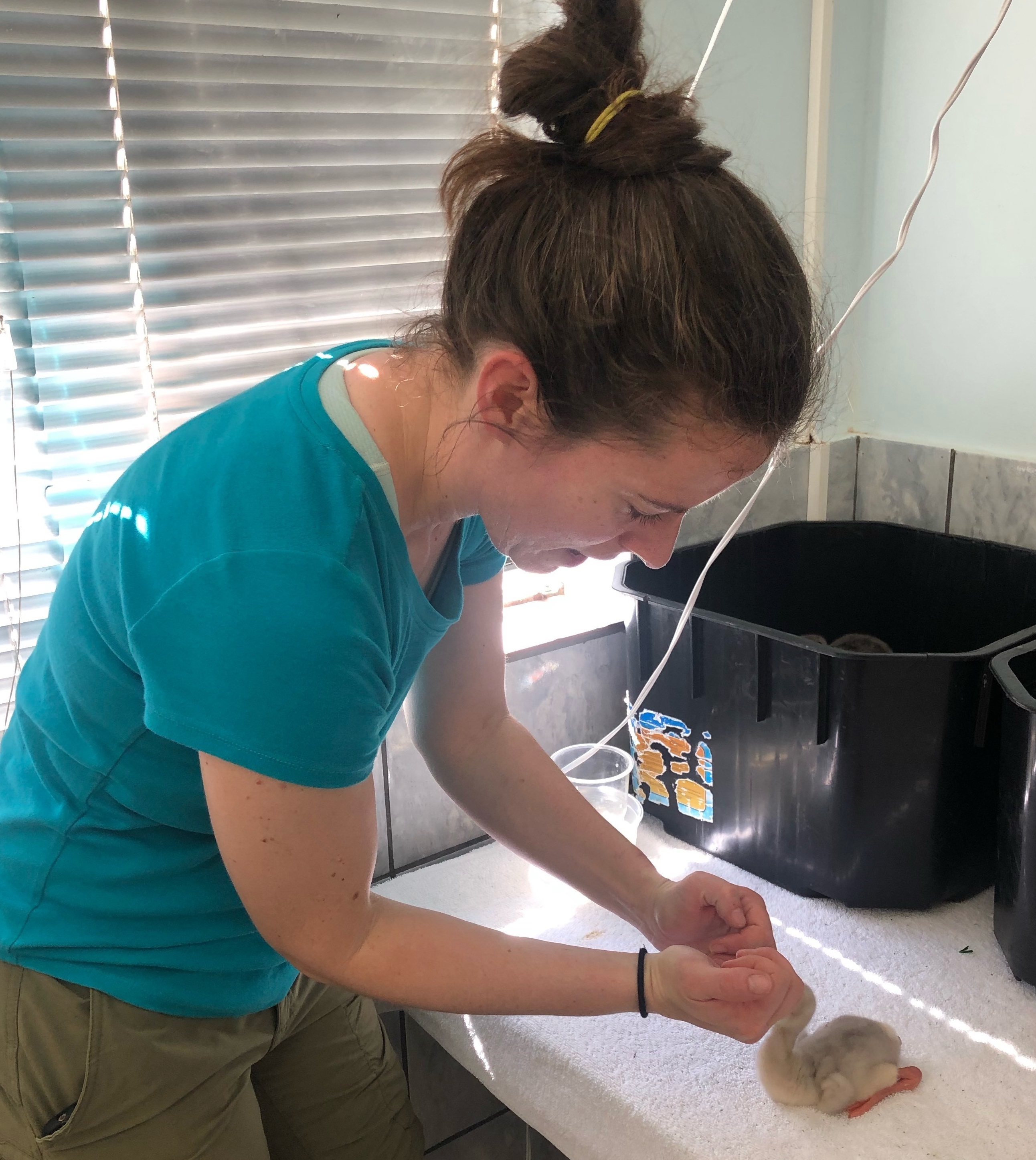 The Dallas Zoo is leading an emergency rescue effort to funnel funding to South Africa in coordination with the Pan African Association of Zoos and Aquaria (PAAZA). The Dallas Zoo has contributed $18,500 to the rescue effort, and is sending multiple waves of support staff to Kimberley. Animal Care Supervisor Kevin Graham and Senior Zoologist Julie Farrington arrived in Kimberley last week, and Dallas Zoo veterinarian Dr. Marren Connolly and veterinary technician Cassandra Reid arrived Sunday and will remain there for three weeks.

Multiple accredited U.S. zoos and aquariums have also contributed nearly $20,000 to the rescue mission, with donations continuing to roll in. (For individuals who would like to donate to the recovery effort, please do so HERE.)

“If the zoo community had not stepped in to help, it is unlikely these chicks would have survived,” said Harrison Edell, Dallas Zoo’s Executive Vice President of Animal Care and Conservation. “Flamingos have rarely been treated in any significant numbers by wildlife rehabilitation facilities. Since we are backed with decades of experience in this, our animal care experts are uniquely qualified to assist in hand-rearing these orphaned lesser flamingos. The world’s accredited zoos and aquariums are no doubt at the forefront of lifesaving conservation work, and we will continue to send our experts to the frontlines when animals need help.”

“To see our worldwide community of wildlife conservationists come together to save these birds from near death is remarkable,” said John Werth, Executive Director of the Pan African Association of Zoos and Aquaria (PAAZA). “Zoos and aquariums have the resources and expertise to save species and our swift action to protect these flamingos is proof of that.”

The 1,800 chicks are being cared for at a number of PAAZA accredited zoos and aquariums, plus, certified partners like SANCCOB, as well as, by staff at the SPCA in Kimberley. An international team of conservationists, zoologists, vet staff, and more are working around the clock to bring the chicks up to good health. The ultimate goal is to release the birds that have been successfully rehabilitated back into their natural habitat by late May, so they can rejoin the flock.

“We’re working 12-hour shifts at the SPCA in Kimberley where the youngest and most critically ill flamingo chicks are being cared for,” said Kevin Graham, Dallas Zoo’s Animal Care Supervisor of Birds. “We hand feed the chicks every few hours, and are constantly monitoring their health. We are running on very little sleep but it’s extremely rewarding work knowing we’re keeping these incredible birds alive.”

With nearly 20,000 birds nesting at Kamfers Dam, a significant hit to the flock could pose long-term problems for the population without intervention. Conservationists are working to implement a detailed plan of action for the future, should a rescue mission like this occur again.

Lesser flamingos are currently listed as near threatened by the International Union for the Conservation of Species (IUCN), primarily due to habitat destruction and climate change. It is the smallest species of the six species of flamingos in the world. They’re found primarily in sub-Saharan Africa and some parts of India.

The Dallas Zoo cares for more than 30 lesser flamingo chicks in the Wilds of Africa section of the zoo.