Winspear & Amani: From babies to boys

Cheetah Winspear and Labrador retriever Amani aren’t your average BFFs. Some assume it’s unusual for cats and dogs to form close bonds, but these boys have been inseparable since the day they met. Slobbery kisses are frequent, playing is constant, napping together is the norm, and sticking by each other’s side is for life.

With fewer than 10,000 cheetahs left in the wild, the world’s fastest land mammal is racing against extinction. Winspear and Amani were brought together as babies to help teach the public about the serious threat wild cheetahs face. Winspear is an incredible ambassador for his species. Together, they’re helping the public make genuine connections to Africa’s most endangered cat.

In the wild, male cheetahs naturally form bonds with their brothers – it’s called a coalition. Born just three days apart and living together since they were six weeks old, Amani has grown up as Winspear’s brother, forming their own coalition.

Amani helps Winspear feel calm and safe in public settings, since cheetahs are naturally shy, submissive animals. Can you guess who takes the alpha role in this relationship? Yep, Amani’s the canine in charge.

These boys live together full time and travel to schools, hospitals, and events in North Texas, spurring real conversations about how to help cheetahs in the wild. They also can be seen five days a week at the ZooNorth Cheetah Encounter.

We couldn’t be more proud of the bond they have and the story they’re sharing. Winspear, who was born July 8, and Amani who was born July 10, will celebrate their second birthday together on July 11. Please join us at the Cheetah Encounter this Saturday at 9:45 a.m. as these BFFs devour their birthday cake.

And enjoy this slideshow of the duo who’ve grown up before our eyes these past two years!

Dallas Zoo keepers are fully responsible for their animals, from their health to their habitats. This two-part series explores how some keepers care for the areas that are home to our residents. PART ONE: The lion-cheetah exhibit.

It’s 6:45 a.m. when Sara Hamlin parks behind the lion and cheetah quarters. She’s followed closely by Becky Wolf and Sara Squires, the two primary keepers of these big cats. The sun is just rising and the lions are roaring.

“They’re just saying good morning to each other,” Hamlin explains. She’s been a part of the Dallas Zoo staff for just 10 days, and she’s already used to the noisy greetings. Or maybe she remembers the male lions, Kamaia and Dinari – she used to work at the zoo where they were born. “I got to watch them grow up, and it’s nice to see them again,” Hamlin says.

The two cheetahs are allowed night access to their habitat, so the first task is to bring them inside so it can be cleaned and restocked. As with any task directly involving the big cats, the keepers work in pairs – a door can’t be opened without one keeper announcing the action and the second keeper replying with an “OK.”

Keeper Sara Hamlin trims the bushes in the lion habitat before opening./Dallas Zoo

When the siblings are inside, Bonde lies down next to his sister Kilima, and starts vocalizing. He’s ready for breakfast, which has been prepared the day before. The cats are weighed every two weeks, and the Zoo’s nutritionist determines how much food they’ll get. Some guests ask if our cheetahs are underfed, but these cats – with a lean body built for speed – are kept at a healthy weight.

Once the first round of food has been delivered, the keepers move into the habitats to begin cleaning. They mow every two weeks, trim bushes and trees, scrub the inside of the glass, clean any mess the animals have made, check the levels in the pool and water bowls, and set out enrichment items for the day. Enrichment is a process by which keepers enhance the animal’s environment by adding scents, toys, sounds, food, substrate and other items to encourage natural behaviors and keep them physically and mentally fit.

The cheetahs, for example, love the smell of certain human perfumes. The keepers occasionally spray it in a patch of grass, and the cheetahs will rub their faces in it and roll around. Other enrichment items include empty ostrich eggs and small hay piles once used as zebra beds. Because the keepers schedule the cats into each habitat, the food and enrichment they put out vary from day to day. The whole cleaning process can take up to two hours, including a perimeter check of the entire habitat.

Before the lions are let out in the morning, they have a quick training session, which lets the keepers check their 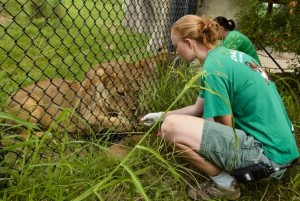 Final step in the morning routine: keepers Becky Wolf & Squires feed the lionesses after they’ve shifted into the habitat./Dallas Zoo

overall health. They may examine the cats’ teeth and feet for problems or sores, and if one is detected, they apply medication with an oversized cotton swab if necessary.

As the keepers move behind the scenes, all three constantly check and doublecheck doors and locks. “Being [obsessive] can actually be helpful, because you have to do the same thing over and over again and you can’t forget,” Squires says. The keepers also perform a “positive head count,” going into the public viewing area and locating all of the cats (two cheetahs and two lions or lionesses), confirming that they’re safe in their habitat.

The animals are good at being where they need to be. If any of the cats are a bit slow to move in the morning, the keepers encourage them by setting out more meat treats – but they never yell or touch the animals. Dallas Zoo keepers won’t punish animals for challenging behavior. Instead, they ignore the cats until appropriate behavior is observed, then the keepers respond and reward appropriately.

As demonstrated by the public training sessions, rewards always come with good behavior. “Everything we do is training for them,” Squires says. The keepers are constantly aware of how their actions are perceived or may be reinforcing to the animals. For example, if one of the lions is pawing at or banging on a door, the keepers wait until they stop banging before they open the door. If the keepers open the door when they are banging, the cats will continue to do it. So the undesired behavior is ignored, and good behavior is rewarded.

COMING UP: The gorilla habitat. 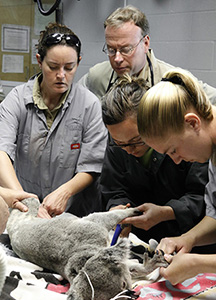 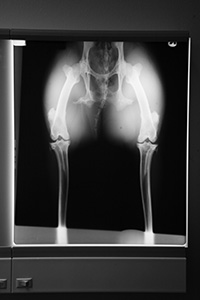