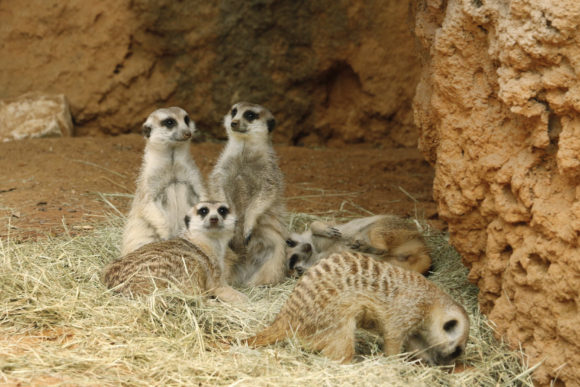 The five members of our meerkat mob!

Our five meerkats (males Orbee and Widget; and females Poppet, Huxley, and Twig) are working hard on their crate and station training, which will make it easier for our vets and keepers to perform routine health care and check-ups. These cute little predators are officially able to enter crates to receive their monthly vaccines, which keeper Amberlee B. tells us wasn’t always smooth sailing:

“It required two keepers and was usually chaotic, with the meerkats popping in and out of the crates constantly. It made it difficult to keep track of who had actually received their medication, and who had not.”

Meerkats are vocal animals and operate in a matriarchal group, also known as a “mob.” Poppet acts as our mob’s alpha female. She’s known to be very smart, and picks up on new things during training sessions quickly. Poppet, Orbee, and Widget are known to keepers as the “trouble makers.” Sometimes the trio will even climb on top of one of their tortoise neighbors.

As you might imagine, training these quirky ‘kats can be tricky. To get them used to entering crates, the meerkats were presented with a high-value reward (keepers discovered they loved ground meat, similar to what we feed our big cats) each time they entered the crates. Animal staff then worked get them to stay in the crates for longer periods of time, until finally they were able to comfortably and quietly remain in the crates long enough for keepers to apply their monthly flea/tick treatments. 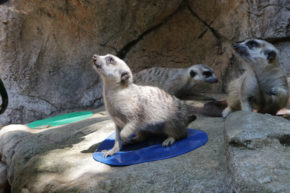 A meerkat waits patiently for his reward during a recent station training session.

Keepers are also currently using a similar training approach to work on station training. For this behavior, each meerkat has their own colored spot marker to sit on. This has proven essential to the meerkat care team! By putting the markers on top of a small scale, they have successfully recorded weights on all five meerkats. “This was something we have only been able to do during the check-ups, which happen about twice a year,” Amberlee says. “By having more up-to-date weights, we can adjust their diet as needed to keep them at a healthy weight.”

Visit our meerkat mob on the Gorilla Trail in the Wilds of Africa, and stay a few minutes to observe their frisky antics!