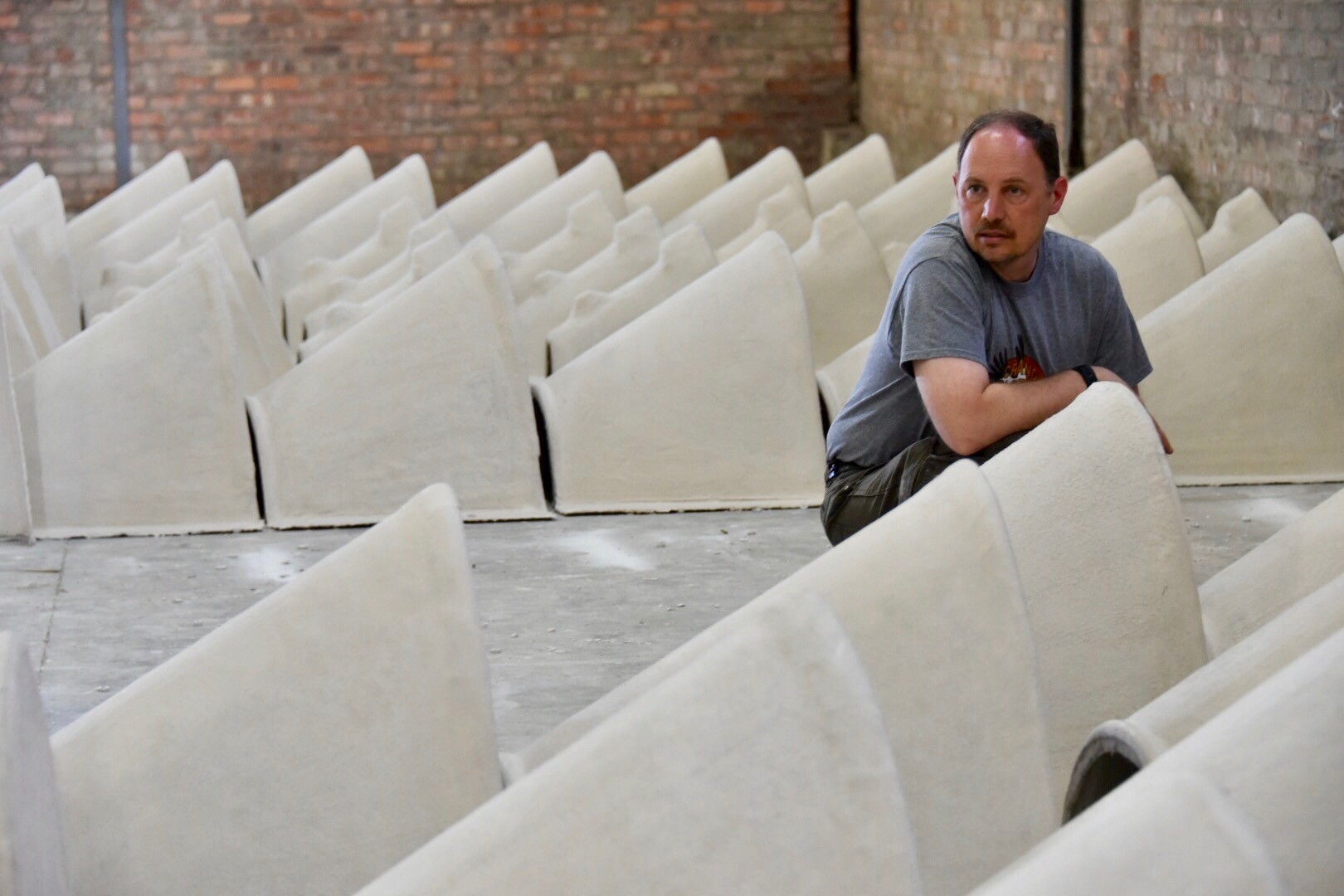 Animal Care Supervisor of Birds and the Artificial Nest Development Project Coordinator for the Association of Zoos and Aquariums (AZA), Kevin Graham, guest blogs on ZooHoo!

Our time caring for the 1,800 rescued little stinky grey and fluffy birds (a.k.a. flamingos) came to an end yesterday, and we’ve moved on to the bigger stinky black and white birds (a.k.a African penguins). We’re about to depart on helicopter to Bird Island, where we’ll make about a half-dozen trips back and forth to the deserted island that will be our home for the next four days. This is where we’ll install hundreds of artificial nests for the penguins to safely lay their eggs in and rear their offspring.

But first, we worked on an incredible side project today at the penguin nest manufacturing facility in Cape Saint Francis, South Africa. I was able to inspect the work being done, and talk with the folks who have been building the nests, since the manufacturing site opened up a little over a month ago. This site is being coordinated under the watchful eye of Trudi Malan of Dyer Island Conservation Trust. This location is currently home to many tons of raw materials that are being converted into penguin nests at a rate of about 20 nests per day. While this doesn’t sound like a lot, these nests are 100% made by hand and have a very specific formulation of products that has to be prepared and a significant amount of materials that have to be worked in the exact order in order to properly build the nests. 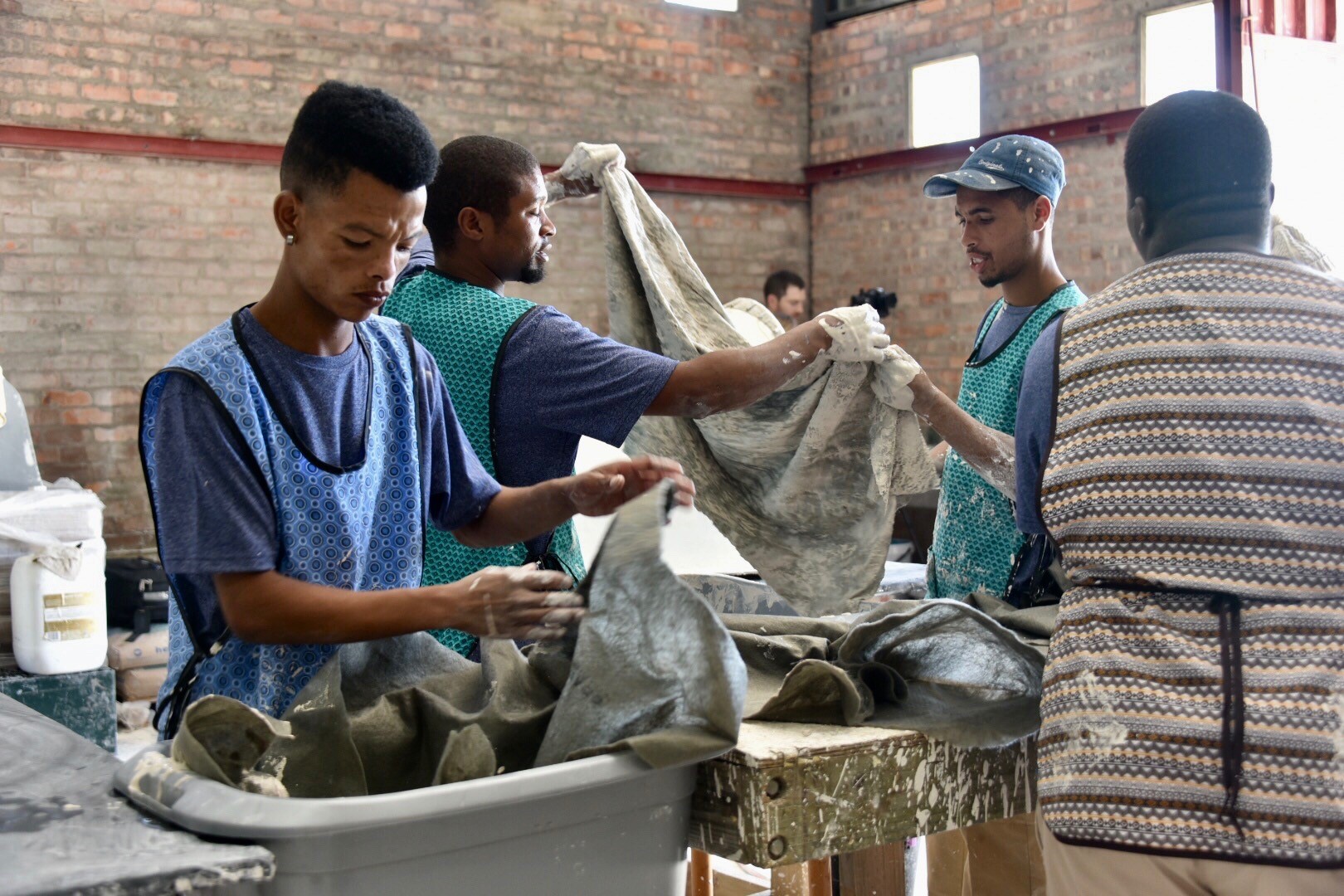 The construction team builds the nests, which involves a very detailed process.

The team members that are building the nests have not only become very efficient and skilled at the process, they’ve also begun to understand that the project they are assisting with is destined to make an improvement in the lives of an endangered species. These team members have a strong and growing pride in the work that they are doing and it shows. For many of them, this job is helping them learn new skills and offers them financial assistance. But more than that, they see their role of building the nests as a part of a bigger picture that can potentially save the lives of birds that desperately need help.

To construct the nests, they begin with preparing the Sealmac geotextile fabric cutouts, which will be used as the skeleton of the nest construction process. These individual pieces of geotextile fabric are then thoroughly impregnated in a ceramic slurry composed of a very specific ratio of several compounds. If the ratio of compounds is out of balance by even a small amount, the overall strength and integrity of the end product can be compromised. Each piece of the geotextile fabric is layered onto the mold in a very specific sequence, which builds up the integrity of the structure. Once the numerous pieces of slurry-filled fabric are all securely in place on the mold, they cure for at least 24 hours until any further work can be done. 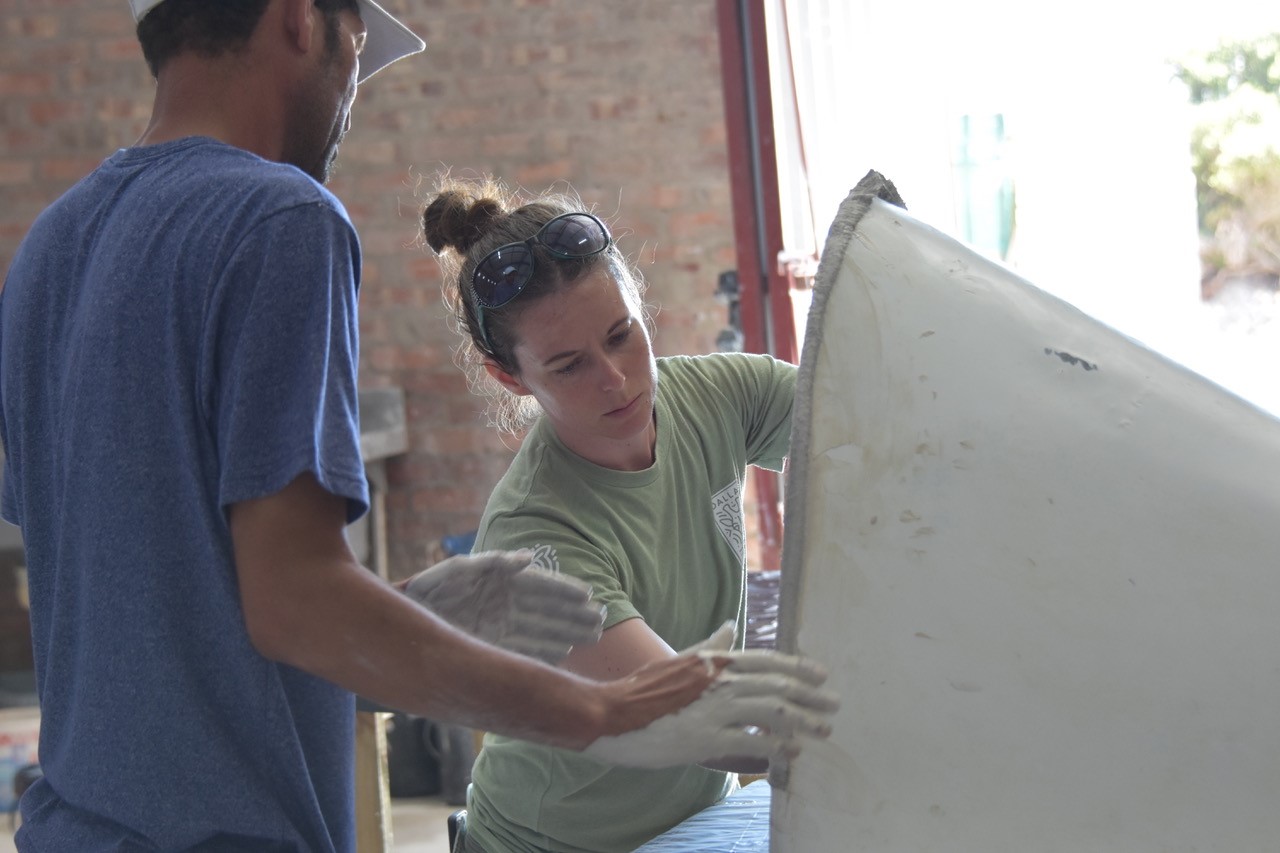 The next day the finished nests are removed from the molds and moved into the drying area to allow these completed pieces to continue curing for at least another 48 hours. Any work that is attempted during this curing time would have a strong likelihood of causing damage to the nest structure that would be very difficult to repair. Once a period of 72 hours minimum has passed, the pattern for the ventilation holes in the nest is traced onto the nest structure, and the ventilation holes are drilled. This pattern has been designed to increase the thermal venting of the nest structure on hot days and is a critical component in the thermoregulation inside the nest.

When looking at the end product of the nest, it doesn’t look like something that would be all that complicated, however there is a tremendous amount of science and research that went into the development of these penguin nests. Between the materials research; the design research; the multiple extensive rounds of testing; and finally the ongoing construction of the finished product that is beginning to be installed in colonies, this has been a very unique challenge. Recreating the perfection of Mother Nature is not an easy task, but thanks to the dedication of the nest project team consisting of members from Dyer Island Conservation Trust, Pan-African Association of Zoos and Aquaria, the Dallas Zoo/AZA SAFE, and especially those people and organizations that have believed enough in the potential of providing homes for endangered penguins, we are confident that we’ve come as close as possible.

Really early tomorrow morning (which will be really late at night for you guys in the U.S.), we’ll be departing for Bird Island to begin installing the first of the finalized nests in the colony there. Thanks to the ongoing support and assistance of ADDO SANParks, we will be transporting the nests and supplies over to Bird Island by helicopter. This saves a huge amount of uncertainty in access to the island since it’s a two hour boat trip each way in calm waters or up to a five hour boat trip each way in rough waters, which usually ends up with a large number of the team members leaning over the edge and relieving themselves of their breakfast. More to come later, assuming we survive.

There’s a whole lot more in the way of photos and videos to come, so stay tuned as I continue to update you with field notes on this unprecedented project to save endangered African penguins.