How to train a mongoose 101

Dwarf mongoose Happy waits for his food reward for stationing on the scale.

How in the world do you find out if a dwarf mongoose is pregnant?

You weigh her! And that’s also a great way to monitor an animal’s overall health.

But teaching these adorably sassy critters to sit on a scale isn’t for the impatient. Luckily, the Dallas Zoo has keeper Sara Bjerklie, who’s developed a special relationship with Happy, Sleepy, Sally and Jada.

Since last fall, she’s worked diligently five times a week with the small African carnivores. The key: cat food. It’s part of the mongooses’ daily diet and is a delicious, motivating snack.

“It’s been fun to see their individual personalities come out during training,” Bjerklie said. “Happy lives up to his name and loves to train, just not always on his station. I like to think he has an excess of energy and just can’t stop moving. Sleepy’s the opposite, he’s a little shy guy. But with a lot of time spent together, he’s warmed up and we’ve created a great bond.” 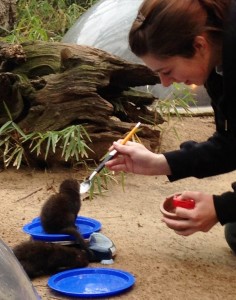 Mother and daughter duo Sally and Jada are typically the dominant pair in the pack. But they seem a little wary to train, and they took longer to grasp it.

The animals first trained on blue plates placed on the ground, and Bjerklie would ask them to “station” on their individual plate. As progress was made, she moved the plates on top of a small scale. And voila, we have weights! Kudos to Sara on her skill – and her persistence.