Posted on November 3, 2016 by Jessi Vigneault 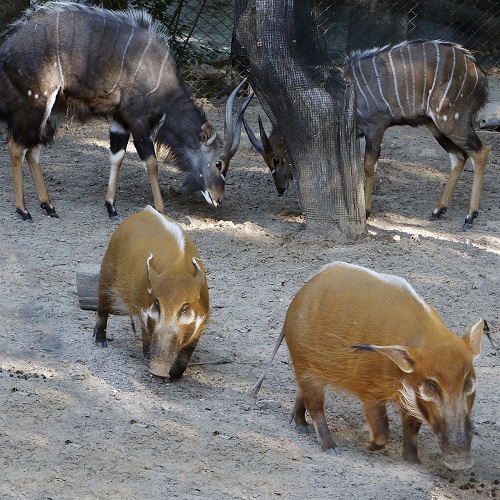 Just as if you were to put groups of Longhorns and Aggies in a room, getting a nyala herd to coexist peacefully with a sounder of red river hogs can have its challenges, especially when males are involved (sorry, guys).

The Dallas Zoo wanted a new home for its male and two female red river hogs, and the nyala antelope habitat had some extra room to share. Both are African species, although they inhabit different parts of the continent. This new pairing required habitat modifications, new animal training, and a slow, very closely monitored introduction. Ultimately, it would be up to the animals to decide if it would work or not.

The habitat was great for our bachelor herd of four nyala, but it wasn’t quite ready for the rooting and digging habits of hogs, so underground rebar was added to reinforce the fencing. A log and rock barrier was built around the exhibit’s large pond, to prevent the hogs from falling in. And we constructed a concrete drinking bowl for the hogs, because they tend to play with anything light enough to move, including rubber water bowls. 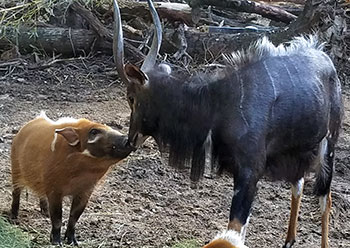 With the habitat ready, we worked on avoiding possible conflict at the gates when the animals “shifted” in and out between the exhibit and their night quarters. We ring a bell and reward the nyala with their favorite treats at the bottom of the exhibit. They quickly learned to come toward the bell when rung. This training provided us a method to pull the nyala away from the top shifting gate when the hogs would be let through.

The next step of the introduction was getting the hogs comfortable and familiar with the area before meeting the nyala. Using a corral made of cattle panels covered with boards and wire mesh, the habitat was divided in half and the hogs were given time to acclimate to each side. We introduced them to their own shifting cue by honking a horn and rewarding them when they shifted in and out.

Though the hogs and nyala can see each other in their night quarters, we also gave them a chance to see and smell each other up close with the protection of the corral. We believed this interaction would give some indication of how the two groups would co-exist. There was some interest from both groups, but no aggressive behaviors were observed, and they soon ignored each other. This was a good sign, so we decided to move forward.

Log piles and large branches were placed around the habitat, so animals being chased would have something to put between them and their pursuer. The corral panels were removed to open the space up so individuals couldn’t be trapped.

It can be hard to predict how animals will react during new introductions and we always prepare for incidents, but this went extremely well. There were a couple of brief disagreements, but no chasing or serious altercations. As a result, the hogs now enjoy spending time in a new home with new friends.

Letting the animals become accustomed to their new surroundings and the sight and smell of other animals before putting them together help ensure successful introductions, and we greatly appreciate the patience of our visitors during this process. Next time you visit the Dallas Zoo, be sure to ride the Adventure Safari monorail and see how the nyala and red river hogs are doing together! 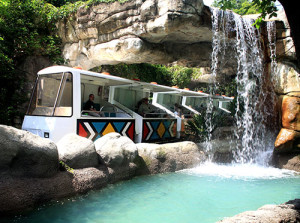 The Monorail Safari will remain closed while the Dallas Zoo brings in outside experts to collaborate on a top-to-bottom evaluation of the popular people-mover, which serves more than 200,000 visitors each year.

The monorail halted Wednesday after an off-site voltage surge from an Oncor feeder line. The heat was not a factor, nor did the train malfunction; it’s designed to stop after a significant power event. The 48 passengers and the driver climbed down 12-foot ladders. The evaluation will explore why the train remained stopped after the power supply was restored and examine the overall electrical systems and components of the entire monorail.

“Our emergency plan worked exactly as it should have Wednesday during this unfortunate incident,” said Gregg Hudson, president and CEO of the Dallas Zoo. “However, as one of the nation’s leading zoos, we won’t rest until we get answers about anything that affects our visitors’ experience. This comprehensive evaluation will give us the information we need to decide about the monorail moving forward.”

The zoo has reached out to several firms specializing in public conveyances and anticipates having a contract signed next week. The evaluation is expected to take several weeks.

Zoo members may exchange their monorail coupons for free rides on the Safari Express mini-train on Picnic Ridge.

The Monorail Safari includes three low-speed electric trains, each with 13 cars that move at 3 mph. It runs on a one-mile loop around the back side of the 106-acre zoo, allowing visitors to see six habitats not accessible by foot: mountain, woodlands, river, arid, semi-arid and bush. It also circles above the Chimpanzee Forest, Nile crocodile pond and Penguin Cove. It’s one of just a few in the nation that goes uphill and downhill; the inclines are necessary because the Dallas Zoo sits on a hilly, heartland prairie forest.

The 24-year-old monorail has been upgraded through the years with updated components, including the electrical system and the 12 motors that propel each train. These efforts have extended the monorail’s lifespan significantly. Repairs and updates are performed by the zoo’s experienced eight-member team of mechanical and electrical experts, which also works with outside consultants as needed.

“Our monorail team is experienced and creative,” Hudson said. “Most have been working with this train for more than a decade, so they’ve very familiar with it. Their hard work is the reason why millions of visitors have been able to experience the Monorail Safari over the past 24 years. We are willing to do whatever it takes to ensure that our guests are not inconvenienced by another unexpected stoppage.”

An off-site power surge is believed to be the reason the Dallas Zoo’s Monorail Safari electric train stopped today with 48 guests and one driver on board.

The monorail slowed to a halt at 11:37 a.m. about 12 feet off of the ground in the Woodlands habitat. The train is designed to stop with an electrical issue, including a power surge. The zoo’s Guest Services team immediately provided water and snacks to the guests on board while engineers tried to restart the train. When the monorail was unable to be restarted quickly, zoo officials requested assistance from the Dallas Fire Department to carefully remove passengers from the train.

Dallas Fire responded within minutes and helped passengers climb down on ladders. All emergency procedures worked as they were supposed to and all guests were evacuated in a very orderly and safe manner. The Dallas Zoo appreciates the experience and professionalism of the Dallas Fire team, as well as the calm response of our guests aboard the train.

The monorail will remain closed through Friday while the zoo’s engineering team inspects the three trains and the track to ensure that no electrical damage has occurred from the surges, which are common in Texas during hot summer months.

The stoppage occurred under large trees that provide shade over most of the train. The cars were facing the habitat housing the zoo’s new baby eland, which was quite curious about the hubbub and provided the guests with a special view of the calf and her parents.

The popular Monorail Safari is 24 years old and remains a guest favorite, with hundreds of thousands of riders each year. Long-term, the zoo is looking at options for the Wilds of Africa habitat which the Monorail overlooks, which would include replacing the monorail. As a non-profit zoological park, private funding would be required for such a project.