Sweating for the love of tigers

It’s not every day Malayan tiger Batu searches his one-acre habitat for dozens of hidden meatballs. But when 25 volunteers spend four hours cleaning it, they get the special task of hiding his food and watching from a behind-the-scenes location as he enters to find it.

“Hiding Batu’s food was the best part,” said 16-year-old volunteer Cierra Smith-Vaughn. “The keepers said he can stand nine feet tall, so I tried to hide it as high as I could.”

Our wonderful volunteers put in much appreciated work that would have taken our zookeepers triple the amount of time to complete. Here’s the roundup:

“I came because I know the keepers needed help and it’s a beautiful day,” said volunteer Caroline Moore. “I could volunteer anywhere else, but I want to be here. I love the Dallas Zoo.”

And it’s selfless volunteers like neighbors Cierra and Caroline, who drove from Fort Worth to spend their Saturday putting sweat, hard work and a lot of laughter into cleaning our tiger habitat.

The volunteers also received a behind-the-scenes tour of the tiger and otter night quarters, plus a free breakfast. For more information on becoming a Zoo volunteer, click HERE.

On the other side of the world, orangutans, tigers and many other animals are losing their rainforest homes so we can eat food and use products that contain a special ingredient that grows in their habitats – palm oil.

Palm oil is obtained from the fruit of the African and South American oil palm tree. Today, it’s found in about half the products sold in grocery stores, everything from cookies to toothpaste. Conflict palm oil production is connected to major issues, including habitat loss, climate change and more, as rainforests in countries like Indonesia and Malaysia continue to be wiped out to make room for new palm oil plantations. In fact, palm oil production is now one of the leading causes of rainforest destruction worldwide.

But there’s something we can do. With the help of one of the Dallas Zoo’s own zookeepers, big snack food companies are starting to change how they produce palm oil.

Tiger, primate, and otter keeper Stacy Lupori is an action team leader for Rainforest Action Network (RAN). Right now, Lupori is helping coordinate a social media campaign called “The Last Stand of the Orangutan.” With only about 60,000 orangutans left in the wild, one of humankind’s closest kin are on the brink of extinction if their homes continue to be destroyed.

“We’re not asking these companies to stop using palm oil – that’s not going to happen. We’re pushing them to be sustainable,” Lupori said. “A lot of companies choose to go in and slash and burn the rainforest and all the animals that live there, but there are much better ways to do it.”

So far, more than 300,000 people from all over the world have flooded the Facebook, Twitter, and Instagram pages of what RAN has dubbed the “Snack Food 20.” These 20 major U.S. companies were selected by RAN for harvesting conflict palm oil. The campaign lets people submit a photo of their hand, labeled with the hashtag #InYourPalm. Through increased consumer pressure, the goal is to get the Snack Food 20 to change how they grow palm oil.

RAN is asking the Snack Food 20 to implement a palm oil procurement policy to ensure that the oil it sources is fully traceable, legally grown and from verified responsible palm oil producers not associated with deforestation.

Some of the companies already have agreed to change their policies to eliminate conflict palm oil. However, those steps won’t be taken until 2015. “We all know just because a company says they are going to do something doesn’t mean they will,” Lupori said. “Until these policies are put into effect and are traceable, we still need help putting the pressure on them.”

RAN’s campaign won’t end until all 20 companies have responsible palm oil polices in effect. For Lupori, it’s a lifelong commitment. “As a zookeeper, it’s not just about taking care of these tigers. It’s mostly about conservation,” she said. “This means nothing if I’m not doing something to preserve them in the wild. I look at them, and it breaks my heart to think that if conflict palm oil doesn’t stop, they may not be around in 10 years. And that’s why I’m not going to stop.”

This Halloween, we ask you to buy sustainably produced candy. And we challenge you to post your #InYourPalm photo to Instagram and Facebook, along with a photo of your conflict-free Halloween candy. Our colleagues at the Woodland Park Zoo have put together a great candy list, and it includes many of the most popular ones: http://www.zoo.org/document.doc?id=1423 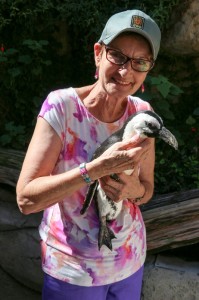 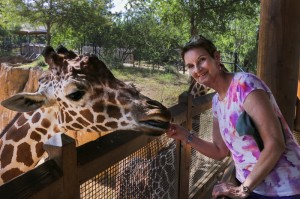